The wolf tracks appeared as they always do, as a surprise.

On a day between fall and winter, with the leaves fallen and browning but the ground not yet hard, I was walking with my dog and an a.m. radio. We were descending a four-wheeler trail on a hillside 20 miles from the nearest town, Minto.

The dog was exercising its need to move after a summer of walking across the state. The radio was there so I could listen to my Yankees, playing in Houston, where there was not a half-inch of snow on the ground. 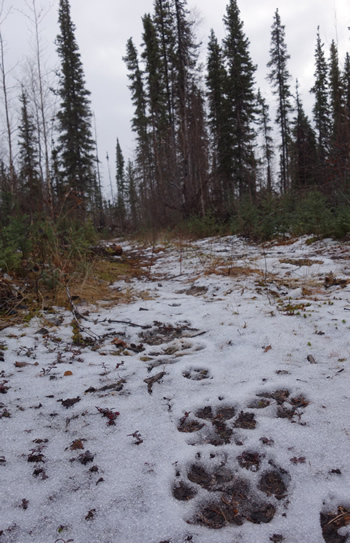 Before I saw the rounds of hand-size tracks, heading toward us from the basin of the Tolovana River, Cora had tipped me to sign of her ancestors’ passage.

There on the cold, wet ground was a shallow wound of scratch marks similar to the ones Cora likes to make. The earth showed the rake of four chisel points, as wide as my outspread fingers.

There, I imagined the broad, muscled shoulders of a creature three times the size of Cora, who weighs 38 pounds. My scrappy hiking partner must have pictured it too. She sniffed the torn forest floor with unusual, silent contemplation.

We saw a fresh dropping. Its impressive diameter made me wonder if we were instead looking at bear sign. But as we walked on and the snow got thicker, we saw tracks of three or more wolves traveling together. Cora trotted over to a spruce trunk, stained minutes before when a wolf peed on it.

It reminded me of one difference between Alaska and anywhere else an American can call home: The presence of wild wolves, which roam the state everywhere except the Aleutians.

Out there, not far from Tolovana Hot Springs, I wondered if 1) the wolves had heard the radio play-by-play and 2) if I had anything to fear. I decided yes to 1, because the tracks were so fresh and had peeled from the trail so abruptly, and no to 2.

I based my lack of fear on previous experiences. The few times I’ve been lucky enough to see a wolf, the moment has been brief. This includes when I was jogging a mining trail above where Coal Creek flows into the Yukon River. I stopped to tie my shoe and happened to look to my right. A large gray wolf stared at me from a birch 20 feet away. It disappeared in less time than it took to write this sentence.

And there was the 100-pound male wolf, satellite-collared by a biologist in Yukon Charley Rivers National Preserve a few years back. He placed the collar on the tranquilized wolf in April. By late October, that animal roamed all the way to the Arctic Ocean in the Yukon Territory and made its way back to Alaska, where biologists found it starved to death (a common fate) near the Kanuti River. The wolf traveled more than 2,000 miles that summer. In the dozen times it came near enough to the Dalton Highway to sniff diesel and hear the rumble of trucks, the wolf never once crossed that road. It always backed off to the east.

“He may never have encountered a road or vehicles before,” said biologist John Burch, who in 2011 tracked that wolf. “Wolves are cagy and reluctant with things that are unknown. It helps them stay alive.”

Alaska’s 8,000 or so wolves stay hidden. Most of the time, we see fresh tracks and imagine shadows in the forest.

There are a few images that, when projected side-by-side, say something about the character of wolves. One is the nighttime map of North America. It is dense with lights on the East Coast and is peppered with them in the western U.S. The other image is the range map of the gray wolf. In areas not artificially lit, in a blob that extends from Alaska to eastern Canada and the Atlantic Ocean, the wolf lives. In places speckled with lights and the human infrastructure surrounding them, the wolf does not.