The city of Nome is located on the southern coast of the Seward Peninsula, approximately 540 air miles northwest of Anchorage. There are no roads connecting Nome to any major city in Alaska. Half of the 4,000 population are Native Alaskan Eskimo. The Eskimo people have lived in this region as an identifiable culture for at least 4,000 to 6,000 years; the earliest documented evidence of human habitation dates back 10,000 years. Settlements concentrate along the coast and river system, as the sea was and is the principal focus of human activities.

Nome has a unique combination of traditional Eskimo culture and a gold rush past. Rent a vehicle and tour the 300-plus miles of road system surrounding Nome. Drive to the Eskimo village of Teller, see the many remnants of Nome’s gold rush past, and look for wildlife such as moose, polar bear, caribou, or musk oxen. Visitors can have a picnic at Salmon Lake Campground, go on a walking tour of Nome and visit the museum, shop for Native arts and crafts, or visit with the friendly residents. 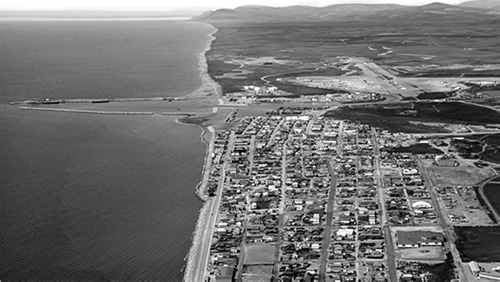 The Bering Strait region is located in Northwest Alaska, just south of the Arctic Circle. The region is home to three culturally distinct groups of Eskimo people. The Inupiaq reside on the Seward Peninsula as well as the King and Diomede Islands. The Central Yupik primarily reside in the villages south of Unalakleet. The Siberian Yupik live on St. Lawrence Island, and are closely related culturally and linguistically to the Chukotka people of the Russian Far East.

The Eskimo people have lived in this region as an identifiable culture for at least 4,000 to 6,000 years; the earliest documented evidence of human habitation dates back 10,000 years. Settlements concentrate along the coast and river system, as the sea was and is the principal focus of human activities.

Twenty tribal governments represent the 20 villages in the region. Of these villages, 16 are permanently inhabited. The IRA or traditional Council in each village appoints one representative, normally the Council President, to the Board of Directors. The councils themselves are the legal remnants of the Native traditional governments that provided social order prior to contact with non-Natives. These governments were subsequently reorganized and recognized as tribal governments under the Indian Reorganization Act of 1934.

Nome’s weather is dominated by the Bering Sea and can change quickly. In the summer, highs average in the mid-50s, with lows in the low to mid-40s. Highs may reach the mid-60s.
In the winter, the coldest three months are December through February, when the highs average about 13 degrees and the lows average a little below zero.
June will have the best combination of clear skies and warm temperatures. As the summer progresses, more rain can be expected.

Scheduled air service from Anchorage and Fairbanks. No roads into Nome.