Wolves are everywhere in Alaska – even in Anchorage

There are four subspecies of Canis lupus thought to occur in Alaska. Wolves are members of the Canidae family. Recent studies of skull characteristics, body size, and color suggest that differences are slight with considerable overlap in the characteristics of wolves from various areas. Only two Alaska subspecies are now recognized. Wolves in Southeast Alaska tend to be darker and somewhat smaller than those in northern parts of the state. The pelt color of Alaska wolves ranges from black to nearly white, with every shade of gray and tan in between. Gray or black wolves are most common, and the relative abundance of each color phase varies over time and from place to place.

Most adult male wolves in Interior Alaska weigh from 85 to 115 pounds, but they occasionally reach 145 pounds. Females average 10 to 15 pounds lighter than males and rarely weigh more than 110 pounds. Wolves reach adult size by about 1 year of age. 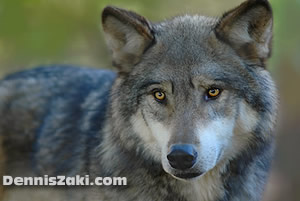 (From Alaska’s Department of Fish and Game) – Wolves are common over much of Alaska, especially in non-urbanized areas. They are the wild ancestors and genetic source of all modern breeds of domesticated dog. Their life history is both familiar to many of us and quite distinct from that of their domesticated brethren.

Living and Camping in Wolf Country

Because wolves are widespread, thousands of people live, work and enjoy outdoor activities in wolf country. Wolves rarely act aggressively toward people, but there have been instances in Alaska and Canada where wolves have attacked people. The first case of wild healthy wolves killing a human in modern North America occurred in Saskatchewan in 2005; a second person was killed in 2010 in Alaska. Several other incidents of wolf aggression have resulted in serious injuries. Some people in recent years have even had worrisome encounters with wolves while in suburban settings.

People enjoying wilderness activities must be aware that all large wild animals, including wolves, present some risk to human safety. When you go into the wilderness, which in many Alaskan cities is just outside your back door, go prepared. It’s safer to travel with someone else rather than alone. In our urban environments we often don’t pay much attention to what goes on around us, but a key to safety in the wild is awareness. Develop a habit of scanning your surroundings, don’t become so focused on an activity that you put yourself at risk for a close encounter with a mother moose, bear, or curious wolf. Naturally you should closely tend children and pets, maintain clean camps and do not store food where it is accessible to wild animals.

Hearing a howling wolf or seeing a traveling wolf pack can be an exhilarating wilderness experience and should be enjoyed, but everyone who leaves the beaten path behind must take on the responsibility to ensure their own safety.

If you encounter a wolf or pack of wolves at close range do not run or turn away. If you are approached, act aggressively and maintain eye contact if the wolf is looking at you. Aggressively use poles, pepper spray, rocks, limbs, noisemakers or other handy items to discourage wolves. Carrying a firearm is not a bad idea, but do so only if you are qualified and comfortable with the use of your firearm, and if you are in an area that allows firearms.

In the event that you do have an encounter with an aggressive wolf: