Denizens of the deep sea

There are many odd sea creatures in the cold and icy waters of Alaska. They’re weird in good ways, and they’re weird in bad ways. But most importantly, they’re just WEIRD. Really weird. The Ratfish, Ling Cod and the Dungeness Crab are probably a few you haven’t heard of. These sea creatures live in very harsh environments. Most visitors to Alaska are familiar with the Octopus, Halibut, and the King Crab.

Here we have some information on a few of the oddest looking creatures you’ll ever see.
The Sea Life Center in Seward is the place to go to see Alaska sea creatures.

The Halibut has both eyes on the same side of its head. They are among the largest fish in the sea and the largest of all the flatfish. They can grow to more than 8 ft long and 700 lbs. Halibut weighing in at more than 100 pounds are often called “Whales”, “Soakers”, or even “Barn Doors”, while smaller halibut, less than 20 pounds, are often called “Chickens”. The largest halibut ever caught while sport fishing was 459 lbs. in Unalaska Bay.

Found in deeper waters offshore, between about 300-900 feet in the Bering Sea, Aleutian Islands, and throughout the Gulf of Alaska; up to 3 feet in length. 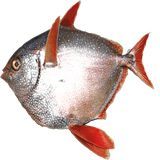 Also called moonfish, the Opah is a marine fish that can reach up to 200 pounds. The Opah are presumed to live out their entire lives in the open ocean. It’s found in the Gulf of Alaska and throughout the world but that which is available in the United States usually comes from Hawaii. The pinkish flesh of this fish is rich, full flavored and fine textured. It’s suitable for baking, poaching and steaming.

The largest and most impressive of all the crabs caught in the world. The king crab, as its name might imply, is the largest of all the commercially important crab species and is always in high demand. An adult king crab might reach lengths of up to 8 ft. King crabs are unique in that they have only 6 legs while most crabs have 8. There are several varieties of king crab: red, blue, and brown or golden.

Salmon sharks are large, powerful, warm-bodied, and streamlined predators adapted for high-speed swimming. Reports from the U.S. Navy have clocked salmon sharks exceeding 50 knots. This would make the salmon shark one of the fastest fish in the ocean. Most of the salmon sharks encountered in Alaskan waters are surprisingly uniform: over 93% are females ranging from 6 1/2 to 8 feet in length and roughly 300 pounds. Salmon sharks in the 700 pound range have been reported by sport fishermen in Alaska. The salmon shark is a member of the Lamnidae family of sharks which includes the great white shark, makos, and the porbeagle shark.

Salmon Shark Story submitted by reader Jan Harbour of Ketchikan, Alaska – In 1979 I was living in Cholmondely Sound on Prince of Wales Island and in August we were invaded by a large number of sharks following the salmon into the South arm, and at least one of them was slightly longer than my 13 foot Boston Whaler. He swam alongside me for awhile one day and was almost close enough to touch before executing a right turn directly under my boat and coming up in the wake and giving us (me and my children) a good eye-balling. Needless to say I headed for home.

The Ratfish is related to sharks and have rabbitlike faces, smooth skin and large green eyes. Their spotted, brownish bodies taper to a pointed tail. Their teeth are fused, forming a chisel-like plate. Ratfish swim just above the seafloor, searching for their next meal. They like to munch on crunchy food like deep sea crabs and clams.

Despite the implications of its name, the Lingcod does not belong to the cod family. It is actually a greenling. One of the most notable features of this fish is its great, gaping mouth with a projecting lower jaw and numerous sharp teeth. Lingcod are voracious predators and grow rapidly.

The Pacific Octopus, which is also called “devilfish,” is a predatory mollusc with a pouch-shaped body and eight powerful arms with two rows of suction discs on each. It also has an ink sac, which it uses to darken the water when it senses danger.

Octopuses are related to squids, cuttlefish, nautiloid, and other molluscs such as snails, mussels and clams. They can creep over hard surfaces using their arms; when they travel through water they move by jet propulsion, taking in water and ejecting it forcibly through a funnel as their muscular mantle contracts. They vary in size from a few centimetres to the giant octopus of the Pacific Ocean which can grow to over 30 feet!