The Alaska Marine Highway System is the best way to get a close-up look at Alaska incredibly beautiful coastline. The Prince William Sound ferry routes take you through the Gulf of Alaska and Lower Cook Inlet. Glaciers and fjords, concentrations of seabirds and marine wildlife may be seen at every turn. The AMHS ferry transits Prince William Sound daily during the summer, linking towns and villages and providing visitors access to a bounty of recreational and sight-seeing opportunities.

Kodiak and the Aleutians:

From the gentle coastal grasslands of its islands to the rumbling snow-capped volcanoes along its shores, Southwest Alaska is a region known for its spirit of adventure. Stretching from Kodiak Island to the Aleutian Chain, it is home to the largest brown bears in the world, as well as walrus, seals, dozens of species of seabirds, giant halibut and plentiful salmon runs. It also has many rich cultural and historical treasures. 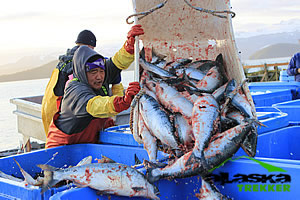 Cordova, Alaska was founded as a result of the discovery of high-grade copper ore at Kennecott, north of Cordova. A group of surveyors from Valdez laid out a town site and Michael James Heney purchased half the land for the terminus of the Copper River and Northwestern Railway after determining that Katalla was a poor harbor. In 1790 the inlet in front of the current Cordova townsite was named Puerto Cordova by Spanish explorer Salvador Fidalgo.

Homer’s picturesque setting, mild climate and great fishing attract thousands of visitors each year.Homer calls itself the “Halibut Fishing Capital of the World.” Kachemak is a magnificent deep-water bay that reaches inland from Cook Inlet for 30 miles and is rich in marine life. The wild timbered coastline of the south shore, across from Homer, is indented with many fjords and inlets that reach far into the rugged glacier–capped peaks of the Kenai Mountains. Rising behind the town site are gently sloping bluffs, which level off at about 1,200 feet. These green slopes are tinted in pastel shades by acres of wildflowers each summer. Perhaps the beauty surrounding Homer explains its large artist community. Potters, sculptors, painters and jewelers practice their crafts and sell their goods in local shops and galleries.

Situated at the head of Resurrection Bay on the Kenai Peninsula, Seward is one of Alaska’s oldest and most scenic communities. Known as the “Gateway to Kenai Fjords National Park” Seward is a picturesque town located 126 miles south of Anchorage. Visitors can easily reach Seward via the Seward Highway Scenic Byway, the Alaska Railroad, bus, air, or cruise ship.

At 3,022 feet, towering Mt. Marathon provides a breathtaking backdrop for the town. Behind Mt. Marathon and extending down the coast lies the Harding Icefield, measuring 35 by 20 miles. Flowing from the Harding Icefield are many glaciers, eight of which are tidewater glaciers, calving icebergs into the sea, reaching the coastline between Seward and Homer. Exit glacier is 9 miles from town. The SeaLife Center is at the edge of town.