An Adventure Any Time Of The Year 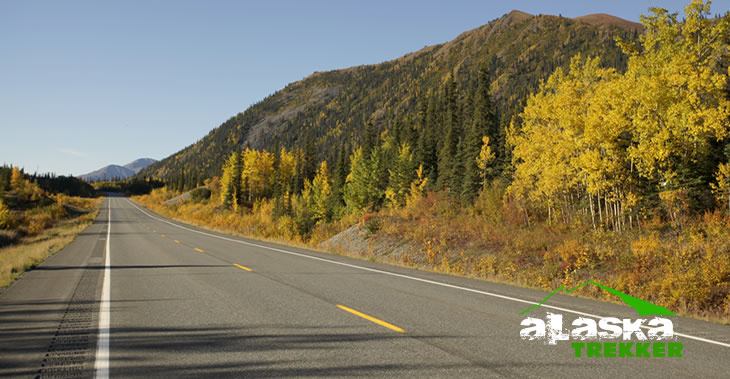 Before you start planning your trip down the Alaska Highway, get “The MILEPOST: Alaska Travel Planner“. It is an invaluable 768 page book that documents the entire trip including every gas station and motel along the way. The Alaska Highway (also called the ALCAN Highway) is a long 1,390 mile road stretching from Delta Junction, Alaska at its northwestern end to Dawson Creek, British Columbia, Canada at its southeastern end.

The road was originally built mostly by the US Army as a supply route during World War II. There were four main thrusts in building the route: southeast from Delta Junction, Alaska toward a linkup
at Beaver Creek, Yukon; north then west from Dawson Creek (an advance group started from Fort Nelson, British Columbia after traveling on winter roads on frozen marshland from railway stations on
the Northern Alberta Railways); both east and west from Whitehorse after being ferried in via the White Pass and Yukon Route railway. The U.S. Army commandeered equipment of all kinds, including local riverboats, railway locomotives, and housing originally meant for use in southern California. 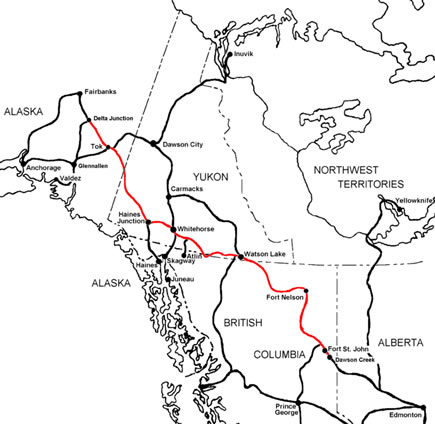 Although the Alaska Highway was completed on October 28, 1942 and was celebrated at Soldier’s Summit on November 21st (and broadcast by radio, the exact outdoor temperature censored due to wartime concerns), the “highway” was not usable by general vehicles until 1943. Even then, there were many steep grades, a poor surface, switchbacks to gain and descend hills, and few or no guardrails. Bridges, which progressed during 1942 from pontoon bridges to temporary log bridges, were replaced with steel bridges where necessary only. One old log bridge can still be seen at the Aishihik river crossing. The easing of the Japanese invasion threat resulted in no more contracts being given to private contractors for upgrading of specific sections.

In particular, some 100 miles of Alaska Highway route between Burwash Landing and Koidern, Yukon, became virtually impassable in May and June of 1943, as the permafrost melted, no longer protected by a layer of delicate vegetation. A corduroy road was built to restore the route, and corduroy still underlays old sections of highway in the area. Modern construction methods do not allow the permafrost to melt, either by building a gravel berm on top or replacing the vegetation and soil immediately with gravel. However, the Burwash-Koidern section is still a problem, as the new highway built there in the late 1990s continues to experience frost heave.

In Alaska, the distances and signs are posted in miles and miles per hour. However, Canada uses the metric system, so signs will be in kilometers (km) per hour. One mile = 1.6 kilometers. Also, gas in Alaska is measured in gallons, and in Canada, in liters. One gallon = 3.79 liters. In general, you should expect to pay around 15 – 20% more for gas along the ALCAN. American debit and credit cards are accepted everywhere along both the Canadian and the Alaskan portions of the highway, so you needn’t worry about exchanging currency.

Alaska Highway services during the summer:

During the summer, gas, food, and lodging are available about every 20 to 50 miles. Hotels, motels, campsites, and RV sites are open from May until September.

Alaska Highway During The Winter:

Winter services are VERY limited, especially food and lodging. Many gas stations are automated so a credit card is mandatory. Service hours are short and after 5pm it is pretty much credit card only. HEED THIS ADVICE: Get gas when you are near half a tank since several towns are entirely closed during the winter.

The Alaska Highway is plowed in the winter by both the Canadian and the Alaskan governments, so it is in good condition and driveable year-round. Keep in mind that some vehicles (especially older cars) have trouble starting in such cold weather. 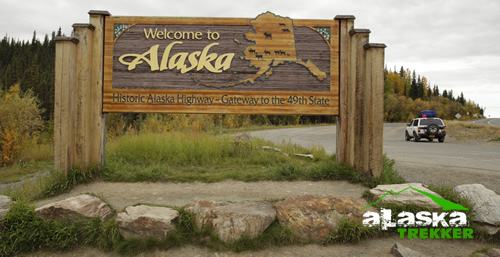 It is also important to note that many of the businesses (including gas stations and motels) along the highway close for the winter. So if you’re planning on stopping at motels on the way, call before your trip to verify that they will be open. In the winter, there’s a business open around every 100 miles or so. The The MILEPOST: Alaska Travel Planner lists all of them!
(Example: During a February 2012 trip, some gas stations were sold-out of fuel which made it 200 miles between fill-ups! It dropped to -54 F so screw-ups are not an option. Keep plenty of gas.)