The small town of Whittier Alaska is nestled at the base of mountains that line Passage Canal – one of the deepwater fjords of Prince William Sound, many with tidewater glaciers that calve before your eyes. Whittier Alaska is Anchorage’s portal to Prince William Sound. The surrounding peaks are snowcapped much of the year and a glacier hangs above the town to the west. Just across Passage Canal from Whittier is the Kittiwake Rookery, largest of its kind in the world. Fishing is a favorite pastime in Whittier Alaska with salmon and halibut derbies every summer. Whittier is also a berry picking paradise with blueberries and salmonberries growing in abundance at the edge of town. Whittier’s economy is comprised mainly of shipping and port related jobs, fishing and tourism.

Whittier Alaska, known as the Gateway to Prince William Sound, has excellent hiking with a great walk out of town and into the rainforest. Kayaking and scuba diving are superb, and the docks are packed with cruise ships and water taxis waiting to take visitors into the wildlife-rich waters of Prince William Sound. A variety of boats, large and small, depart from the small-boat harbor into the rugged and steep fjords that line the sound, many of them featuring glaciers deep inside. Most sail so close to a kittiwake rookery you can see the eggs in the nests of the black-legged birds.

Whittier is surrounded by steep mountains. They tend to trap storms over the town resulting in 15 feet of rain and over 20 feet of snow a year on average. Bring your jacket, sunshine in Anchorage doesn’t mean sunshine in Whittier.

This area originally was part of the portage route for the Chugach Indians of Prince William Sound traveling to fish the Turnagain Arm. Later the Russians and Americans exploring the region also used this passage. It was used by prospecting miners during the gold rush as it was the quickest passage from the Sound to the Cook Inlet and Interior regions. The city itself is a historical area, established by the U.S. Army during World War II. The Federal railroad to Portage was completed in 1943 and became the primary debarkation point for cargo, troops, and dependents of the Alaska Command.

In 1948 the military began construction of the first of two buildings for their military personnel as the Port of Whittier was then recognized as an ice-free, deepwater port strategically located to Anchorage and Interior Alaska. This remained active until 1960 at which time the total population was 1200. 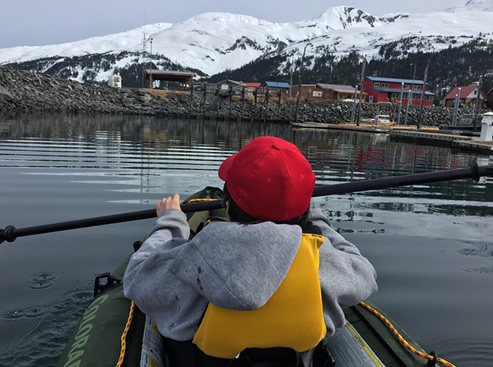 The City of Whittier was incorporated in 1969. Today, less than 300 people reside in the town supporting the Alaska State Ferry, the Alaska Railroad, freight barge, commercial fishing, the Small Boat Harbor, recreation and tourism with an annual visiting population of over 700,000.

To get to Whittier by road you’ll have to travel through the the longest (2.5 miles) highway tunnel in North America.
The Summer Schedule
Going To Whittier : Cars leave on the half hour, from 5:30am to 10:30pm.
Leaving from Whittier: Cars leave on the hour, from 6am to 11pm.
The tunnel trip is around 10 minutes and will cost you $13 per car (2019 price), return trip is free.

Situated at the head of the Passage Canal on the western edge of Prince William Sound, the community of Whittier is approximately 60 miles southeast of Anchorage.

By vehicle via the Seward Highway and Whittier Tunnel; Alaska Railroad from Anchorage; Alaska Marine Highway ferry from Valdez and Cordova.