The bear is everywhere in Alaska

A bear is quite easy to see on your visit to Alaska since we have more bears than any other state or province in North America with more than 40,000 brown/grizzly bears and 100,000 black bears roaming wild. There are four different types of Alaska bear. The Brown bear (grizzly), Polar bear, Black bear, and the Glacier bear. There are a number of Alaska bear viewing opportunities available to visitors. Denali National Park is one of the most popular areas in Alaska to view bears in their natural habitat. Each year tens of thousands of Alaska visitors board buses to travel all or part of the 90 mile road that travels deep into Denali Park. While bear sightings in Denali are by no means a sure thing, most visitors do see bears in Denali, although sometimes at a distance.

Grizzly bears once roamed all the western states from the Arctic Circle to southern California. Now this species is relegated to a few small strongholds in the lower 48, but Alaska still boasts historic numbers of these magnificent beasts. Biologists have estimated that the Alaska Grizzly population is holding strong at about 40,000 individuals, about 40 times the number in the rest of the United States. 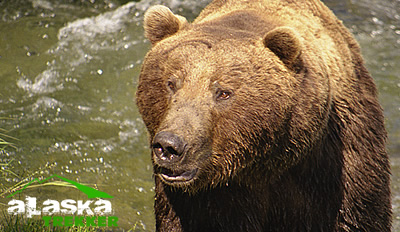 Grizzlies, called “brown bears” when they live near the coast, are wild creatures. But seasonal feeding patterns make it possible for relatively predictable viewing possibilities. Particularly in regard to coastal brown bears, which depend on the annual salmon runs as a mainstay for their diets. There are a number of areas in Alaska where bears congregate on rivers and streams. If you can visit these places at the right time, the viewing opportunities can be superb

As winter approaches, brown bears—often called grizzly bears—prepare for a long hibernation. During the fall, a brown bear eats practically around the clock, stocking up for the four to seven months when it’ll have to live off stored body fat. A grizzly may chow down on 90 pounds of food each day. 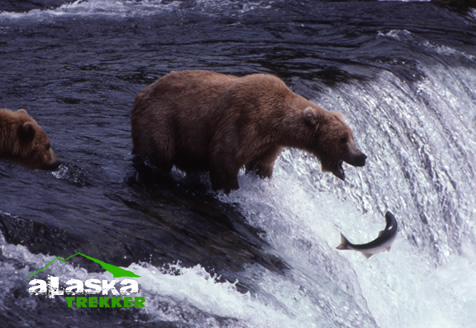 As the cold swoops in, the fattened bear waddles into a den among rocks or one it dug out among tree roots. As it falls into a deep sleep, the bear’s heart rate drops from about 40 beats a minute to as low as 8 beats a minute. All the bear’s body functions slow down.

The female brown bear enters her den pregnant with one (sometimes two or three) baby bears. If she succeeded in finding enough food to have a healthy store of fat, the embryo, or tiny developing baby bear, continues to develop and is born after a couple of months. If the mother didn’t fatten up enough, the embryo might not develop.

“Mama bear” doesn’t even wake up as her blind and hairless cub is born midwinter. The tiny bear, about the size of a chipmunk, is just strong enough to crawl into a position where it settles in to nurse. A female brown bear’s milk is very rich in fat and calories, so the cub grows quickly. By the time the adult grizzly wakes up in the spring, her baby is strong enough to follow her out of the den.

Polar bears live along shores and on sea ice in the icy cold Arctic. When sea ice forms over the ocean in cold weather, many polar bears, except pregnant females, head out onto the ice to hunt seals. Polar bears have been spotted on sea ice hundreds of miles from shore. When the warm weather causes the sea ice to melt, polar bears move back toward shore.

Polar bears primarily eat seals. Polar bears often rest silently at a seal’s breathing hole in the ice, waiting for a seal in the water to surface. Once the seal comes up, the bear will spring and sink its jagged teeth into the seal’s head.

Sometimes the polar bear stalks its prey. It may see a seal lying near its breathing hole and slowly move toward it, then charge it, biting its head or grabbing it with its massive claws. A polar bear may also hunt by swimming beneath the ice.

A solitary animal most of the year, they pair up briefly during the mating season. Cubs remain with their mother for about a year, who protects which prevents them from being killed by the adult males. Black bears swim well and often climb trees to feed on buds and fruit. They have a keen sense of smell, acute hearing, but poor eyesight. They can be seen at any hour of the day, but are most active at night. When very young, the cubs cry when afraid and hum when contented. Black bears are omnivorous; their diet consists of about 75 percent vegetable matter, 15 percent carrion, and 10 percent insects and small mammals. Their love for honey is well known, and sweet, ripe corn in autumn also attracts them. They have few enemies, but the one they fear the most is the Grizzly. Whenever their territories overlap, the latter is given a wide berth.

A Glacier bear is a sub–species of the black bear. They have been spotted all over Alaska, but most frequently in the Southeast region.