Fishing Capital of the World

The small towns of Dutch Harbor and Unalaska are near the very end of the Aleutian Island chain. This booming fishing community boasts the most productive seafood processing port in the U.S., with five large processing facilities and fishing ships from countries throughout the world. It was a pivotal military location during World War II and was bombed by the Japanese in 1942. Ulakta Head, newly designated by the U.S. Congress as a Heritage Area, (formerly known as a national park), will provide visitors with a focal point for the study of the Aleutian Campaign. 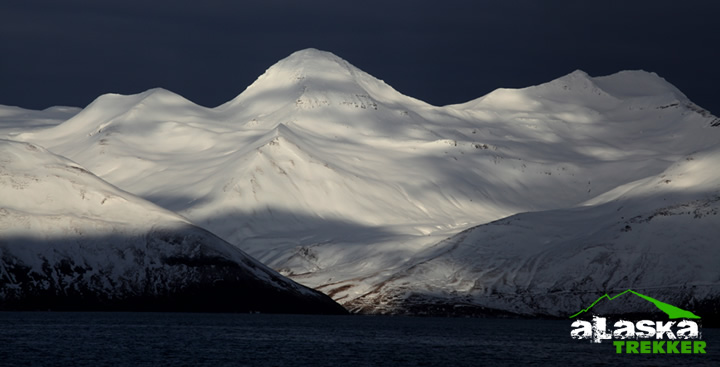 From Wikipedia: Druzhinin, the commander of the Russian ship Zakharii I Elisaveta, is credited for discovering the deep-water harbor now known as Dutch Harbor.

The native people are known as the Aleut. When the Russians arrived, they exploited the Aleut by taxing them in fur pelts. The Aleut accepted the Russian Orthodox Church because it offered them support and educated their children.

The Russian-American Company operated from 1799 through mid-1800. It used Dutch Harbor in the transport of goods, mainly seal and sea otter fur. In 1867 Russia sold Alaska to the United States. Fur was the main export in Alaska after the United States took control. Hutchinson, Kohl, & Company of San Francisco took over the assets of the Russian America Company in 1867, but it sold out in 1868 to the Alaska Commercial Company. A decline in the sea otter population slowed trade in 1895. 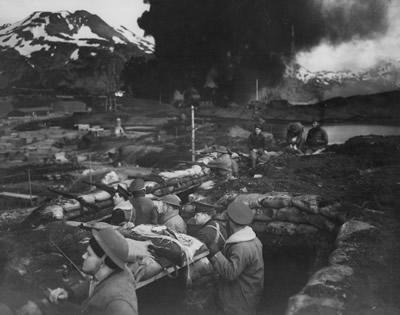 During the war, Dutch Harbor was used as a home for refugees evacuated from the Aleutian Islands. U.S. Army troops and civilian workers alike spent time at “Blackies”, the only bar in the area. This establishment had cheap beer and 50-cent shots of whiskey, but no stools or chairs as they “splintered too easily in event of a fight”. Other entertainment included a brothel named “Pleasure Island”, but this was closed in 1941 and replaced by part of the submarine base. The 500-man mess hall doubled as a theater. The tickets for military were 15 cents and 35 cents for civilian workers.

By mid-1942, a small submarine base was in place, with a squadron of old U.S. Navy S-class submarines.

In early 1942, intelligence officers of the U.S. Navy predicted that there would be a Japanese attack in the North Pacific area, and naval codebreakers warned Dutch Harbor of the impending attack. On June 3, 1942, at 5:45 a.m., 20 Japanese planes bombed the radio station and the petroleum storage tanks. By May 1943, a peak of 10,151 sailors and 9,976 soldiers were stationed at the base.

In 1947, the last units of the U.S. Navy left Dutch Harbor and the base was decommissioned. In 1952, the U.S. Army Corps of Engineers stored 232 surplus buildings on 448 acres of land of the Fort Mears Military Reservation. During the mid-1980s, the U.S. Army bulldozed and burned the old World War II barracks on Amaknak Island. The U. S. Navy scraped an air base on the rock.

Dutch Harbor is ranked as a top fishing port with more than a billion dollars transferred each year. Huge harvests of pollock and cod in the Bering Sea are part of this total. The Bering Sea has a continental shelf that is one of the world’s largest, and supports a rich ecosystem

Other historic sites include the Russian Orthodox Cathedral of the Holy Ascension and the Bishop’s House. The church, parts of which were built in 1825 is the oldest in the U.S. and is on the National Register of Historic Places. The church was rededicated in September, 1996, after phase one of a major restoration was completed. The church hosts one of the largest collections of religious artifacts and icons in the U.S.

Turrets and WW2 buildings are all over Dutch Harbor and Unalaska. You can turrets on the hillsides and trails that the soldiers used to get up to them.

Eco-tourists, bird watchers, and sportfishing enthusiasts from around the world can now enjoy the unique experience of Unalaska. Scheduled marine tours, processing plant tours, flightseeing, cultural and historic tours, and marine charter fishing are all available. Hiking difficulty spans the entire spectrum from novice to expert. Visitors should be prepared for either sunshine or windy, rainy weather by dressing in layers. Wildlife includes marine mammals, large populations of seabirds, songbirds, some migrating Asiatic species and waterfowl.

Museum of the Aleutians

The mission of the Museum of the Aleutians is to collect, preserve, and share the rich cultural legacy of the Aleutian Islands. Cool museum with artifacts for the bombing of Dutch Harbor.

The city of Unalaska is on the northern end of Unalaska Island, the second largest island in the Aleutian Chain. A 500-foot bridge connects the two islands. Unalaska is approximately 800 air miles southwest of Anchorage.

Scheduled daily air service from Anchorage ranging from small commuter planes to jet service. Ferry service is provided by the Alaska Marine Highway System, once a month, from April through October.