Alaska Has Over 40 Volcanoes

There are approximately 800 active volcanoes in the world. More than 40 of those are in Alaska. Most of Alaska’s volcanoes are along the Aleutian Arc, extending westward from central Alaska along the Alaska Peninsula and the Aleutian Islands toward eastern Russia. This is also the northern portion of the Ring of Fire, where the Pacific plate meets other plates. The plates move a lot here, causing earthquakes and volcanic activity.

One of the greatest eruptions in Alaska history was the 1912 eruption of volcanoes in what is now Katmai National Park and Preserve, on the Alaska Peninsula. The explosions lasted two days and sent about seven cubic miles of ash and pumice, or light rock full of air pockets, into the air. The wind blew the volcanic ash more than 100 miles away, to the town of Kodiak. Up to 12 inches of ash caused serious problems in Kodiak. It damaged buildings, cars and airplanes and polluted the water supply. Smaller ash falls reached Fairbanks, 500 miles away; Juneau, 750 miles away; and Puget Sound, 1,500 miles away. Volcanic material also filled a glacier-carved valley and formed what is known today as the Valley of Ten Thousand Smokes. For more than 50 years, scientists believed Mount Katmai was the source of the eruption, but they later found that almost all of the magma that erupted came from the nearby Novarupta volcano.

Scientists are keeping a close eye on three volcanoes west of Cook Inlet near Anchorage. They are Augustine, Spurr and Redoubt. 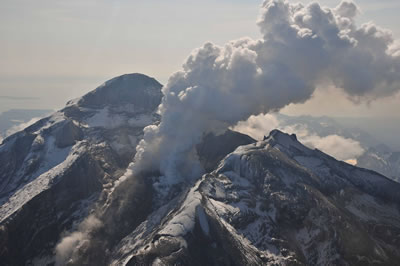 Mount Redoubt’s 1989-1990 eruption proved very damaging. Volcanic ash caused severe damage to aircraft and left some businesses and homes in Anchorage without power. The ash cloud was so thick, it turned daylight into darkness. Some schools even had to close. The explosion sent ash avalanches down a nearby glacier. The ash flows and floods from the melting glacier slowed oil production in Cook Inlet for several weeks. It was Redoubt’s fourth and most damaging eruption of this century. The volcano also erupted in 1902, 1966, and 1967-68, and 2009. Mount Redoubt erupted explosively late in the evening of March 22, 2009. Alaska Volcano Observatory has recorded numerous volcanic eruptions and/or explosions at Redoubt volcano.

The Augustine volcano has been the most active volcano in the Cook Inlet region, erupting at least twice in the 1800s and four times in the last 100 years. An eruption in 1883 sent a tsunami, a giant sea wave, hurling toward the small fishing village of English Bay. The 30-foot wave destroyed boats and buildings, but luckily no one was killed. In 1986, ash blew out of the volcano, as well as giant white clouds of steam. Ash fell over the entire Kenai Peninsula and other areas, including Anchorage. It is erupting daily now as of May 30th, 2006. The irregular coastline of Augustine Island is due to the repeated catastrophic collapse of the summit dome, forming debris avalanches down the flanks and into Cook Inlet.

Mount Spurr is a Quaternary stratovolcano located near the northeastern end of the Aleutian volcanic arc. It is the easternmost historically active volcano in the Aleutian arc and is the highest of several snow- and ice-covered peaks that appear to define a large, dissected stratovolcano. (From the Alaska Volcano Observatory) On June 27, 1992, Mount Spurr burst into eruption, shooting a mushroom cloud thousands of feet into the air. The ash cloud traveled over Cook Inlet into Anchorage, about 80 miles away. No lava came out of the volcano. It erupted again in July, August and September, blanketing Anchorage with more ash. It took several months to clean up all the ash. Before these eruptions, the volcano had been quiet for nearly 39 years. The ash caused millions of dollars of damage.

Scientists at the Alaska Volcano Observatory in Anchorage keep track of the many volcanoes in Alaska. They gather information day and night about volcanoes from seismograph machines that let them know when the earth is rumbling. Since volcanoes often make a lot of noise before they blow, scientists are able to warn us ahead of time of possible eruptions. The Alaska Volcano Observatory uses a color code to let people know how dangerous the eruption may be. Still, scientists are not 100 percent sure how powerful an eruption may be.