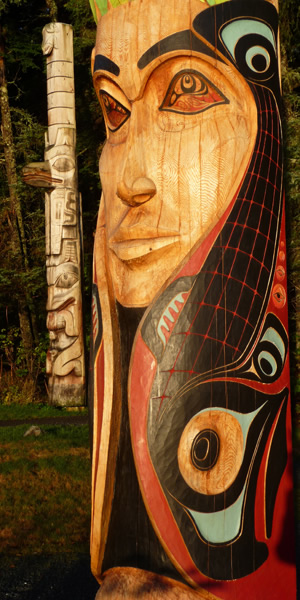 The totem pole collection visitors see along Sitka National Historical Park trails today has changed since it was first placed there in 1906. Over the years, caretakers patched, painted and finally re-carved the poles. Although many of the original poles are gone their stories live on – along with the opportunity for visitors to discover them along the quiet wooded paths of the park.

Perhaps the most remarkable thing about the Sitka National Historical Park poles is that they continue to fulfill their purpose. Just as the original donors intended, the preservation and display of these objects have provided a lasting memorial to their cultural heritage. Just as Governor Brady intended when he began his efforts to preserve and display Alaska’s totem poles more than 100 years ago, the totem poles of Sitka National Historical Park remain powerful symbols that draw people to Alaska and provide a tangible link to the past.

The stately totem poles of Sitka National Historical Park appear so solidly rooted in place it is hard to imagine a time when they were not part of the surrounding forest. Their history, however, tells a very different story– a story that begins in the coastal villages of southeast Alaska and ends, after traveling more than 6,000 miles by revenue cutter, steamship and rail, in Alaska’s first National Park.

Acquired from Russia in 1867, the vast territory some referred to as “Seward’s Folly” was actually rich with resources and far from the frozen wasteland some imagined. Alaska was long on acreage but short on population. The challenge would be how to generate interest in Alaska and attract the settlers that could help shape it into a state.

That question was on the mind of Alaska’s Governor, John Green Brady, when he was asked to create an exhibit publicizing Alaska for the Louisiana Purchase Exposition to be held in St Louis in 1904. His answer involved showcasing one of the region’s most recognizable features: the towering totem poles carved by the Native peoples of southeast Alaska. In Brady’s mind, a display of totem poles would draw people to the exhibit. Once there, they would learn about the “real” Alaska through displays of raw materials, agricultural products and unique curiosities. Brady hoped visitors would form a new impression of Alaska: that of a place ready for tourism, settlement and development.

Sitka National Historical Park is located within walking distance of the cruise ship lightering docks. See Directions for more information about getting to Sitka and around town once you’re here.

There is no park entrance fee for Sitka NHP or the first-floor museum at Russian Bishop’s House.