The indigenous peoples of Alaska, known as Alaska Natives, have varied cultures and have adapted to harsh environments for thousands of years. They are as far north as Barrow (Utqiagvik) and as far south as Ketchikan. Natives are indigenous peoples of Alaska: Iñupiat, Yupik, Aleut, Eyak, Tlingit, Haida, Tsimshian, and a number of Northern Athabaskan cultures. Ancestors of Alaska Natives are known to have migrated into the area thousands of years ago, in at least two different waves. Some are descendants of a third wave of migration in which people settled across the northern part of North America. They never migrated to southern areas. For this reason, genetic studies show they are not closely related to Native Americans in South America. Throughout the Arctic and northern areas, they established varying indigenous, complex cultures that have succeeded each other over time. Alaska Natives developed sophisticated ways to deal with the challenging climate and environment, and cultures rooted in the place. Historic groups have been defined by their languages, which belong to several major language families.

In the early spring of 1942, when the Army Corps of Engineers arrived to begin building the Alaska Highway, Alaska’s population was approximately 73,000. About half of those residents were Native Alaskans, members of indigenous groups who inhabited Alaska before it was colonized by Russia.

A third group of Native Alaskans consisted of several Indian tribes (also known as First Nations). Two of the larger groups were the Tlingit and Haida, who resided in the southeastern inland region of Alaska. While these groups were adept at fishing, they were also known for their mountaineering skills. They were famed for their totem poles and their potlatches, gatherings of friends and family to celebrate important milestones in an individual’s life, such as a first hunt or a funeral. Both of these tribes were seasonally mobile hunter gatherers with their own distinguishing features, most prominently linguistic ones. 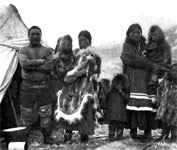 The influx of civilians and military personnel into Alaska had a devastating effect on the Native Alaskans, who had already suffered a negative impact. In the century of Russian and American colonization prior to World War II, contact with outsiders had subjected Native Alaskans to diseases for which they lacked immunity, including meningitis, influenza, chicken pox and whooping cough.

With the newcomers’ arrival, Native Alaskans’ whole way of living became endangered. Highway-building made travel and access much easier within Alaska. During their recreation time, the Army engineers would go fishing, or go hunting with their military-issued guns, for which they otherwise had little use. Along the narrow corridor of the highway, the outsiders depleted the natural resources on which the Native Alaskans depended for subsistence.

As a result of disease, cultural confusion and the growing number of whites, the percentage of Native Alaskans in the general Alaskan population plummeted from 45 percent in 1940 to 26 percent in 1950 to 19 percent at the time of statehood in 1959. The highway construction led to a new era for the original Alaskans.

Historian Ken Coates described the effect of the Alaska Highway on the area’s native population: “Construction projects transformed aboriginal life in the northwest very quickly and very profoundly. There was only occasional work to be found, they didn’t hire very many aboriginal people to work. The women got involved selling handicrafts and doing some domestic work… There were a lot of attacks on aboriginal people, some rapes of native women, for example. A lot of misuse of alcohol with aboriginal people. So, a world had ended. A lifestyle that had been in place in many ways for centuries, but certainly since the arrival of the fur traders in the middle of the 19th century. It’s a hundred years of fishing, and trapping, and sort of casual engagement with the market economy, poof, gone. Overnight.”

Gathering of subsistence foodstuffs continues to be an important economic and cultural activity for many Alaska Natives. In Barrow, Alaska in 2005, more than 91 percent of the Iñupiat households which were interviewed still participated in the local subsistence economy, compared with the approximately 33 percent of non-Iñupiat households who used wild resources obtained from hunting, fishing, or gathering.

But, unlike many tribes in the contiguous United States, Alaska Natives do not have treaties with the United States that protect their subsistence rights, except for the right to harvest whales and other marine mammals. The Alaska Natives Claims Settlement Act explicitly extinguished aboriginal hunting and fishing rights in the state of Alaska.

Today, Alaska Natives account for just over 15 percent of the total Alaskan population of approximately 648,000 people. Since the 1960s and 1970s, aboriginal autonomy has rebounded in Alaska. The Alaska Native Claims Settlement Act of 1971 officially ended native land ownership claims while creating regional corporations that administered approximately one-ninth of Alaskan territory; the shareholders of the corporations are the native peoples. The legal battles for rights to their ancestral land began a revitalization of native society that is evident today.

If you visit Anchorage, make sure to visit the Alaska Native Heritage Center while you are there.

The Aleuts, who call themselves Unangan, lived in the Aleutian Islands off the coast of mainland Alaska. St. Paul Island, Alaska. Some anthropologists believe their ancestors migrated to the Aleutians 7,000 years ago. Aleuts had both permanent and seasonal homes. Permanent Aleutian villages consisted of underground homes mainly located on the northern coasts of the islands that faced the Bering Sea, due to the abundance of resources on that side. Aleutian culture is based heavily on the sea. They are famous fishers and hunters, and are known for their basketry.

The Aleuts lived on ice-free waters, but the Inuit (who are also known as the Eskimo) were surrounded by the icy northern seas of Western Alaska. As a result, the Inuit were more mobile that the Aleuts. One distinguishing feature of the Inuit Eskimo, family, in Alaska was their near total dependence on the sea. Their food, clothing, furnishing for their homes, and fuel all came from the marine life that they hunted, such as whales and seals. Their homeland stretches from the northeastern tip of Russia across Alaska and northern Canada to parts of Greenland. Inuit refers to the people formerly called Eskimos. The term Eskimo comes from a Native American word that may have meant ‘eater of raw meat’. They prefer the name Inuit, which means ‘the people’ or ‘real people’ and comes from a language called Inuit-Inupiaq. 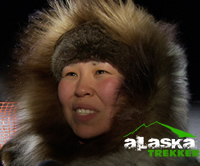 As the Inuit spread eastward, they modified their way of life to suit the Arctic environments they encountered. They caught fish and hunted seals, walruses and whales. On land, they hunted caribou, musk oxen, polar bear and other small animals. They used animal skins to make tents and clothes. They crafted tools and weapons from the animals’ bones, antlers, horns and teeth. In summer, they traveled in boats covered with animal skin, called kayaks and in winter, on sleds pulled by dogteams. Most Inuit lived in tents in the summer and in large sod houses during the winter. When traveling in search of game in winter, they built snowhouses (igloos).

The Inupiat have inhabited the harsh arctic environment for more than 10,000 years. The ancestral Inupiat crossed the Bering Land Bridge from Siberia. Some of the early migrants continued their journeys to the east and south. Those who remained in the region gradually established camps, small villages and trading routes. They are skilled hunters and gatherers an subsist on whale, fish,
caribou and moose. Their diet is supplemented with berry and root plants native to the region.

The Aleuts are the native inhabitants of the present Aleutian islands stretching for about a thousand miles southwestward from the Alaskan mainland. Primarily a sea-going people, the Aleuts were adept at harvesting resources of the sea (sea lion, seals, whales, and fish) in their skin-covered boats as well as those of the land (birds, eggs, and plants).

The Yup’ik people live mainly in the coastal watersheds of the Yukon and the Kuskokwim Rivers both of which flow westward through Southwest Alaska and drain into the Bering Sea.

Having continuously inhabited the land for several thousand years, Athapaskan society exemplifies how humans can maintain a sustainable coexistence with their environment. Subsisting on the rich natural resources provided by the northern boreal forest, they have developed a deep respect for both the land and its animals.

The origin of the Tlingit people is not certain. It is possible the people came from the coast of Asia and Japan migrating north and east across the Aleutians and Gulf of Alaska into Southeast Alaska. Art forms and physical features of the Tlingit are similar to some Pacific groups.

Southeast Alaska provided an idyllic setting for the villages and contained abundant local resources. The forests supplied shelter, game and wild berries while the ocean was a storehouse of fish and sea mammals. In contrast to the Arctic peoples of Alaska, the Tlingits spent relatively little time surviving and were able to become traders and craftsmen. 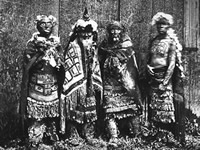 The original homeland of the Haida people is the Queen Charlotte Islands in British Columbia, Canada. Prior to contact with Europeans, a group migrated north to the Prince of Wales Island area within Alaska. This group is known as the “Kaigani” or Alaska Haidas. Today, the Kaigani Haida live mainly in two villages, Kasaan and the consolidated village of Hydaburg. Before the Haida came in contact with Europeans, most Haida wore clothes made of woven red or yellow cedar bark. Women wore skirts and capes and men wore long capes. The Haida’s main food sources were the salmon and eulachon fish. The eulachon was highly prized because, besides being good to eat, its oil could be used for lighting lamps. 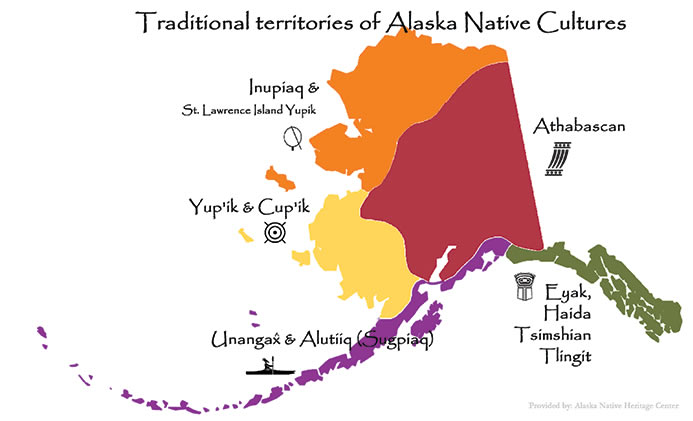