Ducks are everywhere in Alaska

Duck is the common name for a number of species in the Anatidae family of birds. The ducks are divided between several subfamilies listed in full in the Anatidae article. Ducks are mostly aquatic birds, mostly smaller than their relatives the swans and geese, and may be found in both fresh water and sea water. Most ducks have a wide flat beak adapted for dredging. They exploit a variety of food sources such as grasses, aquatic plants, fish, insects, small amphibians, worms, and small molluscs. Diving ducks and sea ducks forage deep underwater; Dabbling ducks feed on the surface of water or on land. Dabbling ducks have in their beaks special plates called lamellae similar to a whale’s baleen. These tiny rows of plates along the inside of the beak let them filter water out of the side of their beaks and keep food inside. To be able to submerge more easily, the diving ducks are heavier than dabbling ducks, and therefore have more difficulty taking off to fly. A few specialized species such as the Smew, Goosander, and the mergansers are adapted to catch large fish.

The males (drakes) of northern species often have extravagant plumage, but that is moulted in summer to give a more female-like appearance, the “eclipse” plumage. Southern resident species typically show less sexual dimorphism. Many species of ducks are temporarily flightless while moulting; they seek out protected habitat with good food supplies during this period. This moult typically precedes migration.

Some duck species, mainly those breeding in the temperate and Arctic Northern Hemisphere, are migratory, but others, particularly in the tropics, are not. Some ducks, particularly in Australia where rainfall is patchy and erratic, are nomadic, seeking out the temporary lakes and pools that form after localized heavy rain.

Find out more Alaska duck information from the Alaska Fish and Game website. 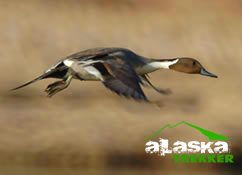 The Pintail or Northern Pintail (Anas acuta) is a common and widespread duck which breeds in the northern areas of Europe and Asia and across most of Canada, Alaska and the mid-western United States.

The breeding male is unmistakable. It has a pale grey body, white breast and lateral neck stripe, and dark brown head. The vent region is buff and black, and it has the long pointed tail that gives the species its English and scientific names. The females are light brown with a whiter throat, and their pointed tail is shorter, but they are easily identified by their shape, long neck, and long all grey bill. In non-breeding (eclipse) plumage, the drake Pintail looks more like the female. The species is fairly large for a duck, but is light for its size; males range from 65 to 75 cm in length, while females are smaller at 50 to 55 cm.

Spring Birds of Alaska from Dennis Zaki on Vimeo.

The Lesser Scaup (Aythya affinis) is a small diving duck. Adults are 38-45 cm long, with a blue bill and yellow eyes. Adult males have a dark head with a purple sheen, a black breast, a light grey back, a black tail and white underparts. Adult females have a white band at the base of the bill and a brown head and body. They are smaller than the Greater Scaup. 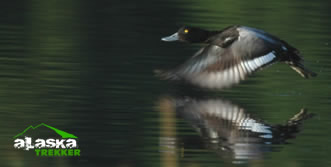 Their breeding habitat is marsh ponds in Alaska and western Canada. They nest in a sheltered location on the ground near water.

There can be difficulties for inexperienced birdwatchers in distinguishing the Greater and Lesser Scaup. The differently colored sheen on the head is unreliable because light conditions vary, and these birds are often far from the shoreline.

The Lesser Scaup is best identified on its much smaller size, different head shape with a peaked hind crown, and a white wing bar that is visible only on the secondaries (it extends onto the primaries in Greater). The drake also shows vermiculations on the back. In North America, a large scaup flock will often have both species present.

Lesser Scaup migrate in flocks and winter in lakes, rivers and sheltered coastal waters along the west coast of North America, the southern United States and northern South America. They are more likely to be found on freshwater than Greater Scaup. These birds move south late in the fall and return in early spring. 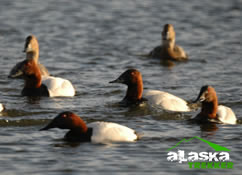 The canvasback is a diving duck that is found only in North America. It is 13-19 inches in length with a wingspan of 34 inches. The male has a grayish-white body, a black chest and tail, a copper colored head and neck and red eyes. The female has a speckled gray body with a brown head and neck and brown eyes. The canvasback has a long sloping forehead and a long pointed black bill.

Canvasbacks feed mainly by diving, sometimes dabbling, mostly eating aquatic plants with some molluscs, aquatic insects and small fish. Wild celery, Valisneria americana, is a favourite food and is the origin of this bird’s species name. The canvasback sometimes lays eggs in other canvasback nests.

The American Wigeon (also American Widgeon or Baldpate), Anas americana, is a common and widespread duck which breeds in northwestern North America. It is the New World counterpart of the Eurasian Wigeon.

This duck is migratory and winters farther south than its breeding range, in Texas, Louisiana, and other areas of the Gulf Coast. It is a rare but regular vagrant to western Europe. It is highly gregarious outside of the breeding season and will form large flocks.

The breeding male has pinkish flanks and breast back, with a black rear end and a brilliant white speculum, obvious in flight or at rest. It has a greyish head with a green eye patch and a whitish crown stripe. It is 18-23 inches long.

The females are light brown, with plumage much like a female Mallard. They can be distinguished from most ducks, apart from Eurasian Wigeon by shape. However, that species has a darker head and all grey underwing.

The King Eider (Somateria spectabilis) is a large sea duck, which breeds along northern hemisphere arctic coasts of northeast Europe, North America and Asia. The lined nest is built on tundra close to the sea, and 4-6 eggs are laid. 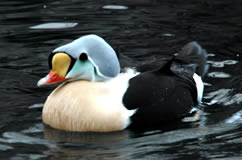 It winters somewhat further south in winter to eastern Canada and Norway, where it can form large flocks on suitable coastal waters, and it is annual off the northeastern USA, Scotland and Kamchatka. This species dives for crustaceans and molluscs, with mussels being a favoured food.

This species is smaller than Common Eider. The male is unmistakable with its black body, white breast and multicoloured head. The drake’s call is a deep cooing.

The female is a brown bird, but can still be readily distinguished from all ducks except other eider species on size and structure. The head is shorter than in Common Eider, and the feathering extension onto the bill is rounded, not triangular in shape.

The Common Eider, Somateria mollissima, is a large (50-71cm body length) sea-duck, which is distributed over the northern coasts of Europe, North America and eastern Siberia. It breeds in Arctic and some northern temperate regions, but winters somewhat farther south in temperate zones, when it can form large flocks on coastal waters. 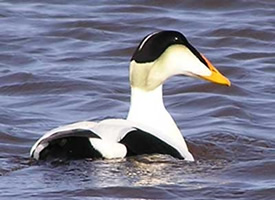 The eider’s nest is built close to the sea and is lined with the celebrated eiderdown, plucked from the female’s breast. This soft and warm lining has long been harvested for filling pillows and quilts, but in more recent years has been largely replaced by down from domestic farm-geese and synthetic alternatives. Although true Eiderdown pillows or quilts are now a rarity, eiderdown harvesting continues and is sustainable, as it can be done after the ducklings leave the nest with no harm to the birds.

The Greater Scaup (Aythya marila), or just Scaup in Europe, is a small diving duck. It breeds on the ground by lakes and bogs on the tundra and at the northern limits of the boreal forest across Arctic and subarctic regions of northern North America, Europe and Asia. 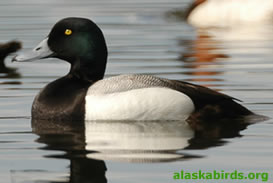 Nearctic Greater Scaup are separable from Palaearctic birds by stronger vermiculation on the mantle and scapulars, and are considered a separate subspecies, A. m. nearctica. Greater Scaup migrate southwards to winter in flocks to coastal waters. The Greater Scaup mainly eat mollusks and aquatic plants, obtained by diving and swimmming underwater. There is a report of it eating leopard frogs in a fresh water environment.