A place you must visit at least once in your lifetime

The Denali National Park is the most visited area in all of Alaska. Wildlife abounds as it is one of the world’s last great frontiers, its wilderness is largely unspoiled. Denali, the “High One,” is the name Athabascan native people gave the massive peak that crowns the 600-mile-long Alaska Range. Denali is also the name of an immense national park and preserve created from the former Mount McKinley National Park. In 1917 Mount McKinley National Park was established as a game refuge. The park and the massif including North America’s highest peak were named for former senator – later President – William McKinley. In 1980, the Alaska National Interest Lands Conservation Act (ANILCA) enlarged the boundary by 4 million acres and re-designated it as Denali National Park and Preserve.

More than 650 species of flowering plants as well as many species of mosses, lichens, fungi, algae, and others grace the slopes and valleys of Denali National Park. Only plants adapted to long, cold winters and short growing seasons can survive in this subarctic wilderness. Permafrost ground underlies many areas of the park, where only a thin layer of topsoil is available to support life. After the continental glaciers retreated from most of the park 10,000 to 14,000 years ago, hundreds of years were required to begin building new soils and re-vegetation. The dynamic glaciated landscape provides large rivers, countless lakes and ponds, and unique landforms which form the foundation of the ecosystems that thrive in Denali National Park.

Day hiking in Denali National Park can include anything from a leisurely stroll along a river bar to an adventurous hike to the top of a mountain. Denali for the most part is a trail less wilderness. You will find short trails at the entrance of the park, and near Polychrome Overlook, Eielson Visitor Center, and Wonder Lake.

You may join a ranger for a guided walk or educational talk. National Park Rangers and Naturalists offer visitors a variety of programs. You can learn about anything from grizzlies to glaciers during informal 30 to 45 minute programs. Topics are listed on bulletin boards throughout the park.

Today the Denali Highway is an often overlooked treasure taking the traveler back to Alaska’s rich prehistoric past, it’s colorful gold rush history and the awesome wilderness that remains throughout much of the state. No longer the primary route to Denali National Park, the highway is lightly traveled on the 133 miles between Paxson and Cantwell. Gravel after the first 21 miles, the road is best enjoyed at a leisurely pace, either behind the wheel or atop a bicycle. Travelers should plan for plenty of sidetrips? to explore archaeological sites, paddle wild rivers or hike the alpine tundra. 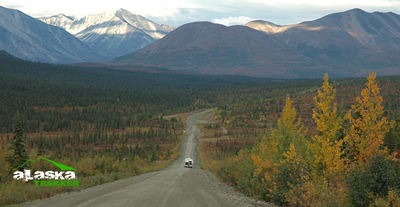 The Alaska Range follows a broad arc for 650 miles, from Cook Inlet on Alaska’s west coast through the Denali massif and onward to the Canadian border. The Denali Highway passes through alpine tundra, paralleling this band of mountains to the south. Peaks like Mt. Hayes at 13,832′, Hess at 11,940′, and Mt. Deborah at 12,339′ dominate the skyline.

To the southeast, the Wrangell Mountains rise even higher. Although almost 80 miles away, Mt. Sanford at 16,237′ rises prominently, flanked by Mt Drum and Mt. Wrangell. As the northernmost active volcano on the Pacific Rim, Wrangell may at any time be venting steam into the Arctic air.

Denali National Park land constantly reveals the work of glaciers that carved it over the millennia. The Gulkana and Gakona glaciers are visible just out of Paxson, remainders of ice floes that gouged the many U-shaped valleys appearing along the ride. Mid-way along, kettle lakes have formed. These small circular ponds developed when ice chunks broke from retreating glaciers and were buried in sediment. As the ice melted, the land sank into bowl-shaped depressions. Farther along, the road travels on outstanding examples of eskers, ridges of silt, sand and gravel that were deposited by streams flowing within a glacier.

At the height of the summer, wildflowers dot the open tundra. Evergreens cling low to the ground. Black spruce and dwarf willow are stunted from the extreme winter cold and short growing season.

The BLM, which administers the highway, recommends several spots for wildlife watching. Mud Lake just out of Paxson is a clear shallow lake frequented by trumpeter swans, bald eagles, and moose. Sockeye salmon can be seen in the waters. Fiftymile Lake is another good place for spotting swans, eagles and moose, along with grizzly, caribou and beaver. Caribou migrate through an area west of the Susitna River.

The Tangle Lakes are prime bird-watching habitat. Red-necked Phalaropes can be seen sucking insects from the lake bottom, along with swans, wigeons and pintails.

The National Park Service has a great page on this section.

The spring “shoulder” season in any year is dictated by weather. Road plowing will begin sometime in March, ideally offering access by private vehicle into the park by mid April. Contact us in late winter to learn more or follow our spring road opening updates.

Summer is the main visiting season. Summer bus service begins May 20 each year, although the entire road is not accessible by bus until June 8. Shuttle buses operate through the second Thursday after Labor Day each year. Thus, shuttle bus service ends:
September 17, 2015
September 15, 2016, etc.

Most summer visitor services and activities are available between late May and early September. During this time, the park’s main visitor center is open daily, 8 am – 6 pm.

The annual Denali National Park Road Lottery event always occurs after shuttle buses conclude. Reference the above shuttle season end dates to calculate lottery dates for the next few years. Applications to the lottery are accepted in the month of June each year, for that season’s lottery.

The fall season, when all private vehicles may drive up to 30 miles into Denali National Park – weather permitting – begins after the Denali Road Lottery each year. The fall driving season will last until snow closes the road. It is always a good idea to contact us in fall to get an update on conditions before traveling to the park.

Once significant snow falls, the road may frequently close at Mile 3, Park Headquarters. The first snow may fall in July or August, but true winter doesn’t set in until September or October. At that point, winter activities become possible, like skiing or dog mushing. The winter visitor center is open daily (except Thanksgiving, Christmas, and New Year’s Day) from 9 am – 4:30 pm.

In continuation of a multi-year test period, the park will again start plowing the Denali Park Road as far as Mile 12.7, the Mountain Vista Rest Area, starting in February 2015. This is a beautiful spot, with views of Mount McKinley during clear weather; but beware that rapid changes in weather can result in temporary closures at Park Headquarters.

Deciding When to Visit:

Denali National Park is a land of extremes. Winters can be harsh, though starkly beautiful. Summers are short, packed full of intense activity for animals and humans alike. Spring is so brief that a matter of days can be the difference between hillsides looking drab and brown versus verdant and green. Fall is equally brief, with tundra plants changing from green to brilliant reds and oranges, and then fading back to brown a week later.

Whether you plan to visit in summer, winter or the “shoulder seasons” between the two, there are many adventures to be had here.

For a visitor to Denali National Park, the summer is when most services and activities are possible, and is when access into the park is easiest. The “core” season runs June 8 – mid-September each year, with some bus options available both before and after those dates. Mid-June to mid-August also sees the largest number of visitors to the park. Look a few paragraphs above for the precise end dates in September for shuttle bus service.

Expect the land to turn from brown to green in just a few days, at the end of May or beginning of June – depending on how mild the weather is. Wildflowers begin to bloom in early June, and can be seen until late July. Most flowers have gone to seed by early August, making way for a variety of berries and fall colors. By early August, tundra plants at high elevation will change color first; brilliant reds, oranges and yellows march downhill into the valleys, where trees change color in turn by early September. By then, the mountains will be brown again, if not blanketed in fresh white snow.

Animals are at their most active and visible from May to September, as they squeeze in as much living (and eating) as they can before the onset of another cold winter. Mosquitoes, too, are active in early summer, although by early August they have disappeared from all but the wettest parts of Denali National Park, like Wonder Lake. 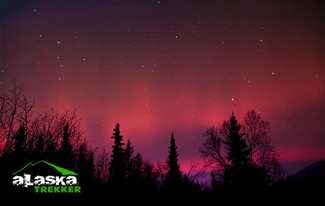 The days are also at their longest in summer, with the solstice in late June offering over 20 hours of daylight. The summer sun provides so much light, the Aurora Borealis is unlikely to be seen until late August. As daylight hours rapidly decrease in the fall, however, chances of seeing the Northern Lights increase.

While snow can fall even in summer, snow that arrives in September tends to stay rather than melt away. Winter announces its arrival not just with snow, but with extreme temperatures and ever-less sunlight. Access into the park and services offered are limited between late September and late April, though self-sufficient folks will find plenty to do in winter. Temperatures can be well below 0 F by November, and on the winter solstice – just before Christmas – Denali receives less than 5 hours of true daylight.

Fly AK Air has flown us all over Alaska throughout the years.

Primarily from the Parks Highway and the Alaska Railroad.