In 1784 Grigory Ivanovich Shelikhov founded a Russian settlement on Kodiak Island at Three Saints Bay, near the present-day village of Old Harbor. As a means of restricting the British fur trade and to continue in the sea otter hunting industry. In 1793, the Russians decided to move the capital of their colony from Three Saints Bay to the northern part of Kodiak. They established a new center of government, which they named Pavlov Harbor (“Paul Harbor”), at the site of today’s city of Kodiak. Pavlov Harbor’s central position in the colonial empire lasted until 1808. A contingent of Russian Orthodox clergy arrived in Kodiak in 1794 to convert Alaskan Natives to Christianity. The most lasting legacy of the Russian era is the Russian Orthodox religion.

The Russians sold Alaska to the United States in 1867. Soon after the sale, a number of American entrepreneurs arrived to continue sea otter hunting until the near demise of this animal led to a ban on hunting it in 1911. The Americans attempted various other industries, including trapping, whaling, cattle ranching, and gold mining. A number of tiny islands around the Kodiak Archipelago and off the Alaska Peninsula were deemed suitable for fox farming. The farms were largely owned by trading companies which hired Native men to hunt and fish to provide food for the foxes. The salmon fishing industry, which had both high risks and high profits, enjoyed the most dramatic and lasting success of the new commercial efforts.

The residents of the Alaska Peninsula and Kodiak were disrupted by the volcanic eruption of Mount Katmai in June 1912. The volcano covered Kodiak with eighteen inches of ash, clogged salmon streams and killed vegetation. Commercial salmon fishing was halted that year. In subsequent years, however, the ash served as fertilizer for bumper-crop gardens. Halibut fishermen from the Northwest Coast, many of them Norwegian immigrants, began stopping in Kodiak in the early twentieth century. By the 1920s, herring and cod boats also fished in Kodiak waters. In 1938 and 1939, the U. S. Congress allocated funds for the construction of a Navy base at Kodiak. During World War II, the military presence increased dramatically. Kodiak became a base for as many as 15,000 servicemen. After the war, the Navy base remained in Kodiak and later became a Coast Guard base. In the postwar years, salmon continued to be the major fishery. Both Native and white fishermen began to concentrate more on purse seining than other gear types.

Spruce forests dominate the northern part of Kodiak Island and all of the Afognak Island portion of the refuge. he interior of the refuge is covered with lush, dense vegetation. Southwestern Kodiak is covered with hummocks (knolls) of grass. No place on the 100 X 40 mile island is more than 15 miles from the sea.

Kodiak was established in 1941 to protect the habitat of the brown bear. Besides the brown bear there are only five other native land mammals on Kodiak: red fox, river otter, short-tailed weasel, little brown bat, and tundra vole. Black-tailed deer, beaver and several other species of mammals have been successfully introduced to the island. Bald eagles reside year-round on the refuge in such numbers they are in view continuously. An estimated two million seabirds inhabit the bays, inlets, and shores.

Remnants of a WWII military installation, foot trails leading to a rugged coastline, and a lake stocked with rainbow trout and grayling, are but a few of the attractions at this seaside park. The campsites at Ft. Abercrombie are designed primarily for tent campers. R.V. campers are encouraged to use the overflow parking area. A group recreation site with covered picnic area is available with a prepaid reservation.

The Kodiak area has an abundance of places to fish. You can fish from land or a boat in Kodiak. This region of Alaska is particularly noted for its strong runs of Halibut. 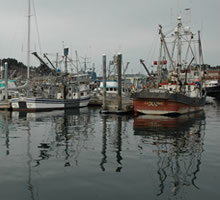