Many weather-related myths surround Alaska’s temperatures and climate. One of the most common is that Alaska temperatures in summer are cool. In fact, like much of the United States, Alaska has four seasons and weather records at both ends of the thermometer. Alaska’s summers are warm with temperatures that can reach into the 90°s. Ft. Yukon holds the all-time record with a sizzling 100°F temperature recorded in 1915. Many believe that the far northern part of Alaska would be the coldest. Actually, the record for Alaska (and the entire U.S. for that matter) was set in 1971 at Prospect Creek in the northern interior: a bone-chilling -80°F! When compared to high readings near 90°, Alaska temperatures range is an astonishing 170°.

The annual average temperature in Alaska has increased 3.5°F from 1949 to 2005. Temperatures have changed more in Alaska over the past 30 years than they have anywhere else on Earth: winters have warmed by a startling 5-6°F, compared with a global average of 1°F. That’s guaranteed to have dramatic effects in an Arctic landscape, where even small temperature changes can make the difference between freezing and melting. In Fairbanks, a city built on permafrost, the annual mean temperature is just 28°F. If it pops above zero, residents can say goodbye to the frozen ground beneath their feet, along with the free iceboxes in their basements. The impacts on wildlife, and the people who depend on it for their livelihoods, will be huge.

Alaska’s climate is determined by average temperatures and precipitation received statewide over many years. The extratropical storm track runs along the Aleutian Island chain, across the Alaska Peninsula, and along the coastal area of the Gulf of Alaska which exposes these parts of the state to a large majority of the storms crossing the North Pacific. The climate in Juneau and the southeast panhandle is a mid-latitude oceanic climate in the southern sections and a sub Arctic oceanic climate in the northern parts.

Due to the Pacific Ocean, the climate of this zone is distinctly maritime. This means that temperatures are relatively mild, and daily variations between the high and low readings are small, with the range between 8 to 16 degrees. Periods of subfreezing temperatures seldom extend beyond ten days duration, and minimum readings of zero to -20°F are a rare occurrence. Conversely, extremely high temperatures occur infrequently during the summer months. Temperatures reach the 80°F to 85°F range nearly every year, chiefly in June, July, and August. Yet, it is not unusual for daily maximum readings to remain in the 50s during the summer months.

In Juneau, the state capitol, extremes include a maximum of 89°F in July to a minimum of -22°F in February. This zone is located almost directly in the path of easterly moving storms that cross the Gulf of Alaska. Frequent and relatively heavy precipitation occurs, with annual amounts close to that of the immediate coastal regions of Washington and Oregon. Due to a rugged topography, precipitation amounts vary greatly in different localities, even in adjacent localities. Yakutat has an annual precipitation of around 130 inches, one of the highest in the state. June has the least precipitation of any month, while October and November are usually the wettest months. Most of the precipitation, even in the winter months, occurs in the form of rain. Some snow, mixed with rain, may fall as early as October. Snow has fallen in all months of the year except June, July, and August. However, appreciable snowfalls seldom occur after late March or before late November. Accumulated snow depths of a foot or more are infrequent and, because of moderating temperatures, snow covers seldom persist beyond a week or two. Strong southeasterly winds are frequent from October through March. Thick fogs are infrequent and of short duration. 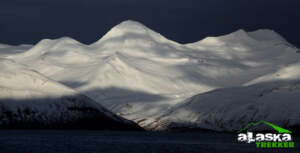 This zone has a climate rather similar to that of the Southeast Coast, except that precipitation, though frequent, is not as abundant. Due to the moderating effects of the ocean, it is difficult to define any seasonal periods. The beginning of spring is in late May or early June. August is regarded as the midsummer period and autumn arrives in early October. Fog occurs frequently in the summer season, with the foggy period extending from mid-July to mid-September. During the winter months, visibility is often restricted due to blowing snow.

The climate in the western and southern sections of this zone is more maritime than continental in character, and that modifies the daily temperature extremes. Northern and eastern sections are predominantly continental. However, there are usually two periods during the year when the entire zone is affected by the continental climate. In June and July, temperatures rise noticeably under the influence of warmer continental air, and around late December and early January, the cold, clear continental air becomes quite dominant. Another aspect of this zone is its highly varied terrain, which exerts pronounced effects on local weather and climate. This is especially true for a place like Anchorage, where large temperature and precipitation variations can occur over relatively short distances. The four seasons are well marked.

In the summer, high temperatures average in the 60s and low temperatures in the 50s. Temperatures in the 70s are considered very warm; seldom do high temperatures ever reach the lower or middle 80s. Rain increases after mid-June. Most days in July and August are cloudy and at least one third of them have rain. August through October is the wettest time of the year for most sections. Autumn is brief, beginning in early September and ending in mid-October. Temperatures begin to fall in September, with snow becoming more frequent in October. The average date of the last snow is mid-April, but may be as late as early May. Temperatures steadily decrease into January, when the highs are near 20°F and the lows near 5°F. The coldest weather is normally in January, when very cold days have high temperatures below zero. Average temperatures throughout the entire winter, however, are considerably higher than those experienced in the Alaskan interior (North Central zone). Mild days with temperatures in the 30s do occur. Annual snowfalls vary from about 60 to 90 inches. Freezing rain is extremely rare. Heavy fogs are infrequent and of short duration, but patchy ground fog is common during the spring and fall. In general, ice fog does not occur. Spring begins in late April and early May, when days are warm and sunny, nights are cool, and precipitation amounts are exceedingly small. Foliage turns green in most sections by late May/early June. For most sections, the average occurrence of the last freeze in spring is during the second half of May, while the first in fall is during the first half of September.

Temperatures usually remain below the freezing point for most of the year, with daily maximums reaching higher than 32°F an average of 110 days per year. Freezing temperatures have been observed every month of the year. February is generally the coldest month. March temperatures are warmer than those observed in the other winter months, and in April, temperatures begin a general upward trend. May is a definite transitional period, and July is the warmest month of the year. During late July or early August, the Arctic Ocean usually becomes ice-free for the summer. High readings of 70°F or above have occurred on rare occasions.

The end of the short summer is reached in September. By November, about half of the daily mean temperatures are either zero or below. Thanks to a modifying effect of the ocean, the long Arctic night temperatures of the immediate coastal areas do not drop to the extreme low readings reached in the Alaskan interior. Snow covers the ground about eight months of the year, and usually falls every month of the year.For Barrow – the most northerly first-order station operated by the National Weather Service-every year the sun dips below the horizon at 12:50 p.m. on November 18, and is not seen again until 11:51 a.m. on January 24. From the 24th on, the amount of daylight increases by more than 9 minutes per day. By 1:06 a.m. on May 10, daylight has increased to 24 hours per day. The sun remains visible from that time until August 2, when it begins to set again for 1 hour and 25 minutes. The decrease in hours of daylight is as rapid as the increase. For all other areas in this zone, the sun remains below the horizon from late November until mid-January, and continuous daylight runs from the middle of May through the end of July.