How to get to Alaska

Most trips to Alaska involve flying. The other visitors come by water – cruise lines and state ferries – or by highway. Alaska, at the northern edge of the Pacific Ocean, is a crossroads of the world for air travelers. Nonstop domestic flights arrive in the summer from a list of cities that includes Atlanta, Dallas/Fort Worth, Denver, Minneapolis, Portland, Salt Lake City, San Francisco and Seattle. It’s around $150 one way for a flight from Seattle to Anchorage during the summer. Alaska Airlines has a virtual monopoly inside Alaska and rip us off every chance they get. The exceptions are to and from Anchorage and Fairbanks where Frontier, American, Continental, Delta, Northwest and United Airlines have moved in to compete. Alaska (except for the distant reaches of the Aleutians Islands) is in the Alaska time zone. 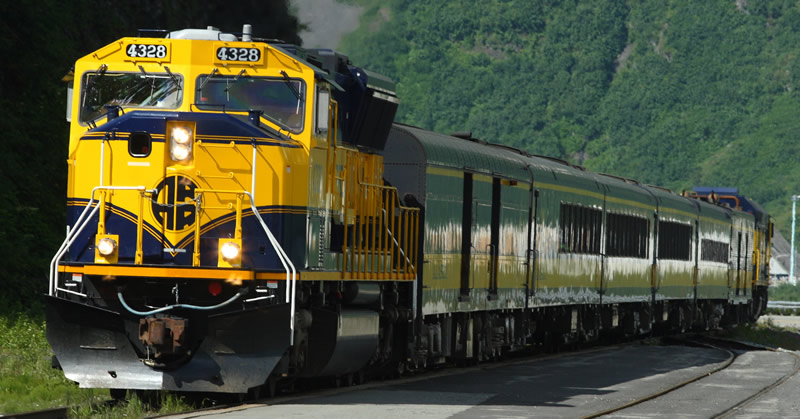 The Alaska ferries carry many passengers — with or without vehicles — between many cities and villages on the Gulf of Alaska and Inside Passage. The ferry system, known officially as the Alaska Marine Highway System, also connects year-round with Prince Rupert, British Columbia, and Bellingham, Wash., an hour’s drive north of Seattle. A common journey has passengers boarding in Bellingham and going as far as Haines or Skagway, where they drive off the ferry and onto highways that connect with the Alaska Highway.
See our Alaska Marine Highway page.

The Alaska Highway was built in 1942 to give the military a direct, safe land route to bases in Alaska. The highway, once a muddy route famous for its difficulties, is now a two-lane paved road famous for its scenery and reliability. 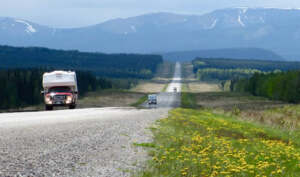 The highway’s southern terminus is at Dawson Creek, in northern British Columbia, and the highway officially ends at Delta Junction, Alaska. From Dawson Creek it’s 1,700 miles to Fairbanks or 1,900 to Anchorage. Services, ranging from fuel stations to restaurants and hotels, are available the length of the highway. Dawson Creek is accessible by highways leading up from Montana and Washington.
See our Alaska Highway (ALCAN) page.

Almost a dozen cruise lines serve Alaska waters. Most cruise passengers see the Inside Passage — the route along the islands stretching north from British Columbia past Ketchikan and Juneau and on to Haines and Skagway. Cruise liners commonly call at Glacier Bay National Park and Sitka as well.
See our Alaska Cruises page. 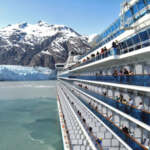 Week long cruises may be either round trip or one way. The round-trip cruises start and end in such ports as Vancouver or Seattle. The one-way trips start at a southern port and usually end in Southcentral Alaska at either Seward or Whittier, near Anchorage (or they make that trip in reverse). Passengers may extend their vacation by arranging rail or car trips before or after their cruise.

Alaska and Canada have yet to develop an international rail connection, except for an excursion train based in Skagway. Rail fans, however, can take the Canadian rail system to Prince Rupert, British Columbia, and there board an Alaska-bound ferry. The Alaska Railroad provides passenger service from Anchorage south to the cruise port of Seward and north to Denali National Park and Fairbanks. The White Pass and Yukon Route railroad runs from Skagway along an old Klondike gold rush route, with day trips reaching as far as Bennett Lake, British Columbia.
See our Alaska Railroad page.

Three bus lines serve Alaska from the Lower 48 and Canada in a round about way. In my personal opinion I would rather use any other way to get here. Slow and sleeping next to unwashed travelers for 10 days or more is not appealing to most. And it isn’t cheaper than flying!

Alaska Direct Bus Lines (though not exactly direct) meets up with buses from Greyhound in Whitehorse, Canada.

How to get here maps: 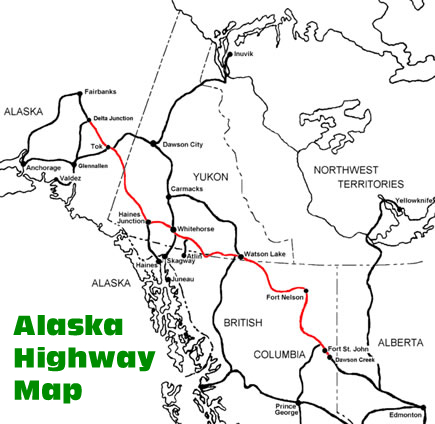 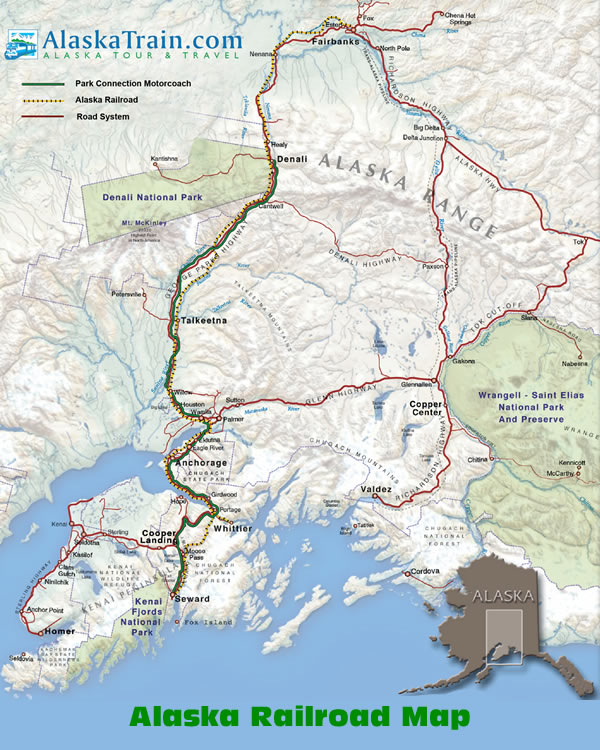