Alaska Trees and Descriptions (A few of them)

The trees of Alaska span a vast array of ecosystems from open, wind-swept tundra bordering the Artic Ocean, and Bering Sea through expansive boreal forests of the Interior to impressive temperate rain forests along the Pacific Coast. Tree composition changes with the prevailing climate across the state. In the Interior, principal species include white spruce, birch, and quaking aspen on uplands, black spruce and tamarack in forested wetlands, and balsam poplar within floodplains. Willows are abundant in the Interior as well, however most do not reach tree size. The coastal temperate rain forests of southcentral and southeastern Alaska are comprised mainly of western hemlock, and Sitka spruce. Mountain hemlock, Alaska yellow-cedar, western redcedar, and shore pine are most often encountered where soils are more poorly drained. Deciduous trees are uncommon in the temperate rain forests of Alaska, and are represented mainly by red alder and black cottonwood.

The Western Hemlock (Tsuga heterophylla) is a large evergreen coniferous tree growing to 150-200 feet tall, with a trunk diameter of up to 8 feet. It is the largest species of hemlock, with the next largest (Mountain Hemlock T. mertensiana) reaching a maximum of 140 feet. It is native to the west coast of North America, with its northwestern limit on the Kenai Peninsula, Alaska, and its southeastern limit in northern Sonoma County, California. It is closely associated with temperate rain forests, and most of its range is less than 75 miles from the Pacific Ocean. There is however an inland population in the Rocky Mountains in southeast British Columbia, northern Idaho and western Montana. It mostly grows at low altitudes, from sea level to 2,000 feet, but up to 6,000 feet in the interior part of its range in Idaho.

Western Hemlock boughs are used to collect herring eggs during the spring spawn in southeast Alaska. The boughs provide a easily collectible surface for the eggs to attach to as well as provide a distinctive flavor. This practice orginates from traditional gathering methods used by Native Alaskans from southeast Alaska.

Leaves — light green to medium green on top, with two whitish parallel lines beneath, 1/4 to 7/8 inch long, blunt-tipped, soft, shiny, and flat, growing from two sides of branch parallel to the ground
Cones — brown, oval-shaped, 5/8 to 1 inch long; thin, papery scales; hanging down at end of twig
Bark — reddish-brown when young, turning gray-brown; scaly when young, becoming thick and furrowed with age
Size at maturity and lifespan — 100 to 150 feet in height and 2 to 4 feet in diameter; 200 to 500 years
Distribution — sea level to subalpine areas; throughout the coastal forest of Southeast Alaska and north to Prince William Sound 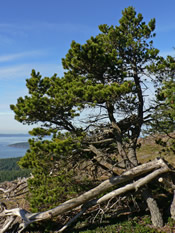 Depending on subspecies, Shore Pine (Pinus contorta) grows as an evergreen shrub or tree. The shrub form is krummholz and is approximately 3.3 to 9.8 ft high. The thin and narrow-crowned tree is 130 to 160 ft high and can achieve up to 6.6 ft diameter at chest height. The murrayana subspecies is the tallest. The crown is rounded and the top of the tree is flattened. In dense forests, the tree’s a slim, conical crown. The formation of twin trees is common in some populations in British Columbia. The elastic branches stand upright or overhang and are difficult to break. The branches are covered with short shoots that are easy to remove.
Leaves — yellow-green to dark green; 1 to 2 1/4 inches long; two leaves, each a half-round, bundled together, making a circle when pressed together
Cones — light brown; egg-shaped; 1 1/4 to 2 inches long; pointed backwards on branches; woody, with stiff prickles on the end of each scale
Bark — resinous and scaly, becoming furrowed with age; dark brown to blackish
Size at maturity and lifespan — often a small, scrubby tree; 20 to 40 feet in height and 8 to 12 inches in diameter; sometimes 75 feet in height and 18 to 32 inches in diameter on well-drained, sunny sites; 200 to 600 years
Distribution — especially in coastal muskegs; sea level to alpine zone; throughout Southeast Alaska, north to Yakutat

Red Alder (Alnus rubra) is a deciduous tree native to western North America, from southeast Alaska south to central coastal California. It is the largest species of alder in North America and one of the largest in the world, reaching heights of 66 to 98 ft. The name derives from the bright rusty red color that develops in bruised or scraped bark. The bark is mottled, ashy-gray and smooth, often draped with moss. The leaves are ovate, 2.8 to 5.9 inches long, with bluntly serrated edges and a distinct point at the end; the leaf margin is revolute, the very edge being curled under, a diagnostic character which distinguishes it from all other alders. The leaves turn yellow in the autumn before falling. The male flowers are dangling reddish catkins 3.9 to 5.9 inches long in early spring, and female flowers are erect catkins which develop into small, woody, superficially cone-like oval dry fruit 0.79 to 1.18 inches long. The seeds develop between the woody bracts of the ‘cones’ they are shed in the autumn and winter.

The Sitka Spruce (Picea sitchensis) is a large evergreen tree growing to 120-180 feet tall, and with a trunk diameter of 3-5 feet. It is by far the largest species of spruce, and the third tallest tree species in the world (after Coast Redwood and Coast Douglas-fir). Sitka Spruce is native to the west coast of North America, with its northwestern limit on Kodiak Island, Alaska, and its southeastern limit near Fort Bragg in northern California (Griffin & Critchfield 1972). It is closely associated with the temperate rain forests and is found within a few kilometers of the coast in the southern portion of its range.

Sitka Spruce is a long-lived tree, with individuals over 700 years old known. Because it grows rapidly under favorable conditions, large size may not indicate exceptional age. The Queets Spruce has been estimated to be only 350 to 450 years old, but adds more than a cubic meter of wood each year.

A unique specimen with golden foliage that used to grow on the Queen Charlotte Islands, known as Kiidk’yaas, is sacred to the Haida Native American people. It was illegally felled, although saplings grown from cuttings can now be found near its original site.

Sitka Spruce is of major importance in forestry for timber and paper production. It is used widely in piano, harp, violin, and guitar manufacture, as its high strength-to-weight ratio and regular, knot-free rings make it an excellent conductor of sound. The Steinway and Sons piano company is well known for using exclusively Sitka spruce soundboards in its pianos. The harp company, Lyon and Healy, is well known for it use of Sitka spruce for the soundboard of their harps as well. This wood is an important material for homebuilt aircraft for the same reasons.

Outside of its native range, it is particularly valued for its fast growth on poor soils and exposed sites where few other trees can be grown successfully; in ideal conditions young trees may grow 4 feet per year. It is naturalized in some parts of Britain where it was introduced in 1831 and New Zealand, though not so extensively as to be considered an invasive weed tree.

Newly grown tips of Sitka Spruce branches are used to flavor spruce beer and are boiled to make syrup.

The root bark of Sitka Spruce trees is used in Native Alaskan basket-weaving designs.
Leaves — dark green, 5/8 to 1 inch long, needle sharp, growing in all sides of branches from woody pegs (a trait common only to spruce)
Cones — light orange-brown, 2 to 3 1/2 inches long, usually found in the top quarter of tree, hanging down from branches, papery scales
Bark — thin and smooth, developing scaly plates with age, gray, becoming dark purplish brown with age
Size at maturity and lifespan — 150 to 225 feet in height and 5 to 8 feet in diameter, grows much larger in the southern part of its range, 500 to 700 years
Distribution — sea level to 3,000 feet elevation in Southeast Alaska, throughout Southeast Alaska, west to Kodiak Island and north to the coast of the Alaska Peninsula.

This species goes by many common names including Nootka Cypress, Yellow Cypress, and Alaska Cypress. Even though it is not a cedar, it is also often confusingly called “Nootka Cedar”, “Yellow Cedar”, “Alaska Cedar”, or even “Alaska Yellow Cedar”. Its name derives from its discovery on the lands of a First Nation of Canada, the Nuu-chah-nulth of Vancouver Island, British Columbia, who were formerly referred to as the Nootka. Nootka Cypress is native to the west coast of North America, from the Kenai Peninsula in Alaska, south to northernmost California, typically occurring on wet sites in mountains, often close to the tree-line, but sometimes also at lower altitudes.
Leaves — dark green; 1/16 to 1/8 inch long
Cones — patchy green and black, nearly round; 1/2 inch in diameter; scattered among the needles; sharp central point on each cone scale
Bark — shreddy; generally ash gray
Size at maturity and lifespan — 40 to 80 feet in height and 1 to 2 feet in diameter; slow-growing trees; 15 to 20 inches in diameter at 200 to 300 years; up to 1,000 years
Distribution — muskegs, alpine meadows, and nearby forests of Southeast Alaska as far north as Prince William Sound; sea level to timberline in Southeast Alaska, though mainly at elevation of 500 to 1,200 feet; common in northern Southeast Alaska scattered in southern Southeast