The Columbia is a large tidewater glacier, flowing directly into the sea.

The Columbia Glacier is one of the fastest moving glaciers in the world. The Columbia is a large 425 square mile, multi-branched calving glacier in south central Alaska that flows mostly south out of the Chugach Mountains to its tidewater termination in Prince William Sound. The Columbia Glacier was first documented in 1794 when it appeared to be stable with a length of 41 miles. During the 1980s it began a rapid retreat and by 1995 it was only about 36 miles long. By late 2000 it was about 34 miles long. The loss of a massive area of the Columbia Glacier’s tongue has generated a tremendous number of icebergs since the 1980s. After the Exxon Valdez ran aground while avoiding a Columbia Glacier iceberg in 1989, significant resources were invested to understand its iceberg production. As a result, Columbia Glacier became one of the most well-documented tidewater glaciers in the world, providing a bank of observational data for scientists trying to understand how a tidewater glacier reacts to a warming climate.

Here’s a link to the USGS website for more information on the Columbia Glacier.

The glacier’s speed of retreat at the terminus reached a maximum of nearly 98 ft per day in 2001, when it was discharging icebergs at approximately 1.7 cubic miles per year; the glacier has subsequently slowed down, resulting in an increase in retreat rate. The terminus has retreated a total of 9.9 miles at an average rate of approximately 0.37 miles per year since 1982. The retreat has been accompanied by nearly 1,600 ft of thinning at the present position of the terminus. In the next few decades it is expected to retreat another 9.3 miles, to a point where the bed of the glacier rises above sea level. Columbia Glacier’s retreat should be completed around 2020. Tidewater glacier advance and retreat is not directly forced by climate (adjacent tidewater glaciers may be simultaneously advancing and retreating), but rapid retreat appears to be triggered by climate-forced long-term thinning. 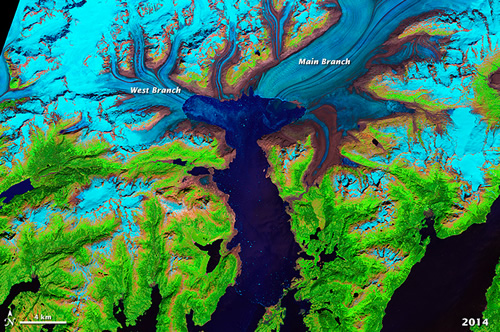 The Columbia glacier twists its way through western Alaska’s Chugach Mountains. The bald streak at the bottom of the mountains, called the trimline, shows this glacier has lost 1,300 feet of thickness. It has also retreated 10.5 miles since that measurement was taken.