Known in Alaska as ANWR

The Arctic National Wildlife Refuge (ANWR) is a whole lot more than just a flat wasteland as the oil companies claim it is. The people that live on the land want nothing to do with the drilling and the problems that go along with it. They know that if a major accident happens, they will have to leave their land forever. The oil companies neglect to mention that while they push for more drilling.

Perhaps the most unique feature of the Arctic National Wildlife Refuge is that large-scale ecological and evolutionary processes continue here, free of human control or manipulation. A prominent reason for establishment of the Arctic National Wildlife Refuge was the fact that this single protected area encompasses an unbroken continuum of arctic and subarctic ecosystems. Here, one can traverse the boreal forest of the Porcupine River plateau, wander north up the rolling tiaga uplands, cross the rugged, glacier-capped Brooks Range, and follow any number of rivers across the tundra coastal plain to the lagoons, estuaries, and barrier islands of the Beaufort Seas coast, all without encountering an artifact of civilization.

Incredibly beautiful and full of wildlife

Renowned for its wildlife, the Arctic National Wildlife Refuge is inhabited by 45 species of land and marine mammals, ranging from the pygmy shrew to the bowhead whale. Best known are the polar, grizzly, and black bear; wolf, wolverine, Dall sheep, moose, muskox, and the animal that has come to symbolize the area’s wildness, the free-roaming caribou. Thirty-six species of fish occur in Arctic Refuge waters, and 180 species of birds have been observed on the refuge.

The refuge encompasses the traditional homelands and subsistence areas of Inupiaq Eskimos of the arctic coast and the Athabascan Indians of the interior.

Along the northern boundary of the refuge, barrier islands, coastal lagoons, salt marshes, and river deltas provide habitat for migratory waterbirds including sea ducks, geese, swans, and shorebirds. Fish such as dolly varden and arctic cisco are found in nearshore waters. Coastal lands and sea ice are used by caribou seeking relief from biting insects during summer, and by polar bears hunting seals and giving birth in snow dens during winter.

The arctic coastal plain stretches southward from the coast to the foothills of the Brooks Range. This area of rolling hills, small lakes, and north-flowing, braided rivers is dominated by tundra vegetation consisting of low shrubs, sedges, and mosses. Caribou travel to the coastal plain during June and July to give birth and raise their young. Migratory birds and insects flourish here during the brief arctic summer. Tens of thousands of snow geese stop here during September to feed before migrating south, and musk oxen live here year-round. 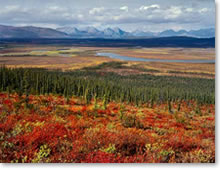 South of the coastal plain, the mountains of the eastern Brooks Range rise to over 9,000 feet. This northernmost extension of the Rocky Mountains marks the continental divide, with north-flowing rivers emptying into the Arctic Ocean and south-flowing rivers joining the great Yukon River. The rugged mountains of the Brooks Range are incised by deep river valleys creating a range of elevations and aspects that support a variety of low tundra vegetation, dense shrubs, rare groves of poplar trees on the north side and spruce on the south. During summer, peregrine falcons, gyrfalcons, and golden eagles build nests on cliffs. Harlequin ducks and red-breasted mergansers are seen on swift-flowing rivers. Dall sheep and wolves are active all year, while grizzly bears and arctic ground squirrels are frequently seen during summer but hibernate in winter.

The southern portion of the Arctic National Wildlife Refuge is within the boreal forest of interior Alaska. Beginning as predominantly treeless tundra with scattered islands of black and white spruce trees, the forest becomes progressively denser as the foothills yield to the expansive flats north of the Yukon River. Frequent forest fires ignited by lightning result in a complex mosaic of birch, aspen, and spruce forests of various ages. Wetlands and south-flowing rivers create openings in the forest canopy. Neotropical migratory birds breed here in spring and summer, attracted by plentiful food and the variety of habitats. Caribou travel here from farther north to spend the winter. Year-round residents of the boreal forest include moose, lynx, marten, wolverines, black and grizzly bears, and wolves.

Alaska Natives are against the drilling. (The oil companies forgot to mention this on Capitol Hill) 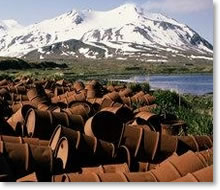 They are worried because the name Gwich’ in means caribou people and the caribou the Gwich’in depend upon for subsistence hunting give birth to their young inside a refuge thought to contain 9 billion barrels of oil. Only one oil field in the entire country is bigger than ANWR, Alaska’s Prudhoe Bay.

“Well, 10 billion barrels is a lot of oil. It would be the second largest oil field in North America,” said Ken Boyd, oil and gas consultant.

But in Arctic Village, where people still raise sled dog puppies and where getting a drink of water means going to out the river to fill up up a plastic container, people are fighting oil development. Fighting it because the nearest supermarket is in Fairbanks, 235 miles away and if oil development harms the caribou it would threaten their main source of food.

Their ancestors came to America during the last ice age by walking from Siberia. And now, like so many ancient cultures, the Gwich’in fear being displaced by progress. While there is universal opposition to ANWR drilling in Arctic Village, in the Inuit village of Kaktovik it’s a more complex story.

The last time any sort of poll was taken six or seven years ago, a majority of the voters in Kaktovik favored responsible onshore drilling. But pro-drilling sentiment does seem to be on the decline in Kaktovik. We know that the Gwich’in of Arctic Village are worried about the caribou hunt. The Inuit, on the other hand, are subsistence whalers. They fear that if ANWR drilling moves offshore and there’s an accident such as an oil spill, that would be devastating to the bowhead whales. A recent petition circulated in Kaktovik showed 62 people opposed to ANWR drilling. And only 98 voters turned out in the last election.

Climate change means more than just impacts on the environment of Alaska and other Arctic regions, it also means major expenses. Attempts are being made to include drilling in the Arctic National Wildlife Refuge in the budget bill this year. But with that possibility come the worries of Gwich’in Indians, who survive off the caribou population that lives in the ANWR region.