During a good year in Bristol Bay, a surge of more than 100 million pounds of sockeye salmon fights its way upstream, spawns, and dies. In Bristol Bay and elsewhere in Alaska, this incredible pulse of salmon carcasses enriches streams and rivers and makes young salmon hardier.

That’s the finding of scientists who study Alaska streams and rivers that are teeming with salmon. Aquatic ecologist Mark Wipfli of the University of Alaska Fairbanks’ Institute of Arctic Biology is one of those scientists who pull on rubber boots to find the ways that salmon enhance the waters of their birth and the surrounding forests. 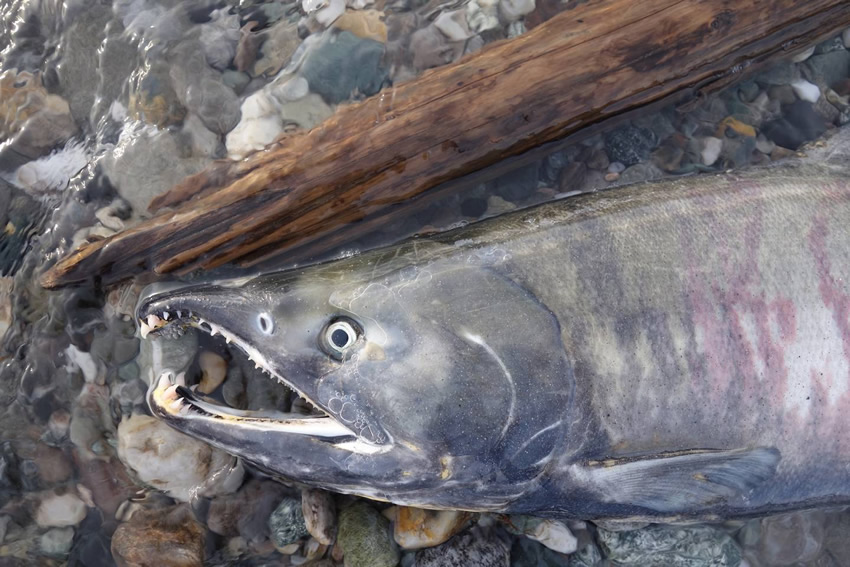 The process starts with the return of millions of salmon to Alaska rivers and streams. Nosing their way upstream, salmon are a swimming package of protein, fats and nutrients like nitrogen and phosphorus.

Bears are among the first to intercept them, carrying salmon away from the water and sometimes eating only part of the fish, like the brains of male salmon and the eggs of the females. Once munched by a bear, a carcass on land is fair game for flies and other insects, which lay eggs that soon grow into larvae. Heavy rains can wash larvae back into streams, where young salmon and other fish snap them up. Carcasses on land also provide food for other animals and fertilize streamside plants as they decompose.

Salmon that escape bears and other hazards go on to lay eggs — rich in protein, fat and nutrients — that are perhaps the best food in any stream. After salmon die and begin to disintegrate, algae and bacteria take up salmon nutrients, and aquatic insects in turn eat the thriving algae and bacteria. 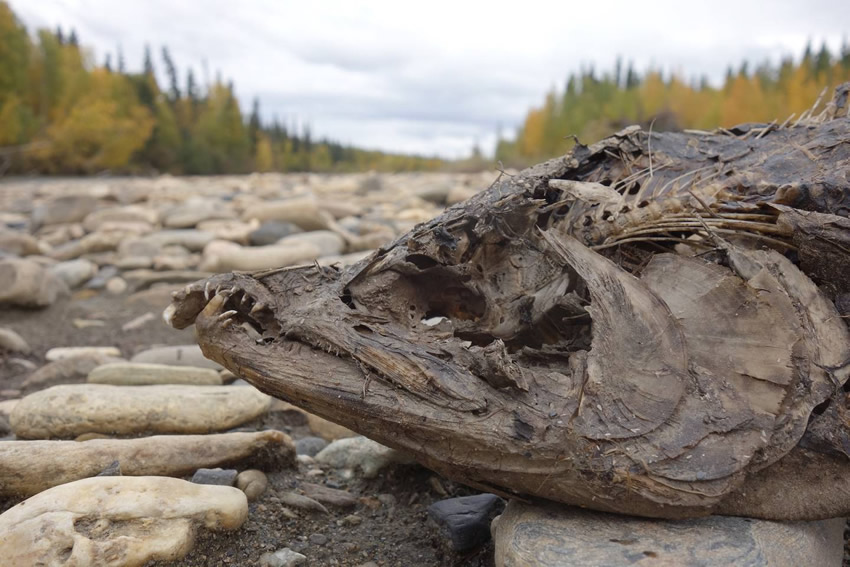 Aquatic insects also feed on specks of decaying salmon, and fish and birds reap the benefits of more insects. Nitrogen and phosphorus from the “salmon tea” that rivers become can penetrate the soil to about 200 feet from a stream, and scientists have found traces of ocean-derived nitrogen in shrubs and trees more than 1,500 feet from Southeast Alaska streams.

“These salmon literally bring back tons of fertilizer to these systems,” Wipfli said.

Curious about how salmon carcasses help young salmon, Wipfli and his colleagues set up “artificial streams” in Southeast Alaska by diverting small portions of existing streams through manmade channels in the forest.

The scientists enhanced the water of each artificial stream with different doses of salmon carcass to see how juvenile coho salmon responded. Young salmon exposed to two, three or four carcasses per square meter of stream bottom grew larger than salmon in habitats without carcasses.

Juvenile fish exposed to salmon were higher in omega-3 fatty acids than fish in water without carcasses and had much higher levels of lipids, fats that serve as energy reserves during lean times.

Wipfli and his colleagues have also compared natural streams with and without salmon, and have found salmon streams to be a better place for developing young fish and other animals.

“We’re learning now that salmon are not only making food webs more productive, but are improving the health of fish and other creatures that live there,” Wipfli said.

The lack of returning salmon in the Columbia and other Lower 48 rivers that had good populations before the advent of dams might be a reason restoration of salmon has not worked there, Wipfli said. The effect of millions of bodies fighting gravity and returning nutrients upstream is profound. Wipfli and other Alaska scientists believe what’s good for the salmon is good for the flying squirrel, black-tailed deer, Sitka spruce and arctic tern.

Ned Rozell is a science writer with the Geophysical Institute at the University of Alaska Fairbanks.