Here are a few of the most common Alaska Fish Species

Most of Alaska’s abundant, remote, and predominantly pristine freshwater fish habitats are largely unexplored and undocumented. Fishing in Alaska is the angler’s dream come true. Alaska’s oceans, rivers, and lakes are teeming with huge runs of record breaking Salmon, Rainbow Trout, Arctic Char, Halibut and many other challenging sport fish. Alaska, home to five species of Pacific Salmon, holds the world record for the King Salmon. Alaska Freshwater Fish awaits you in the most spectacular setting on earth.

Cutthroat Trout occur as sea-run or resident (non-sea run) forms in streams and lakes along the coastal range from lower Southeast Alaska to Prince William Sound and are the most common trout species in the region. Sea-run cutthroat are usually found in river or stream systems with accessible lakes, mostly south of Fredrick Sound.

The rainbow trout is one of the most respected and sought after of Alaska’s native game fishes. Serious anglers from the world over are drawn to Alaska to experience the thrill of challenging this hard fighting salmonid in the state’s wilderness waters. Rainbow trout occur as both freshwater resident and sea-run races. Sea-going rainbows are known as steelhead trout.

Imagine catching wild Steelhead – Alaska’s sea run Rainbow Trout – not hatchery fish. Alaska’s trophy-class lunkers are typically in the 29-37 inch range. These are powerful, fierce fighters that will have your rod pulsing and straining to meet the water.

Dolly Varden are plentiful in Alaska’s lakes and streams, providing year-round excitement. Most Dollies range from 10-21 inches. These tenacious trout leave no shortage of action – you may find yourself catching and releasing till your arms give out.

Without a doubt, the northern pike is a voracious predator — consuming three to four times its weight during the course of a year. Besides smaller fish, its diet includes frogs, crayfish, small mammals, and birds — almost anything within range. Northern pike inhabit protected, weedy bays. After the spring ice melts, they move further into the shallows and marshes to spawn. They retreat to deep, cool waters in summer. 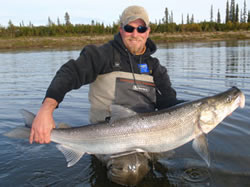 The sheefish is found only in arctic and subarctic North America and Asia. In Alaska, it is most abundant in the Kuskokwim and Yukon river drainages and in the Selawik and Kobuk drainages of Kotzebue Sound. A few are found in the smaller rivers of Norton Sound. Its tremendous size, fighting ability, and fine eating qualities make the sheefish one of the most unique fish in North America.

Alaska salmon swim wild throughout the cold waters of the Pacific Ocean, Bering Sea and Gulf of Alaska and are quite plentiful. Every year between 100-150 million salmon are commercially harvested in Alaska.

Lightly spotted on their blue -green back, King salmon live from five to seven years, and weigh up to 120 pounds. Known also as Chinook salmon, they have the highest oil-content, which is what gives a salmon its rich flavor. The king is the largest of all salmon species, and the most desirable to sport fishers.

Blue-tinged silver in color, sockeye salmon live four to five years. They weigh up to 7 pounds, and are the slimmest and most streamlined of the five species of Alaskan salmon. Known to fishermen in Alaska as reds, the sockeye is historically our most valuable fish because of its high oil content and ability to hold its bright red flesh color.

Bright silver in color, coho salmon live three years, weigh up to 15 pounds, and are a popular game fish sought by sport fishers. Coho are known as silvers when caught before full maturity. They are the most popular game fish of the salmon family, as well as one of the most valuable commercial species.

These are the smallest and most abundant salmon in area waters. Pinks have a two-year life cycle and average 3-5 pounds. Upon entering freshwater streams, pinks develop a dorsal hump, thus their nickname “Humpy.”

Halibut are by far the most popular bottom fish inhabiting the waters of Alaska. The Pacific Halibut is a toothy flatfish that is normally caught on or near the ocean floor. As with the majority of bottom fish, drifting or anchoring with bait are among the most preferred means of enticing these monsters, which can literally take hours to land. The largest Pacific Halibut ever caught while sport fishing, tipped the scales at 495 pounds.

Like Halibut and rockfish, Lingcod are usually found on or near the bottom, most often over rocky reefs in areas of strong currents. These fish are extremely aggressive predators, often growing to over 50 pounds in weight and 4 feet in length. These feisty fish usually range from 10-40 pounds and are abundant throughout Southeast Alaska’s fishing season.

One of the most desirable of the North Pacific Ocean’s groundfish, the Pacific cod is also known as grey cod, true cod or P-cod. It is similar to the Atlantic cod, with a belly shading grey to white, and has the typical chin barbel of the cod. The Pacific cod ranges the entire coast of Alaska and is harvested year round by trawls, longlines and pots.

Rockfish is a term used to describe over 35 species of light-fleshed bottomfish, including the yellow-eye (red snapper) rockfish and black sea bass. Most rockfish weigh between 1-6 pounds, with the yellow-eye being the largest, averaging 6 pounds. Rockfish are long-lived, and depending on the species, may reach ages of 30-100 years. Good rockfish fishing occurs during the warm summer months.