Haines is small town Alaska at its finest

Everything you thought Alaska would be is in Haines. In Haines you will find a perfect sampling of Alaska’s history, scenic beauty, arts and culture, wildlife and lifestyle. Located on the pristine shores of America’s longest fjord, glacier–covered mountains rising from the sea and numerous lakes and rivers teaming with fish and wildlife surround this town of 2400 year-round residents. Every fall, thousands of majestic bald eagles gather in the nearby Chilkat Bald Eagle Preserve.

Cruise ships bring quite a few visitors to town, creating a demand for excursions. There are a number of tours available, as well as charter boats. Although the sound of the flights is not universally enjoyed in town, small planes and helicopters use Haines as a launching point for flightseeing and air taxi service into the Tongass National Forest and Glacier Bay National Park. Situated where the Alaska ferry system meets Alaska’s road system, Haines is a well-used port for drivers who don’t want to travel the entire Alaska Highway. Many people board a ferry in Bellingham, Wash., float to Haines and then drive up the Haines Highway (passing through a part of British Columbia and Yukon Territory) and then on to Alaska’s Interior Alaska or Southcentral Alaska regions.
Here’s the Haines tourism website for more info on reaching there.

Over 3,000 eagles gather along a four-mile stretch of the Chilkat River north of Haines, Alaska each fall to feed on a late run of salmon. This wildlife spectacle is the largest gathering of eagles in the world. Warm water upwellings in the river keep this stretch of the Chilkat River ice-free providing access to Haines the fish when food supplies are exhausted elsewhere. Eagles flock from as far away as Washington State for the abundant feast. Starting in late October, eagles by the hundreds can be seen along the sand bars and in cottonwood trees in the Alaska Chilkat Bald Eagle Preserve. The peak of the gathering usually occurs in mid-November.

Condensed from Wikipedia: The area around present-day Haines was called “‘Dtehshuh” or “end of the trail” by the Chilkat group of Native Americans called the Tlingits. It received this name because they could portage (carry) their canoes from the trail they used to trade with the Interior, which began at the outlet of the Chilkat River, to Dtehshuh and save 20 miles of rowing around the Chilkat Peninsula. 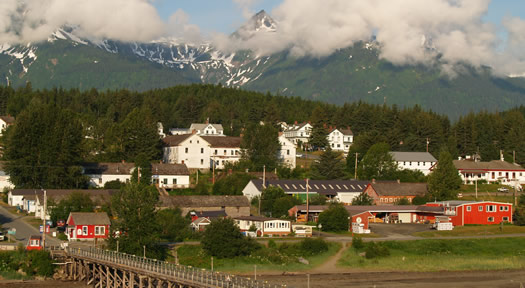 The Klondike Gold Rush of 1898–1899 changed the region greatly. The population of the area reached 30,000, composed largely of Americans. Haines grew as a supply center, since the Dalton Trail from Chilkat Inlet offered a route to the Yukon for prospectors. Gold was also discovered 36 miles from Haines in 1899 at the Porcupine District. During this time the name Haines came into use for the area around the mission and not for just the mission itself.

The economy continued to grow and diversify. Four canneries were constructed around the mission by 1900. However, the completion of the White Pass and Yukon Route railway in neighboring Skagway that same year led to the Dalton Trail’s eventual abandonment and Haines’ economic decline.

In 1903, the Hay-Herbert Treaty entrusted the border decision to arbitration by a mixed tribunal of six members, three American and three Canadian–British, who determined in favor of the United States, resulting in the present-day border.

Fort William H. Seward, a United States Army installation, was constructed south of Haines in 1904, on property donated by the mission from its holdings. In 1922, the fort was renamed Chilkoot Barracks. It was the only United States Army post in Alaska before World War II. During World War II, it was used as a supply point for some U. S. Army activities in Alaska. The fort was deactivated in 1946 and sold as surplus property to a group of investors who called it Port Chilkoot, thus forming the Port Chilkoot Company. Port Chilkoot was incorporated as a city in 1956. In 1970, Port Chilkoot merged with Haines into one municipality. In 1972, the fort was designated a National Historic Landmark and the name, Fort William H. Seward, was restored.

Haines is also home to a very unique museum. The Hammer Museum provides a unique view of the past through the use of man’s first tool. From ancient times, through colonial days and the industrial age, the hammer tells the story of man’s progress and ingenuity. This quaint and quirky museum is an interesting and informative stop for the whole family. This is the world’s only museum dedicated to hammers, with over 1,400 on display.
The Hammer Museum website.

Haines has a maritime climate characterized by cool summers and mild winters. Summer temperatures range from 46 to 66; winters range from 10 to 36. Temperature extremes have been recorded from -16 to 90. Total precipitation averages 52 inches a year, with 133 inches of snowfall.

Haines is located on the western shore of Lynn Canal, between the Chilkoot and Chilkat Rivers. It is 80 miles northwest of Juneau, just south of the Canadian border of British Columbia.

Haines is located between the Chilkoot and Chilkat Rivers on the western shore of the longest fjord in America, the Lynn Canal.

Located 80 miles north of the state capital; Juneau – 30 minutes, Skagway – 10 minutes. After arriving in Juneau on Alaska Airlines, daily scheduled flights to Haines are provided by Skagway Air Service, and Wings of Alaska.

Alaska’s Marine Highway – 2 ½ to 4 ½ hours depending on which ferry vessel is scheduled. Skagway is approximately one hour by State Ferry and 35 minutes by Chilkat Cruises, a local ferry transportation during the summer for passengers only (no vehicles).

Haines shares a border with 20 million acres of protected wilderness. The heart of Alaska’s Glacier Bay National Park is approximately a 15 minute flight from Haines. Canada’s Kluane National Park and Tatshenshini–Alsek Provincial Park are just up the road.