How Bad are the Mosquitoes in Alaska?

Depends where and what time of year. In Anchorage not so bad. Kenai, Denali or north of the Arctic Circle in the Spring. Yikes. The Alaska mosquito population is the stuff of legend. There are 35 species of Alaska mosquito. All but a few of these will feed on humans. Mosquitoes are by far the most prevalent bugs, which is why they remain lord of the flies. Every year, they congregate in hordes that are thickest from the Yukon River north to the Arctic Ocean and torment the Caribou and humans relentlessly. There are “safe” times in Alaska if you just don’t want to fight the mosquitoes. That’s before about the 20th of June and after the end of July. They really “bloom” then but that’s the only bad time. There are white socks and no-see-ums too, and they can be bad in some places.

Do Alaska mosquitoes carry diseases like the West Nile Virus?

Only two of the state’s 35 species of Alaska mosquito have been found to carry the virus in the Lower 48. Chances of the virus taking hold in Alaska are slim, according to wildlife veterinarian Kimberlee Beckmen and Jim Kruse, an insect expert at the University of Alaska Museum. Birds carry the virus, and mosquitoes spread the virus by biting infected birds and injecting it into other birds, people or horses. Alaska has natural limitations for the spread of the virus. The scientists at the CDC agree that it’s a long shot for the West Nile Virus to establish itself in Alaska. The disease has not made it to higher latitudes of Europe and the two mosquito species that have transmitted the virus most often in the Lower 48 don’t live in Alaska. “Until we start getting dead birds up here, there’s no reason to worry,” Kruse said. 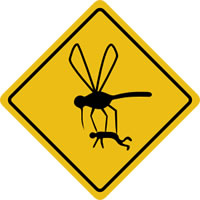 What months are Alaska mosquitoes most active?

Mosquitoes are more than a nuisance in the summer in northern Alaska; they are a genuine problem. Be vigilant. Keep your windows rolled up, enter and exit the vehicle quickly and close the doors, or dozens of the little devils will enter in a minute. Don’t park near water for picnics or overnight, if possible. Beware of walking into the shade. Mosquitoes love the shade. Buy high-quality bug repellent and purchase mosquito coils, available in most general merchandise stores in Alaska. Burn a coil for 20 minutes while you are out of the vehicle; that will kill the mosquitoes. It doesn’t smell too good, though. Don’t become a mosquito dinette: wear a long-sleeved shirt and pants.

If you do find yourself in a heavy congregation (mosquitoes seem to be most active at dawn and twilight), there are easy steps you can take to block out the nuisance: Try to expose as little skin as possible. Wear shoes, long sleeves, and long pants with the cuffs tucked into socks.

No question, DEET is the most effective method of combating the Alaska Mosquito. You’ll always want at least 20 – 30% DEET in your repellent. If you’re in a heavy bug territory, 95% (or 99%) DEET completely protects you. The bugs will come near, then fly away-as if you’re protected by an invisible shield.
DEET doesn’t smell obnoxious, but it’s a strong chemical (you can sometimes taste it in your mouth from being absorbed through the skin) so only apply it directly on the skin of your face, hair, neck, and hands. For the rest of your body, rub it on your clothes. And never use 95% or more DEET on small children.

Follow the product directions-it WILL melt certain camera cases and jacket fabrics!
If used with a sunscreen, apply the repellent 30 minutes to one hour after the sunscreen.
Never use it on wounds or irritated skin (it stings and gets absorbed)

Wash it off as soon as you’re out of Alaska Mosquito land.