A Native American village about 400 miles west of Anchorage

The fishing village of Emmonak Alaska is a Native American village about 400 air miles northwest of Anchorage. The village is located near the west coast of Alaska accessible only by air or the Yukon river. Emmonak (Imangaq in Central Yup’ik) is primarily made up of Yup’ik Eskimos living a subsistence lifestyle. The Yup’ik Eskimos of the Yukon-Kuskokwim Delta area in Western Alaska live in an environment that is very different from our stereotyped images of a barren, icy, harsh existence. They live on a mostly flat, marshy plain crisscrossed by many waterways, which the Yup’ik used in place of roads. Emmonak residents subsist on fish, seals, waterfowl, and moose.

Because this region is below the Arctic Circle, temperatures are more moderate and hunting and fishing continued most of the year. Temperatures can range from -80F in winter to 80F in summer. 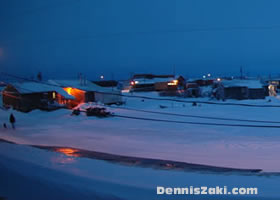 Emmonak was originally called “Kwiguk,” a Yup’ik word meaning “big stream.” Villagers call themselves “Kuigpagmuit,” or “people from the Yukon River.” The original settlement was 1.4 miles south of its present location, and was first reported by the U.S. Coast and Geodetic Survey in 1899. A post office was established there in 1920. Later, commercial fishing became a major industry in the village and the northern Commercial Company built a cannery. In 1964, the cannery was washed away by floods. Due to increasing flooding and erosion, Emmonak was relocated 1.4 miles north of Kwiguk in 1964-65. The new location was renamed Emmonak, which means “black fish.”.

Emmonak Alaska is about 400 air miles northwest of Anchorage.

Michaels talks about the potential of her Yupik Eskimo students.