Journey into the Valley of Ten Thousand Smokes

[fusion_dropcap]O[/fusion_dropcap]ne hundred years after the largest volcanic eruption of the 20th century, the Valley of Ten Thousand Smokes is still a moonscape of ash and volcanic rock, without a tree or shrub in sight. The valley, located on the Alaska Peninsula where the Aleutians hook on to mainland Alaska, is a silent reminder of the power and potential of Alaska’s volcanoes.

I once visited the valley as one of a dozen people on a 10-day field trip with John Eichelberger, who then worked at the Alaska Volcano Observatory. As we approached the valley the first day on a bus ride from Brooks Camp in Katmai National Park, the story of the 1912 Katmai eruption began to unfold. 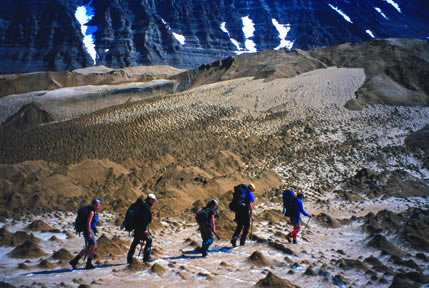 A few miles before we reached the valley, we saw the skeletons of spruce trees, bone white and surrounded by green bushes. The trees have been standing dead since early June 1912, when falling ash killed them.

Getting off the bus and hiking into the valley, we left Alaska for another world. As we walked deeper into the valley on rounded rocks that felt like styrofoam balls, the willows disappeared, the sparrows stopped singing, and the mosquitoes vanished. A grizzly bear had pressed a few tracks into the valley floor, but we saw no other signs of life.

Botanist Robert Griggs named this desolate, beautiful place “The Valley of Ten Thousand Smokes” when he visited here on a National Geographic expedition in 1916. At the time, four years after the eruption, steam poured from vents all over the valley. Because the thick blanket of ash and volcanic rock has cooled since then, the valley no longer steams, but the dramatic landforms still inspire the feelings of Griggs and his companions in 1916. “We were overawed,” he wrote.

In three days of the summer of 1912, a volcano Griggs named Novarupta (Latin for “new vent,”) transformed 40 square miles of the world’s best bear habitat into instant badlands, burying the downwind valley in more than 500 feet of ash and volcanic rock. Novarupta spewed 100 times more material than Mt. St. Helens and sent skyward a plume that probably reached 20 miles high. Sometime during the eruption, Mt. Katmai, six miles from Novarupta, was decapitated. In place of its summit today is a magnificent crater lake surrounded by 300-foot walls that echo the thunder of glaciers that now calve into lake.

When Krakatoa volcano in Indonesia ejected half as much ash and rock in 1883, 35,000 people died. Because earthquakes that preceded Novarupta’s eruption scared residents of two nearby villages from the area, Novarupta’s human death toll was zero. More than one foot of ash fell on Kodiak, 100 miles away from Novarupta, in the days following the eruption. Roofs collapsed under the weight of the ash and the steady gray ashfall prevented townsfolk from seeing a lantern held at arm’s length at times.

In his report for the National Geographic Society, Griggs wrote that if such an eruption occurred on Manhattan Island, those in Chicago could hear the explosions, Philadelphia residents would be buried under one foot of ash, and fumes from the eruption would tarnish brass doorknobs in Denver. On Manhattan Island, “there would be no survivors,” Griggs wrote.

Much to the relief of the locals in both places, Alaska is not Manhattan; Alaska is a place with more than 100 volcanoes, 42 of which have erupted since people began writing down such observations in 1767.

Today, the Alaskans who keep the closest eye on volcanoes work for the Alaska Volcano Observatory in Anchorage and Fairbanks. Scientists there take the pulse of the most active volcanoes in Alaska with networks of seismometers that detect earthquakes within volcanoes. They also check out satellite images each day, looking for ash plumes or increases in temperature on volcano surfaces that indicate activity, perhaps someday as dramatic as the eruption that created the Valley of Ten Thousand Smokes.