California Governor Brown Stops Off In Alaska To Talk Climate

A few Alaska researchers recently accepted a surprise assignment of giving Jerry Brown a tour of the Seward Peninsula.

The California governor was stopping in Nome on his way to a meeting in Russia. The 79-year-old environmentalist and leader of a state that resembles a progressive nation wanted to learn why the far north matters. He had never been to the Arctic or Alaska before. 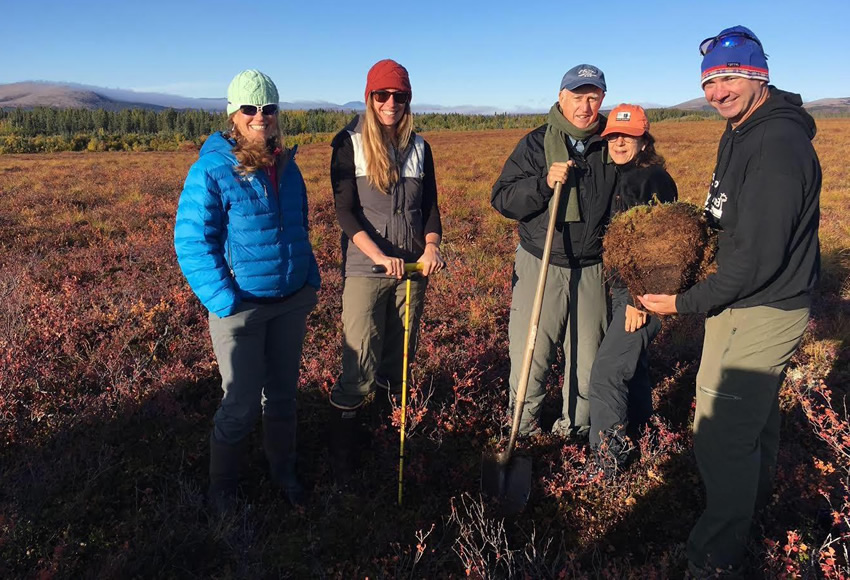 Amy Breen and Bob Bolton were his tour guides and educators. Both work on the Seward Peninsula; Breen is a terrestrial ecologist who works with tundra plants and Bolton is a hydrologist who specializes in the interaction of the peninsula’s frozen ground with its many waterways. Both work at the International Arctic Research Center, part of the University of Alaska Fairbanks.

On Labor Day weekend, Bolton and Breen traveled to Nome. Breen texted her contact with the governor’s traveling party, which had just landed in Nome aboard a jet. Breen indicated she and Bolton were staying in a hotel with a bar and would be there the rest of the night if Brown wanted to meet before their tour the next morning.

“In a few minutes, we turned around and saw the governor, his wife and their entourage walk in,” Breen said.

For the next few hours, Bolton sat on a stool next to the California governor and in rapid-fire fashion discussed subjects that often circled back to Brown’s two top concerns: nuclear disarmament and climate change.

“They told me I was the first person who ever asked to carry a handgun while I was with the governor,” Breen said. “She pointed behind us and said, ‘I don’t think those guys over there will allow it.’”

Breen turned and saw two men she had not noticed. They were the governor’s bodyguards.

Breen did not carry her gun the next day, when the group drove the gravel road that leads 72 miles from Nome toward Council. Bolton and Breen have research sites on the tundra along the roadway, which ends at the Niukluk River. Council is on the far side of the river and there is no bridge.

During their five hours of driving with the governor, the scientists stopped a few times so Brown could step out and see the landscape of bushy shrubs, sharp hills and clear waterways.

“He was saying it was barren and stark,” Breen said. As a botanist who knows the diversity of plants and other living things up here, she wanted him to come away with a greater appreciation for the landscape.

At one stop, the Alaska scientists led Brown and his wife out on the spongy mat of tundra plants. There, they handed Brown a sharpened steel rod attached to a T handle. Bolton demonstrated how to push the rod in the ground until it stopped.

Brown did so, shoving until the rod penetrated about two feet. There, he hit permafrost, frozen ground that had endured the heat of 2017’s summer and many previous ones.

Bolton then sunk a shovel into the tundra, working up a plug of soil, roots and plants from the surface. In that hunk of earth was the scientists’ answer to why Jerry Brown should care about a place with so few people.

The bottom of the chunk was a frozen black mass, the remains of ancient plant life that contains stored carbon from another epoch. If current trends continue, warmth will further penetrate the ground, awakening microbes that will then munch on those ancient plants and belch carbon dioxide and methane. Looking over the endless tundra landscape, Brown seemed to realize the magnitude of the far north’s potential to release greenhouse gases.

“He was really into numbers and perceptive,” Breen said. “He asked how much carbon was stored in the permafrost.”

Lydia Vaughn, a postdoctoral student at the University of California Berkeley along for the trip, told the governor permafrost holds about 2,000 gigatons of carbon. That is about half of the carbon stored in all of the world’s soils.

There was another number that impressed him even more, Breen said. Brown is part of a group of city and state leaders committed to cutting greenhouse emissions enough to prevent 2 degrees Celsius of future warming.

Breen handed him a map of Alaska showing the statewide average of 3.7 degrees Fahrenheit (2.1 degrees C) warming in mean annual temperatures from 1949 to 2016. Some places, like Utqiagvik (Barrow), have warmed much faster than the world as a whole (4.5 degrees F in the recent 57-year period).

“We’ve already surpassed that (2 degrees warming) in Alaska, and arctic Alaska is warming even faster,” she said.

After an intense 24 hours with one of the most influential and environmentally active leaders in America, Breen and Bolton said goodbye to Brown and his wife with hugs. They watched his jet depart thinking that a wedge of cold northern soil might have its story repeated in places far away.

“I left pretty energized to have our science inform policy,” Breen said. “It’s not something we always do.”