To Alaska and then some for Yukon Lynx

[fusion_dropcap]A[/fusion_dropcap] lynx that roamed more than 200 miles from Kluane Lake in the Yukon Territory to near Chitina is still being tracked across the Alaska landscape, thanks to a curious couple living off the Edgerton Highway. 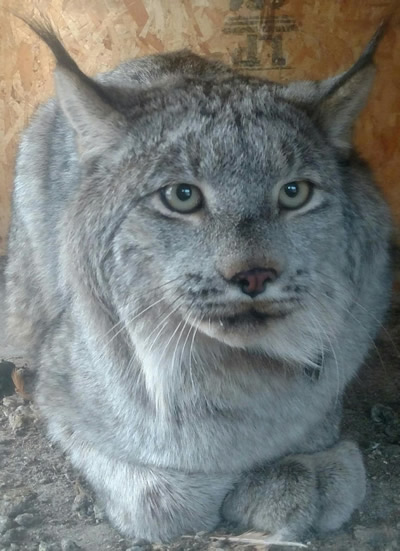 A lynx that a couple in Kenny Lake captured in their chicken house. Photo by Linda Lohse.

“My wife saw a lynx out there, sitting next to the chicken coop like a lion, twitching its tail and looking at the chickens and ducks,” said Ralph Lohse, who lives with his wife Linda on property between the Edgerton Highway and the Tonsina River. They watched the lynx for 40 minutes, until it leapt to webbing on top of a chicken coop.

They went outside to prevent it from getting a chicken. The startled cat ran off with a group of their sheep, as if all the animals were in the same herd.

In a few days, the Lohses noticed a few chickens were gone. Then two ducks disappeared.

They knew the culprit, seeing its round-as-a-cheeseburger tracks in the snow. The couple installed a motion detector on their chicken/duck pen. Every time they heard a buzz, they knew the lynx had returned.

Picking up a rifle was Ralph Lohse’s first thought. But the fur trapper and his wife had had seen a collar around the lynx’s neck and knew someone was studying it.

“I’ve taken probably 400 lynx over the years,” Ralph said. “It’s not like he would be a good trophy or anything. We were much more interested in where it came from.”

The Lohses took action after the lynx tried to kill one of their sheep. The sheep, which had only one eye and one ear before the attack, escaped with a few puncture wounds to the neck, but died three days later. When the lynx came back for another duck, the couple had a plan.

They tracked the animal to where it had been eating the duck and picked up the remainder of the carcass. They placed it inside a stout chicken house they use to rear chicks.

When their motion alarm sounded, they went out to the chicken house. The lynx was inside. Ralph closed the door.

Lohse called Frank Robbins, the Alaska Department of Fish and Game biologist in Glennallen. Robbins contacted biologists in Tok who study lynx. They learned the animal was collared by another group of scientists working near Kluane Lake in the Yukon. Biologists there captured and collared Max on January 28, 2016.

From then until October, the lynx wandered west over the Alaska border. In May, when the lynx was near the White River, the battery for its collar died. How it crossed the Wrangell St. Elias Mountains is anyone’s guess, but the lynx probably did not see many people.

“I could walk from here to Kluane and never cross a piece of civilization,” Ralph Lohse said.

Dash Feierabend and Dana Fjare of the Tetlin National Wildlife Refuge traveled to Kenny Lake. They tranquilized the large male lynx in the chicken coop. They removed the collar and put on another. They transported the lynx about 50 miles down the Richardson Highway and released it near the Tiekel River.

Knut Kielland, a UAF biologist who heads up a lynx study across several national wildlife refuges in the Interior, provided the new satellite collar for Max.

In his distinctive vernacular, Kielland remarked on the lynx’s trip from Kluane Lake to the home of the Lohses at Kenny Lake.

On Dec. 5, Kielland tracked the lynx via his computer. He pinpointed its location at noon on the ice of the Tonsina River between Tonsina Lake and the Richardson Highway.

Kielland and his colleagues have studied lynx in the Tanana River basin and Fortymile River country. Many of those animals have a home range of 30 square miles. Some, however, really move, such as a male that traveled 60 miles north of its capture location in the Tetlin National Wildlife Refuge last summer.

Max may have wandered to look for snowshoe hares, the preferred food of lynx, or to establish a new breeding territory.

Most collared lynx send their last data points from where they are caught in leg-hold traps, but Max’s story is different.

“I was just flabbergasted,” Kielland said of the Lohses’ act of live-trapping the lynx. “That’s so cool.”

The lynx is now again on the Tonsina River, but seems to be moving away from the Lohses and toward the high country of the Chugach Mountains.

“I don’t really want him to come back, but I’d like to see him again,” Linda Lohse said.

Endnote: Thanks to Matt Lorenz of the Copper River Record for letting me know about this story, which he was the first to report.