Augustine Volcano sits alone, a 4,000-foot pyramid on its own island in Cook Inlet. Like many volcanoes, it has a tendency to become top heavy. When gravity acts on Augustine’s oversteepened dome, rockslides spill into the ocean. A scientist recently found new evidence for an Augustine-generated tsunami from a time when Egyptian pharaohs built their own pyramids.

Zebulon Maharrey’s record of a tsunami deposit from 4,200 years ago extends a long record of Augustine’s collapses into the sea. A graduate student at the University of Alaska Fairbanks, Maharrey has spent the last four years looking at the volcano. Augustine last erupted in 2006, sending an ash cloud two miles high and oozing enough lava to create a new summit. 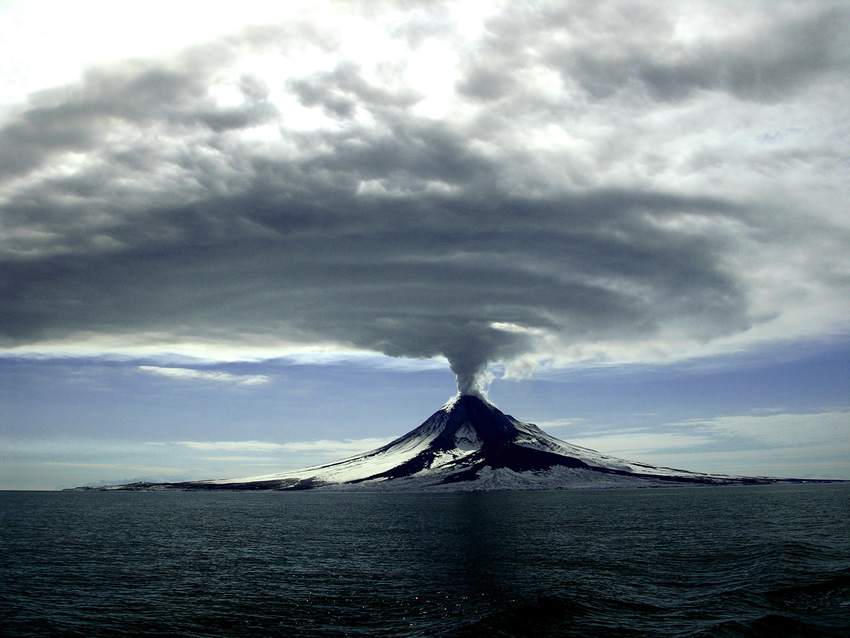 In Nanwalek, a village on the southern flank of the Kenai Peninsula and 50 miles east of Augustine Volcano, Maharrey found small pieces of wood and other tsunami debris in an eroded face of peat, 21 feet above high-tide level today. He also discovered more than one dozen ash layers that came from Augustine and mounts Katmai and Spurr.

Maharrey’s dating of tsunami deposits from more than 4,000 years ago extends the Augustine tsunami record by about 2,000 years. Maharrey’s academic advisor Jim Beget had found evidence of Augustine splashes into the sea from 1,400, 1,700 and 2,100 years ago.

Maharrey became interested in looking at Augustine’s history after Beget showed him the following account from the logbook of the Alaska Commercial Company. Someone wrote on Oct. 6, 1883:

“This morning at 8:15 o’clock, 4 tidal waves flowed with a westerly current, one following the other . . . the sea rising 20 feet above the usual level. At the same time the air became black . . . and it began to thunder.”

That writer indicated something happened in 1883 that didn’t in 2006: part of Augustine crumbled. Because the mountain is surrounded by wide apron, it takes a tremendous landslide to send a wave in the direction of Nanwalek, now home to 177 people.

During field expeditions to the western shore of Cook Inlet, Beget found debris from the 1883 tsunami near Mount Iliamna, Nanwalek and Homer.

The newfound tsunami date at Nanwalek shows that Augustine is a repeat offender at piling lava above the tipping point.

In 1883, the extreme tides of Cook Inlet saved the village from being swamped. Because the Augustine-induced tsunami happened at low tide, the 20-foot rise of the sea had the same effect as a random high tide. Researchers think perhaps a few kayaks were lifted away and a few shelters were destroyed, but no one was killed.

Most of the village of Nanwalek is built on a high terrace above the beach, Maharrey said, but an Augustine-generated tsunami today at high tide could inundate the airstrip and low-lying areas along the beach. As the tsunami wave progressed, it would flood coastal areas all around southern Cook Inlet to several feet above the tideline. Or, if it happened at dead low tide, another Augustine tsunami might not wet anything.