Seventy million years ago, the baddest predator on top of the world was a pygmy tyrannosaur about half the size of Tyrannosaurus rex. The creature became known to the world in mid-March 2014, when Texas-based dinosaur hunters Tony Fiorillo and Ron Tykoski unveiled it in a scientific journal.

Nanuqsaurus hoglundi was named for the polar bears that walk the sea ice not far from where its bones turned to stone and for a donor to the Perot Museum of Nature & Science in Dallas. Fiorillo and Tykoski named the dinosaur. Fiorillo is curator of earth sciences at the museum and a frequent visitor to Alaska. Tykoski is the fossil preparator at the museum. 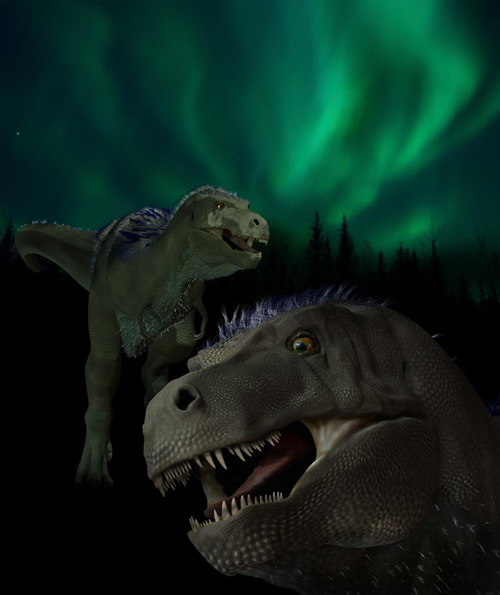 Like the polar bear, Nanuqsaurus was in its day the dominant meat-eater of the far north. The prehistoric North Slope was a green plain spilling beneath the baby Brooks Range with a climate that could have been something between Portland and Calgary today. Fiorillo calls this the “ancient greenhouse Arctic.” Roaming that land of ferns and small trees were at least four other meat-eating dinosaurs and four plant eaters.

His 2006 discovery of Pachyrhinosaurus perotorum, a four-ton plant-eater with a massive shielded head and a horned beak, led Fiorillo to Nanuqsaurus.

On a rocky hillside above the Colville River, Fiorillo and his colleagues were clearing surface rocks from what they suspected was a Pachyrhinosaurus skull turned to stone. Before they chucked the basketball-size rocks, Fiorillo spotted broken dinosaur bones poking from a few. He set them aside.

At the end of the dig, he included the surface rocks in a helicopter slingload from the river to a small airstrip. From there, a fixed-wing pilot carried the rocks to Fairbanks. A truck hauled the dinosaurs down the Alaska Highway and all the way to Dallas.

There, at the Museum of Nature & Science, Tykoski chipped and carved dinosaur bone fragments from the rock to which they were fused. Like a sculptor, he revealed the Pachyrhinosaurus skull, now a display piece for the museum.

When he had time, Tykoski picked up the blocks Fiorillo had found on the hill as the team was preoccupied with the Pachyrhinosaurus. He chipped down to the bones, saw something curious and called Fiorillo. On an upper jaw fragment, they noticed a suturing pattern that only occurs on adult dinosaurs. It was enough to tell them they were looking at a species as yet unidentified.

“We had just two or three fragments from the skull,” Fiorillo said. “We had exactly the parts we needed to tell this was something different. It wasn’t the quantity but the quality.”

Nanuqsaurus looked a lot like T. rex, except for its size. A man would stand about as high as Nanuqsaurus’s hip. It was 20 feet long from tail to nose. Filled with killer-whale teeth, its skull was two feet long. Two twiggy arms extended from its torso.

Fiorillo and his colleagues have pointed out that Troodon, a smaller meat-eater that probably ran from Nanuqsaurus, had very large eye sockets. Larger eyes possibly gave Troodon an advantage in the dark season. With its long nasal cavity, Nanuqsaurus probably had a great sense of smell useful for snuffling around in the dark.

Nanuqsaurus being half the size of T. rex could also have been an adaptation to the extreme latitude, Fiorillo said. Seventy million years ago, the Colville River was even farther north than it is today. During the long dark season, many things Nanuqsaurus ate probably migrated away or hibernated. Nanuqsaurus may have evolved a smaller body size to deal with the lean times, though how any northern dinosaurs flourished is a mystery.

“We still don’t know how they survived an arctic year,” Fiorillo said.

One thing Fiorillo knows is that Nanuqsaurus has left its tooth marks in many bones from the Colville, including his prized Pachyrhinosaurus fossil.

“We knew some big predator was eating them,” he said.

In introducing Nanuqsaurus to the world, Fiorillo finds it hard to fathom the paleontological richness of a quiet, rocky bluff above the Colville River where it turns north and runs for the Arctic Ocean.

“It is absolutely mind-boggling to me that out of the same hole in the ground we got two new animals,” he said.