Coyotes are everywhere, even in Alaska

[fusion_dropcap]L[/fusion_dropcap]ast Friday, an email popped up in all the mailboxes of people with the Geophysical Institute: Someone saw what might have been a wolf on the trails north of the UAF campus. “Please be cautious if skiing in the area.”

A few people responded, saying they had seen one or two coyotes roaming the 1,000-plus acres of trails and frozen wetlands just north of campus buildings and roads.

UAF ski trail groomer Jason Garron has had several encounters, saying he believes the animal is a coyote that is “large and healthy looking.” Kate Millburg saw a wolf or coyote while she was skiing that looked about “80 pounds, nicely furred and healthy.” Rebecca Rolph has seen what she believes is a coyote in the same area while she was running and driving to work. 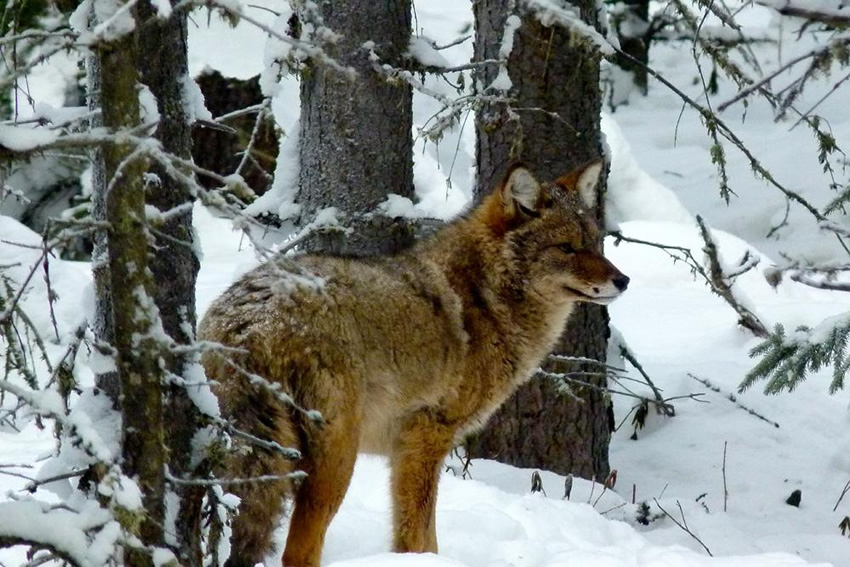 Fairbanks teacher Jim Lokken snapped this image of a coyote he has seen several times near University of Alaska Fairbanks ski trails. Photo by Jim Lokken.

Biologists said coyotes were more likely what people saw on the university trails. Coyotes have been in Alaska since at least the early 1900s.

“People are always surprised to hear about coyotes, but they are certainly around,” said Mike Taras, an expert tracker and outreach specialist with the Alaska Department of Fish and Game in Fairbanks.

Department biologists do not keep track of coyote numbers, but Fairbanks-area trapper Randy Zarnke said coyotes began showing up on his trapline trails three or four years ago.

“Now, all I have left is coyotes,” he said. “Not sure if they ate all the other furbearers or just chased them away.”

Coyote pelts fetch less money than marten or lynx, Zarnke said, so he does not try to trap them. He’d like to remove them from his trapping grounds because they’ve eaten foxes from his snares in each of the last three seasons. But he finds coyotes difficult to trap.

The adaptable creatures have been among the first large animals back into areas people have settled, wrote Donald Cornelius in the Alaska Department of Fish and Game’s Wildlife Notebook Series entry on the coyote.

“The elimination or reduction of wolves from many areas of North America, coupled with land and clearing activities, have contributed to this range extension,” he wrote.

Based on reports from more than 100 years ago, biologists figure that coyotes were first on the mainland of Southeast Alaska and then migrated northward into the upper Tanana Valley. From here, they spread all over Alaska, with the highest numbers on the Kenai Peninsula, Mat-Su valleys and the Copper River valley. Few people have reported seeing coyotes north of the Yukon River.

In areas without wolves, which eat coyotes and keep their numbers down, the dog-like creatures with pointy ears and snouts are just about everywhere. People have seen coyotes in all five boroughs of New York City, and in Chicago, Los Angeles, Seattle and every major city in North America. Maybe it shouldn’t be surprising we share our vast acreage with them.