Many Signs of Alaska’s Climate Change

In anticipation of an arctic science conference happening next month in Fairbanks, an editor asked me to write a column on climate change in the north.

I told her climate stability would be the bigger story, since basswood trees used to grow in Fairbanks and redwoods once dropped their cones into the Porcupine River. Climate is always changing.

But we have gotten much better at measuring those changes. We people and our scientific instruments have now occupied the top of the globe for long enough to record what has happened during the last few decades. Long-term data sets have some punch. 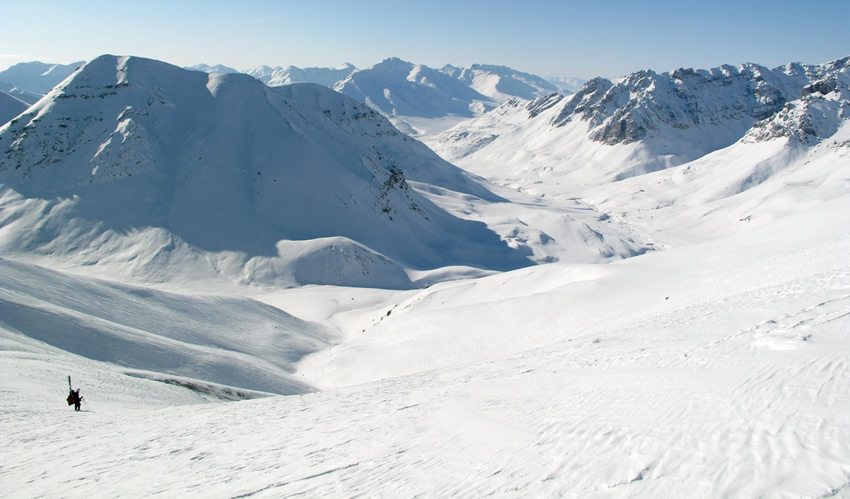 The accelerated loss of ice in several forms is a well-documented story of change in Alaska. Photo by Ned Rozell.

I asked people smarter than me for their all-star northern sets of data: Enduring observations of emotion-free instruments set out to record what is happening. Here are a few, each related to things frozen:

Sea ice: The 1979 launch of satellites that could transmit reliable pictures of Earth allowed us to look at the ice floating on the Arctic Ocean. While 36 years isn’t very long, it has been enough to show that the white toupee of ice on top of the world is thinning and shrinking. Ice that reflected sunlight like a mirror is now dark water that absorbs heat. Because sea ice has not been fusing itself to Alaska’s northern coastline as it once was, Barrow has become more like Norway. Every October there since 2001 has been much warmer than the years when sea ice formed earlier and stayed later. And the ocean sucking all that heat isn’t just showing local effects. Scientists are blaming wacky weather events all over the globe on waning northern sea ice.

Permafrost: Ground that became frozen during a colder period and has remained that way through the heat of at least two summers (sometimes thousands of summers). The earth deep beneath our feet doesn’t react to a warm summer or a snowless winter with human alarm. It calmly transitions, after years of warm or cold temperatures. It shows a trend. That’s why it was surprising to see a longtime permafrost scientist at a major conference in December saying he has changed his mind regarding the coldest permafrost in Alaska, beneath the North Slope. “Now, I can’t say that near-surface permafrost is safe (from thawing) during this century,” Vladimir Romanovsky said. “I used to say it was OK for this century.” What’s the big deal if permafrost thaws? Not only would some of the North Slope sink as much as 20 feet (and not in an orderly fashion), but the warmth would awaken soil microbes. Those hungry organisms will feast on prehistoric plant and animal remains and belch out molecules of greenhouse gases carbon dioxide and methane.

Glaciers: Alaska’s thousands of glaciers are the resting place of snows that fell yesterday and many years ago. Those ribbons of ice worm along in trenches between mountains all over Alaska. Almost all of them are shrinking fast. After a few decades of continued study, glaciologists say this: During the last 20 years or so, Alaska’s glaciers melted as much as all of Antarctica’s glaciers (Antarctica is as large as eight Alaskas). Alaska glaciers added one-third as much water to the ocean as did Greenland’s ice sheet from 2005 to 2010. This is despite Alaska’s ice having 1/20th the area of Greenland’s. UAF’s Chris Larsen and many colleagues have made these calculations by measuring glaciers each year with instruments mounted on aircraft and satellites. Alaska’s extreme weight loss is showing up as sea spray in a storm topping a levee in New Orleans.

These examples are among the best documented and most dramatic examples of measured change in the north. As one of the experts said, “there are dozens more.”