NEAR BALLAINE LAKE — Over the blat of engines and hum of tires on nearby Farmers Loop, Mark Spangler hears the chuckles of the animal he is studying. Male wood frogs in a one-acre pond on the campus of the University of Alaska Fairbanks are singing a song of spring.

The mating calls of several frogs ring off the eardrum. It’s a piercing noise created by air in the inflated cheeks of a creature that could hide in a moose track.

“It only takes one bold individual to call and then they all jump in,” Spangler said. 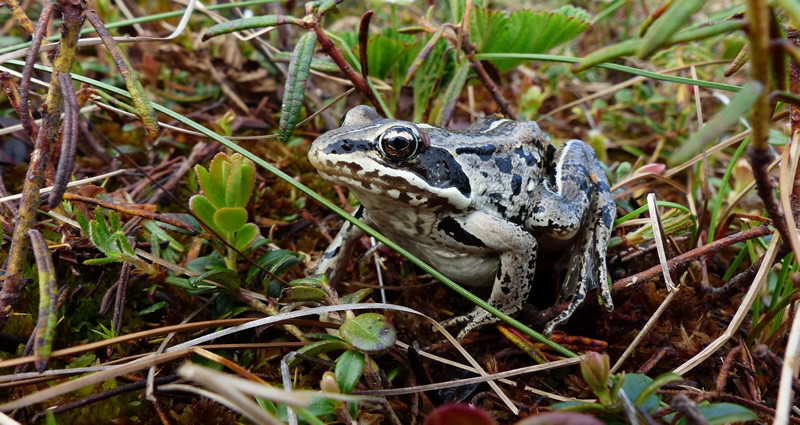 A wood frog, the only amphibian in northern Alaska. Photo by Mark Spangler.

The UAF master’s degree student wants to use a new technique to answer a basic question about the only amphibians in northern Alaska: How far north do they live?

“There are verified sightings in Anaktuvuk (Pass), Coldfoot and Wiseman,” he said of the farthest-north reported frogs.

Wood frogs freeze solid — even their hearts — as they hibernate each winter in a shallow cup of leaves and soil. Each spring, those adults thaw. They emerge to find their way back to a place like this — a pond that dries up and vanishes by summer solstice.

Perhaps wood frogs choose these ephemeral ponds to breed, lay eggs and generate tadpoles because they contain no fish that would eat frogs, Spangler said. Ideally, the water body lasts long enough for the entire life process from mating to development of tadpoles into adult frogs. When the frogs mature, they don’t seem to need water as much. People see them far from lakes and ponds.

To find out more, Spangler is dipping samples from wetlands on a road trip to the Arctic Ocean. Soon, he will drive north from Fairbanks and spend a week gathering water samples from here to the Yukon River. He will then continue north, sampling off the Dalton Highway north to Coldfoot. The week after that he will crest the Brooks Range at Atigun Pass and travel as far as Toolik Field Station. During his final week, he will drive all the way to Prudhoe Bay.

He is using environmental DNA analysis to determine if frogs were recently in the water he samples and filters. If a frog was in a certain body of water, its genetic material will in theory show up in his lab results. The technique is young and will have its kinks, but Spangler is excited to try it. He’ll also use a dipnet to gather frog eggs and larvae to help verify his eDNA results.

Why study frogs? Amphibians are among the most at-risk species in the world, Spangler said. And despite the work done on northern frogs by UAF’s Brian Barnes (who once glued radio transmitters to frogs and found out where they hibernated), we know very little about Alaska wood frogs.

“It could be they were always on the North Slope but nobody really noticed it,” he said.

As one of Alaska’s few herpetologists, Spangler is recruiting people for the FrogWatch USA program. He wants to enlist volunteers to monitor their favorite frog pond and report activity there to better understand frog populations in Alaska. In Fairbanks, he will run a training session for volunteers on May 1 at the Creamer’s Field Visitor’s Center from 4 to 6 p.m. He will follow that with a field trip in the refuge from 7 to 8 p.m. He may host similar get-togethers in Anchorage and Juneau.