Ice Worms: Enigmas of the North

Recent research on the ice worm has shone some light on the tiny creature that appears when the sun sets on warmish glaciers.

Few people have seen ice worms, but they are not mythical. Wispy and less than one inch long, ice worms live on glaciers, wriggling to the surface at night and sometimes lingering in meltwater pools during the day. They seem to be dormant during the winter. No one knows how long they live, or if they might have the ability to resurrect themselves after their bodies dry out.

The worms are both hardy and delicate. They live on ice, but will dissolve in the heat of your palm. Scientists in Washington once estimated there were more ice worms on a glacier there than there are humans on Earth. An ecologist once searched a good portion of the Alaska Range and found none. 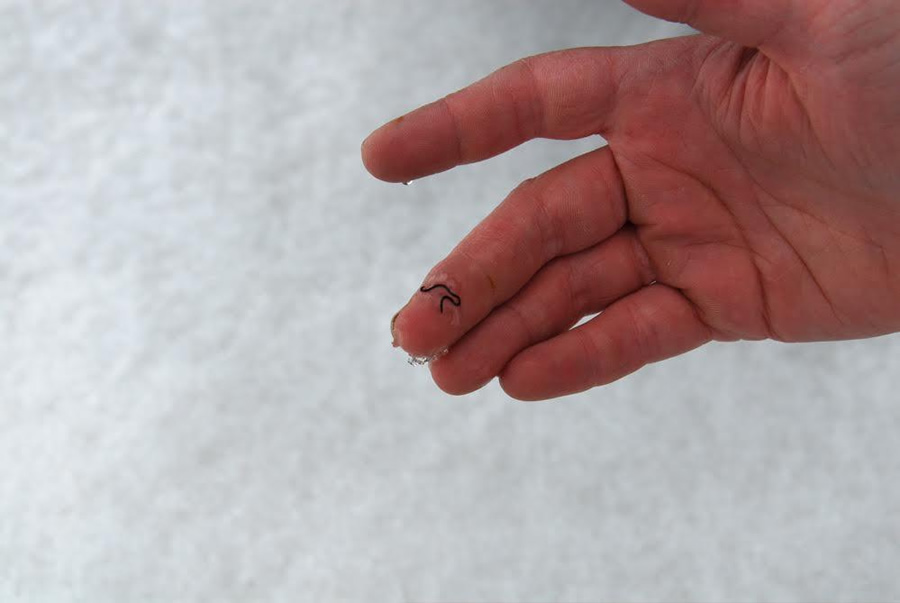 An ice worm on Bering Glacier. Photo by Chris Larsen.

That scientist, Roman Dial of Alaska Pacific University, condensed much of what is known about the ice worm in a recent paper.

Ice worms live on glaciers overlooking the Pacific coast from the Kenai Peninsula all the way down to Oregon. There is an unexplained absence of the worms in what seems like suitable habitat on the Juneau Icefield and glaciers near there.

The farthest north ice worms Dial found live in the Chugach Mountains behind Anchorage. After hearing mountaineers’ reports of seeing ice worms in the Alaska Range, Dial visited the reported locations and other likely spots. He squinted at patches of wet snow on the glaciers in similar places he’d seen worms on other glaciers. He and his partners saw no worms on the entire traverse.

Dial and his colleagues figured they found no worms on Alaska Range glaciers because those glaciers and others farther north are too cold. They wrote worms “do not inhabit glaciers with over-winter temperatures below – 7 degrees C (19.4 degrees F) on the previous summer surface.”

Using tissue samples from a few of the worms Dial and others collected from their survey of 200 glaciers, they found ice worms have been around for at least a couple million years. Way back when, they may have diverged from a freshwater worm and adapted to life on ice.

Using the DNA results, Dial saw an oddity: Chugach-type worms crawling on glaciers near Sitka, Vancouver Island and the Olympic Peninsula of Washington. Since the worms don’t move very fast on their own, Dial and his coauthors figured birds might have spread them.

Migrating rosy finches and snow buntings probably feed on ice worms during late summer and fall after nesting in the alpine. When eating the worms, the birds may walk over the worms’ cocoons, which stick to their feet or bills. When the birds fly south, winds might force them to land on glaciers farther south. In this way, worm larvae might take a fabulous ride from southeast Alaska to Vancouver Island or the Olympic Peninsula.

Dial concludes the paper, published in Arctic, Antarctic, and Alpine Research, with thanks to all the graduate students who helped him during the past decade. One of those was his son. The 27-year-old disappeared while traversing Costa Rica’s Osa Peninsula in July 2014.

“This study is dedicated to the memory of Cody Roman Dial, who helped with fieldwork as a teenager (counting worms on Harding Icefield) and with genetic analysis (writing a paper on ice worms’ biogeography) as a young man.”