From a NOAA Press Release:

Toxins from harmful algae are present in Alaskan marine food webs in high enough concentrations to be detected in marine mammals from Southeast Alaska to the Arctic Ocean, including whales, walruses, sea lions, seals, porpoises and sea otters, according to The next link/button will exit from NWFSC web site new research published today.

Harmful algal bloom toxins have been known to cause mortality and illness in marine mammals in Central and Southern California on a regular basis for the past 17 years, but this phenomenon has not been recorded in northern regions. The findings reported online in the journal Harmful Algae document a major expansion of the areas along the Pacific Coast of North America where harmful algal blooms are known to occur and demonstrate that algal toxins are present in Arctic ecosystems with the potential to affect most marine mammal species in U.S waters farther north than expected. 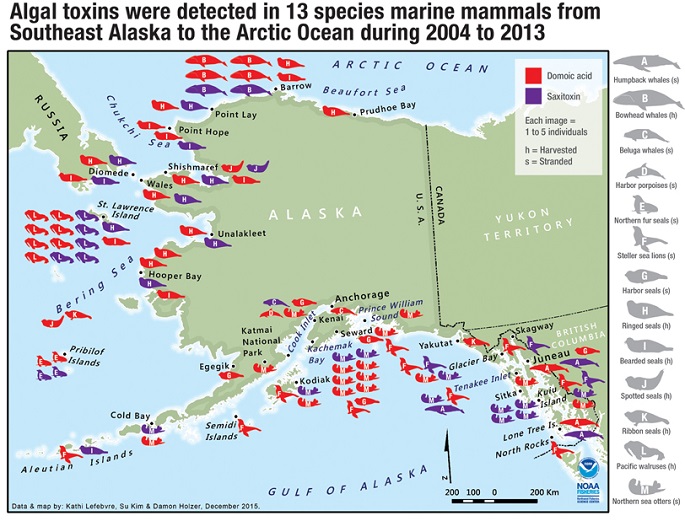 The Wildlife Algal-toxin Research and Response Network for the West Coast (WARRN-West) collected samples from more than 900 marine mammals that were harvested or found stranded in Alaska from 2004 to 2013. Testing at NOAA Fisheries’ Northwest Fisheries Science Center found algal toxins present in some animals from each of the 13 marine mammal species examined, and from all regions in Alaska.

“What really surprised us was finding these toxins so widespread in Alaska, far north of where they have been previously documented as a problem for marine mammals,” said Kathi Lefebvre, a NOAA Fisheries research scientist who leads WARRN-West. “We do not know whether the toxin concentrations found in marine mammals in Alaska were high enough to cause health impacts because of how difficult it is to confirm cause of death in stranded animals. But we do know that warming trends are likely to expand blooms, making it more likely that marine mammals could be affected in the future.”

The two main algal toxins detected in marine mammals were domoic acid, produced by algae called Pseudo-nitzschia, and saxitoxin, produced by algae known as dinoflagellates. Favorable conditions can cause the toxin-producing algae to “bloom.” Shellfish like clams, small plankton-eating invertebrates such as krill, as well as fish such as herring can accumulate the toxins as they feed by filtering the water. Marine mammals preying on contaminated krill, fish or shellfish will then absorb the toxin themselves.

Lefebvre stressed that the presence of the toxins in marine mammals is not currently a food safety risk, but could be a food security issue for subsistence communities that depend on marine mammals for food. 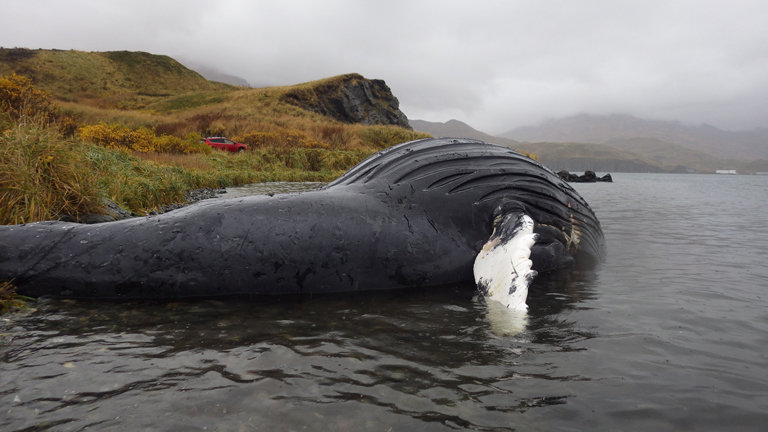 The levels of algal toxins measured in Alaskan marine mammals were well below the seafood safety regulatory limits for domoic acid and saxitoxin, and commonly eaten tissues like muscle and blubber are not likely to accumulate toxins to levels of concern for human consumption. However, Gay Sheffield of the University of Alaska Fairbanks and coauthor of this study warns that, “fresh clams found in the stomachs of harvested walruses and bearded seals are often eaten in several coastal communities throughout western and northern Alaska.” Such practices may be of concern for human health if toxin-producing algae increase in the Arctic as waters warm.

High levels of domoic acid produced by an unprecedented algae bloom on the West Coast of the United States last summer forced closures of shellfish and crab fisheries in Washington, Oregon, and California, as well as documented domoic acid related illness in marine mammals as far north as Washington.

The results from Alaska animals sampled in 2004-2013 cannot determine whether algal toxins caused the deaths of about 30 large whales in Alaska during the summer of 2015, prompting NOAA Fisheries to declare The next link/button will exit from NWFSC web site an Unusual Mortality Event. Algal toxins were investigated as a possible contributor to the large whale UME, but the carcasses were too degraded by the time they were found to produce useful test results.

Recently, a separate study found that California sea lions that had experienced domoic acid poisoning lost much of their spatial memory, which could jeopardize their survival in the wild. 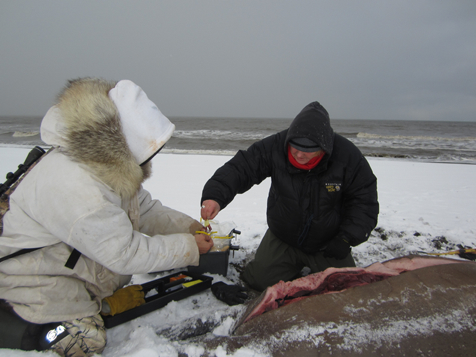