Skiing across the raw, open landscape of the Seward Peninsula a few weeks ago, my friends and I dreamed of getting out of a big wind and into the tub at Serpentine Hot Springs. 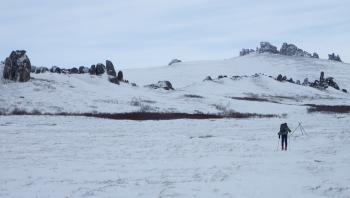 Though none of us had been there, we all recognized the Serpentine valley by black tors guarding the surrounding hillsides. With yellowish light and silky lenticular clouds as a backdrop, the landscape had a not-of-this-Earth feel.

If it wasn’t for the treated-lumber tripods marking the trail from Shishmaref, we might have thought we were the first people to visit. But we were within a spear’s throw of a hill where hunters had left behind stone points at a time the Bering Land Bridge was drowning.

Ted Goebel was in the same spot a few years ago. He is an archaeologist educated in Fairbanks and now with the Center for the Study of the First Americans at Texas A&M University. Goebel had heard of former Park Service archaeologist Bob Gal’s find of stone spear tips on a hill near Serpentine Hot Springs. Goebel and a few coworkers went back for a closer look during the summers of 2009 through 2011.

They found the same points Gal had. Even better, they dug and found the points deep beneath the surface. Near them was charcoal, possibly from the willow fires of ancient hunters.

Those buried points made the Serpentine site special. Stone spear points that have flat grooves that run up the face—what archeologists refer to as “fluting,” are not found everywhere. The delicate technique, used to streamline the rock, is on stone points from the oldest sites in North America, like in Clovis, New Mexico. Archaeologists had found fluted points in northern Alaska and the Yukon before, but those were on the ground surface or near it. Points found in western Russia just across Bering Strait are not fluted.

Serpentine “was the first time in Alaska someone found fluted points in a buried and datable context,” Goebel said, adding that BLM researchers made a similar find off the Kivalina River shortly afterward at a site called Raven Bluff.

Goebel and his coworkers found eight fragments of spear points at or near the Serpentine site. They carbon-dated the charcoal they found with the points. The carbon was about 12,000 years old, which is about when the Bering Land Bridge was disappearing because of rising sea level.

The same type of points from Clovis, New Mexico, are 1,000 years older.

“We think these things either mean there was back migration (from the heart of North America) toward the land bridge or the Paleoindians (of farther south in North America) might have introduced technology that moved back north and finally made its way back to Alaska,” Goebel said.

He pictures the treeless bluff near Serpentine Hot Springs as a place hunters would scan for caribou and bison while working on the chert tips for their spears. Their leavings led Goebel to write in a paper “Serpentine may represent the northwesternmost outpost of late Paleoindians in the Americas.”

The area around Serpentine Hot Springs, in one of the nation’s least-visited national parks (Bering Land Bridge National Preserve), has a Pleistocene feel. Of the landscapes I’ve visited in Alaska, the windswept whiteness is one of the easiest in which to imagine skin-clad hunters squinting at steppe bison, planning a stalk through granite tors.