An Oasis on the Seward Peninsula

On a recent ski trip across the Seward Peninsula, I followed a trail along the Pilgrim River broken by five friends. Their path led to a subarctic oasis.

Beyond the blank white of frozen river was a small settlement nestled in balsam poplar trees 60 feet high. The cleared fields, old farm equipment, scattered pine trees, and two-story building with a cross on top seemed more Wisconsin than Alaska. The only sound was the whisper of wind through naked branches. 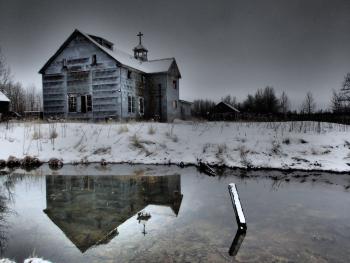 Pilgrim Springs has not always been this quiet. In the last few years, researchers with UAF have drilled there, looking for the hottest spots amid the steaming pools and snowless fields. They and others with private firms and the state are trying to see if Pilgrim’s energy might be a viable source of geothermal power.

This quest, driven in part by high fuel prices 60 miles away in Nome, is not a new one. The Department of Energy also funded several studies in the late 1970s that resulted in reports of a robust system, which have fueled repeat visits to the site with newer tools and holes drilled in different spots.

Economics will dictate whether the Native corporation-owned ever generates power for a community on-site (as Bernie Karl has done at Chena Hot Springs) or produces enough electricity to export to Nome.

For now, Pilgrim Springs has a population of two — a great horned owl sitting on a nest constructed on the church and its mate hooting from the former nuns’ quarters. The owls live on an island of forest habitat in the middle of a land with no trees. Both buildings supporting the owls are part of the Catholic mission started there in 1919.

Alaska state historian Michael Kennedy documented the known history when he got Pilgrim Springs on the National Register of Historic Places in the late 1970s. Though the site has probably attracted people since they squinted at steaming ground there after crossing the Bering Land Bridge, Kennedy wrote of the twentieth-century history of an orphanage that operated there. The country had a need for an orphanage after one of the deadliest organisms in the history of mankind invaded the Seward Peninsula.

The 1918 Spanish flu killed millions of people worldwide. It spread to the peninsula when a passenger carried the virus to Nome on the last steamship of the season. The flu soon spread inland, where Natives with no resistance to the virus had no chance. All the people in the village of York died, as did 72 of 80 in Brevig Mission. More than 1,200 died on the peninsula.

The Catholic Diocese of Nome had acquired the Pilgrim Springs homestead in 1917. Officials assigned the dependable Father Bellarmine Lafortune to build and operate what became Our Lady of Lourdes Orphanage.

Lafortune and his crew built 15 structures, most of which still stand. The most impressive is the church, which featured a place of worship on the upper story and a lower floor with a spacious kitchen, housing and offices for all the priests and brothers.

“Because of the thermal heating it enjoyed flush toilets,” Kennedy wrote. “All of the major buildings had inside, cold-water plumbing—a respectable luxury for that part of the world.”

The staff at the orphanage—a total of about 20 priests, nuns, brothers and others—”provided homelife, religious education and domestic training for an average of 100 orphans annually.”

As the years passed and the flu orphans became adults, the ministry closed. In 1941, staff members boarded up the buildings, and the Catholic Church never reopened the mission.