If a lake drains on top of the world, will anyone hear it?

Ben Jones and Chris Arp did. The Anchorage- and Fairbanks-based scientists placed sensors in a bathtub-shaped lake on Alaska’s northern coast a few years ago. From what they can tell, the lake topped its rim and eroded/thawed a channel to the Beaufort Sea on July 5, 2014. With a flow greater than some northern rivers, the lake’s water spilled into the ocean. 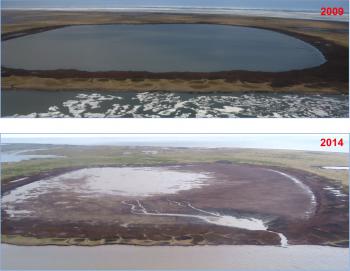 A lake on the shore of the Beaufort Sea that drained on July 5, 2014.
Image courtesy of Ben Jones.

Northern lakes have formed, filled and emptied for thousands of years, but this is the first time scientists have observed it with instruments. Jones, of the USGS Science Center and Arp, of UAF, were intrigued by the lake on their first trip to the Arctic together in 2007. About 100 miles southeast of Barrow, part of the lake’s shore was a bluff over the Beaufort Sea. They guessed the lake would drain by 2020, and wouldn’t it be interesting to see what happens?

The pair know a lot about the ubiquitous bodies of water that stain the map blue in northern Alaska. Each of the past four springs, they have snowmachined a 900-mile loop over the heart of the North Slope. They pause at dozens of lakes, shovel away snow and drill holes in ice. If the lakes are not frozen to the bottom, they bottle water samples for analysis later in a warm lab.

From traveling with them last spring, I know their work is cold, windy and not instantly rewarding. But all those samples and instruments installed in a shotgun pattern sometimes pay off in dramatic ways.

Lakes form and disappear in the far north all the time (drained lake basins make up more than 60 percent of the arctic coastal plain), but few people have seen it happen.

Why did the lake drain? In a paper just published, Jones and Arp write that heavy winter snowfalls and early summer rains pushed up the water level until the lake cut its bank. The water that ran to the sea eroded and thawed an ice-wedge network, forming a channel six feet deep.

Why does it matter if a brackish body of water in a place with no people is now dry land? That lake was a safe place for black brant to float while the migratory geese replaced their flight feathers. And even though lake drainage is a common event, it might be becoming more so.

With less sea ice floating on the Beaufort Sea, there is more free water to be transformed to rain and snow. On their traverse last year, Jones and Arp found that snow tended to be deeper on top of lakes that were closer to the Arctic Ocean than the Brooks Range. Ice beneath that snow tended to be thinner. That contrasted with other years, when the farther-north lakes had thicker ice. Teshekpuk Lake had ice eight feet thick in the early 1970s; it was five feet in 2014.

Is that trend going to continue? That’s why Jones and Arp will be out on snowmachine again, installing instruments, making measurements and thawing dinner inside a Teshekpuk Lake cabin. Starting next week, the pair and a few colleagues will leave snowmachine tracks from Toolik to Teshekpuk lakes and then back to Toolik Field Station about three weeks later. Follow their trip through perfect whiteness here: arcticlakes.org/calon-blog.