As he contemplates another long snowmachine journey, Matthew Sturm might consider packing a raincoat. Rain fell in Interior Alaska a few weeks before his trip, glazing supercooled highways and forming a crust on the snowpack.

“You remember all the jokes about how climate change is going to be good for (Alaskans)?” said Sturm, a snow scientist with UAF’s Geophysical Institute. “Now it’s like the joke’s on us. Rain makes a mess of our snow. It’s not better for us or for animals.” 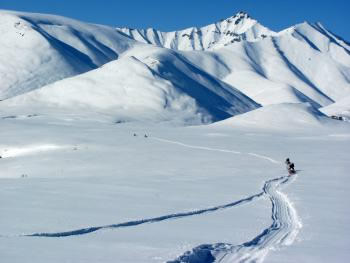 Snow scientist Matthew Sturm took this photo of the Sadlerochit Mountains while on a spring 2014 snowmachine traverse of northern Alaska.
Photo by Matthew Sturm

The rain event did not dissolve the snowpack in the middle of Alaska. Instead, the water drained through almost invisible channels within the snow column.

“It makes an icicle-like drain pipe within the snow,” said Sturm, who has seen the rain conduits in cross section. “The water is only going down a limited number of drain pipes.”

Extreme rain events can destroy a meager snowpack and flood out the subnivean world under the snow where voles live, but a thick coating of snow can be resilient to rainfall.

“Think of it as a sponge,” Sturm said.

Sturm, 62, is preparing for another of his long-distance traverses, versions of which he has executed since 1990. Following one such trip, from Fairbanks to Hudson Bay in 2007, he wrote the book Finding the Arctic, a travelogue and history primer on the far north.

On March 18, 2015, he and four other people will ride down the Yukon River boat ramp in Circle and head north toward Fort Yukon. Taking snow measurements along the way, they will drive up the Porcupine River and take a left up the Coleen River. From there, Sturm, snow scientist and frequent trip partner Glen Liston, Chris Polashenski from Dartmouth College, Heidi Helling of the Arctic National Wildlife Refuge and graduate student Simon Filhol will traverse to Arctic Village, then head northward to the continental divide in the Brooks Range. From there, they’ll drive down the Canning River, slant easterly to Kaktovik and then double back to Prudhoe Bay. There, arctic climate scientist Mark Serreze and Andrew Slater will join for a ride southward to Toolik Field Station.

Eight hundred miles of snow sampling and riding will take one month. Among many other questions, Sturm and others will be pondering why the higher slopes of the Brooks Range don’t get more snow than the lowlands, as is the case of the Rocky Mountains of Colorado and many other places. And how might snow patterns be changing with more open water and less sea ice?

The travelers hope they will be far enough north to avoid pulling out their raincoats.

“The million-dollar question: is rain on snow increasing?” Sturm said. “It seems to be, but the records for these kinds of events are pretty poor.”

But evidence for past rain events is out there. Sturm’s dog Miñik will not be riding a snowmachine this month, but her name means “a freezing mist of light rain” in Inupiaq from Barrow.