Alaska’s Denali May Become A Volcano

[fusion_dropcap]N[/fusion_dropcap]orth America’s highest mountain should be a volcano. Denali sits about 60 miles above where the Pacific Plate grinds beneath the North American plate, as do Iliamna, Redoubt and Augustine. If you draw a line from the Aleutians to volcanic features in interior Alaska, the curve goes over Denali’s summit.

Like its neighbors in the Alaska Range, the big mountain shows no signs of having erupted. But seismologists recently noticed deep shaking that was intriguing enough to explore.

About one year ago, a seismic station in Denali National Park between the Toklat River and the Eielson Visitor Center recorded an earthquake about 20 miles deep. It wasn’t big, a magnitude 1.7, but it shook longer than most earthquakes. 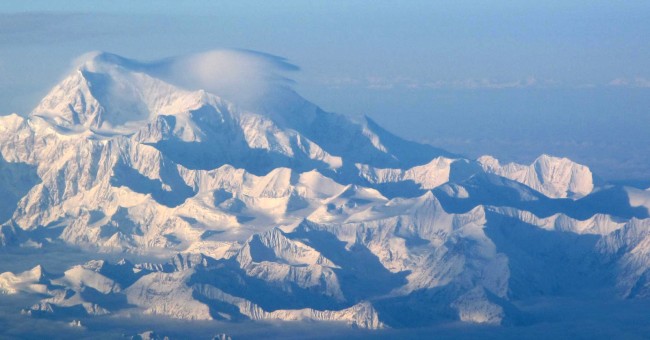 Despite volcano-like rumbles deep beneath the mountain, Denali will not erupt soon. (Photo by Ned Rozell/UAF Geophysical Institute)

“These are volcanic-like earthquakes,” the type that happen when molten rock oozes beneath the surface, said Stephen Holtkamp, a researcher with the Alaska Earthquake Center. “They are right where volcanoes should be, right above the subducting slab at 100 kilometers depth.”

Mount Spurr, a volcano across Cook Inlet from Anchorage, erupted explosively in 1992. It hums all the time with earthquakes like the ones Holtkamp studied beneath Denali. Mount Spurr is on the southern end of what scientists call the Denali Gap, a 270-mile silent swath of the Alaska Range that could be pimpled with volcanoes but does not seem to be.

On the north end of the gap are two ponds filled with dark water near Healy. Volcanologists recognize these as maars, craters that formed when molten rock reached the water table and detonated. This event happened about 3,000 years ago, when the Iron Age began and the world held 50 million people, few of them near Healy. Rocks at the Buzzard Creek maars have the same chemical signature of Aleutian volcanoes.

As he looked back at more than a decade of Denali station data, Holtkamp found 200 similar volcano-like signals. So, is Denali about to erupt?

If Denali was a volcano, the mountain would show its hand with volcanic rocks on the surface as well as hot springs. As for the volcano-like earthquakes, Holtkamp said they don’t require the movement of molten rock, just active fluids passing through masses of rock.

“There might be magma, but only small packets,” he said. “It’s probably water coming from the slab (the Pacific plate, which is diving beneath the North American plate under Denali and most of Alaska). I think it’s evidence that fluids from the slab can migrate through the crust (the outermost shell of the planet).”

Given the uncertainty of science and the surprises the planet often delivers, does Holtkamp rule out the possibility of Denali someday expressing its inner volcano?

He would make that bet for our lifetimes and well beyond. But the workings beneath Denali might change to another state from the present “flat-slab subduction,” which makes the rock beneath the crust too cool to melt. That is millions of years in the future.

“A more traditional volcanic arc may emerge, but not necessarily at Denali,” Holtkamp said.