Like flecks of pepper on chowder, all of the spectacled eiders on the planet are now gathered amid sea ice and steaming open leads in the Bering Sea.

“It’s a mass of life in this desolate area,” said Matt Sexson, who once rode an icebreaker to see the winter gathering south of St. Lawrence Island.

Sexson, a biologist with the USGS Science Center in Anchorage, just handed in a draft of his Ph.D. chapter on the creatures whose wintering place was a mystery for more than a century. He has some ideas about why these “footballs with feathers” are now crowded into cracks in pack ice when other migrants are picking insects off palm trees. 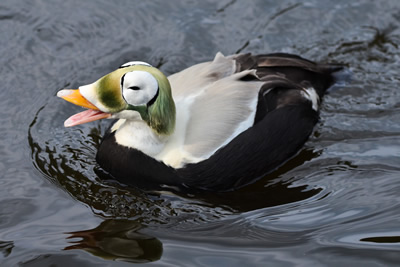 First, some recent history. In the late 1980s, biologists noticed a lack of spectacled eiders in the summertime tundra nesting places the birds prefer. The decline was so steep that U.S. Fish and Wildlife Service officials listed the birds as threatened in 1993. Wanting to know more, biologists captured birds during their brief egg-laying time on land in the Yukon-Kuskokwim Delta. There, a veterinarian performed surgery to implant satellite transmitters within the abdomens of 22 spectacled eiders.

Anchorage biologist Margaret Peterson monitored the signals and was disappointed when all transmitters stopped broadcasting bird locations by December 1994 after working just a few months.

But the story was not over. In February 1995, a transmitter bleated out a signal. Chasing that one data point, biologists Greg Balogh and Bill Larned chartered a twin-engine aircraft. They flew to the reported coordinates, south of St. Lawrence Island in the Bering Sea. They found 25 flocks of eiders, the largest of which was 30,000 birds. They figured the birds were keeping ice leads open with their movement and body heat at minus 20 Fahrenheit and a ripping wind.

In the lee of St. Lawrence Island, Balogh and Larned estimated they saw about 150,000 birds.

Their discovery solved one of the last great puzzles of seabird biology, but raised the question of why birds would spend the entire winter in darkness between gaps in sea ice. 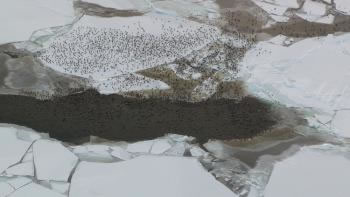 Sexson duplicated Margaret Petersen’s study, capturing birds in northern and southwestern Alaska. From 2008 to 2012, he received more than 7,000 transmitted locations from the birds. Part of his degree work is to compare his results to those found in the 1990s.

The birds’ more recent signals confirmed that they clump in the same areas south of St. Lawrence Island from mid-October until mid-April.

“Most likely, there’s 350-to-370 thousand birds there right now waiting for breakup,” Sexson said. Once snow melts from tundra to expose nesting sites, birds will return to either northern or southwest Alaska, or more likely Siberia.

“Only about five percent of the world’s population breeds in Alaska,” Sexson said. There is not much information on the birds’ lives in northern Russia, so biologists don’t know if Alaska birds dropped in numbers or moved to Siberia during breeding season.

But Sexson and others know the birds spend half of their year in the emptiness of the Bering Sea between St. Lawrence and St. Matthew islands. The northern Bering Sea has plenty of clams and snails, but that prey is available is places that are less bleak. Why spend six months there?

Sexson has a few ideas. One is that male birds court females while they are floating en masse. There, they maximize their chances of finding a mate (they find a new one each year).

Gathering in such a harsh place might be due to “some form of genetic relic,” Sexson said. The birds might be remembering a forgotten landscape from 20,000 years ago, a hypothesis he will check using the birds’ genetic material.

During the last ice age, their current wintering area might have been a shoreline of the Bering Land Bridge. Changing landforms and environmental conditions have doomed other animals, but spectacled eiders may have found a location that has somehow worked for them as their neighbors changed from mammoths to walruses.