Thousands of Alaska mosquitoes are now on sabbatical at the University of California, Davis. They are not pestering suntanned Californians. Researchers are analyzing their tiny corpses to see if the parasites that cause malaria are inside them.

During the last two summers, Ravinder Sehgal and his colleagues captured those mosquitoes in Anchorage, Fairbanks and Coldfoot. The San Francisco State University disease ecologist is part of a team that discovered malaria in several year-round resident birds in both Fairbanks and Anchorage (but not in Coldfoot) in 2011 and 2012. Because the malaria showed up in Alaska black-capped chickadees that don’t migrate, it proves that an Alaska mosquito was responsible for transmitting the tiny malaria parasite by sucking blood from an infected bird (probably a migrant) and pushing its infected proboscis into a local chickadee. 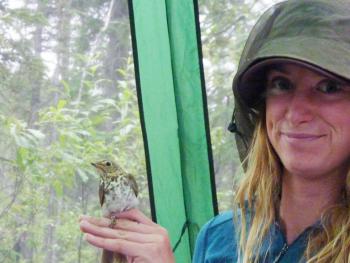 Jenny Carlson of the University of California, Davis with a captured Swainson’s thrush in Coldfoot, summer 2012.
Image by Ravinder Sehgal.

Sehgal’s collaborator, Anton Cornel from UC Davis, collected bags full of mosquitoes with a carbon-dioxide trap because the research team wants to find out which of Alaska’s mosquitoes is able to transfer the parasite.

“We still don’t know which mosquito is transmitting it,” Sehgal said.

“In Hawaii, (malaria) kills birds,” Sehgal said, mentioning that native honeycreepers no longer thrive at lower elevations where malaria-carrying mosquitoes moved in. In Alaska, “it could affect the number of eggs they lay, or perhaps it might make it harder for them to migrate. It’s just something we don’t know about.”

Sehgal spent parts of the last two Julys in Alaska, taking blood samples from birds as far north as Coldfoot, where he and his team set up mist nets “right behind the truck stop.” He also got blood samples from birds at Creamer’s Field in Fairbanks courtesy of biologist Sue Guers of the since-closed Alaska Bird Observatory. Biologists for the non-profit, which closed due to lack of funds last November, operated a mist-netting station at Creamer’s Field for more than 20 years.

“It’s a real shame,” Sehgal said of the Alaska Bird Observatory’s shutdown. “It was a resource not only to Fairbanks residents, but to researchers from all over.”

Also due to a lack of funding, Sehgal won’t be travelling to Alaska this year as he has the past two, though he is very interested in how mosquitoes somewhere between Fairbanks and Coldfoot apparently don’t have the ability to keep the malaria parasite alive throughout its life cycle.

“Somewhere north of Fairbanks, there’s just not enough (summer) for the parasite,” he said.

Researchers have found that mosquitoes can transmit malaria north of the Arctic Circle in both Finland and Norway. Alaska studies make a good baseline measurement to see how the disease may be creeping poleward in North America, Sehgal said.

“It’s going to be spreading with global climate change. We predict it will get up past Coldfoot in the next 80 years or so.”