The dashed line of the Arctic Circle

A friend and I just camped out at the Arctic Circle, about 200 miles north of where we live in Fairbanks.

A dashed line on the map went right through our campsite. That line, the Arctic Circle, traces the northern hairline of the globe, at about 66 degrees north latitude. That means that when sleeping on the circle we were much closer to the North Pole (at 90 degrees latitude and 1,600 miles north) than to Ecuador (0 degrees latitude and 5,700 miles south). 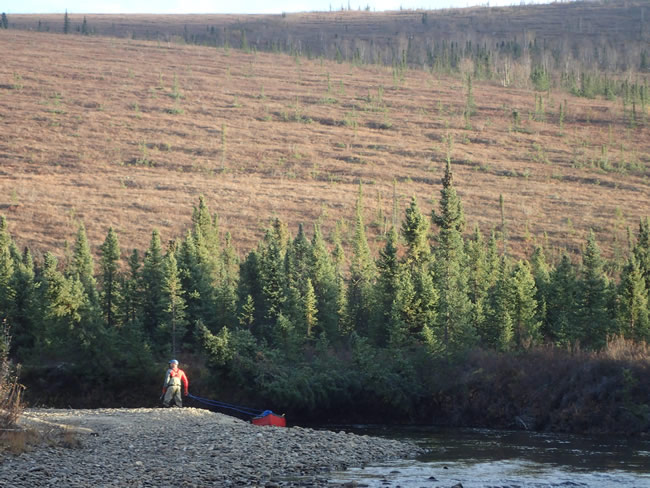 Bruno Grunau lines a canoe up a river on the Arctic Circle. Photo by Ned Rozell.

Our campsite view showed the importance of aspect — the compass direction that a slope faces — here in the far north. Behind us, the south-facing slope taking a direct hit from the sun was full of birch and spruce trees, just like our boreal forest home in Fairbanks. At the other extreme, the north-facing slope in front of us was open, with a few islands of trees but mostly knee-high tundra plants as far as we could see.

Because we were there near the fall equinox of September 22, our days on the Arctic Circle were a few of the least dramatic of the year. On the equinox, the sun shines directly overhead on the equator and daylength is close to 12 hours almost everywhere in the world. The amount of daylight at the Arctic Circle that day was pretty much the same as what people experienced in Miami.

The drama is ahead, though, as everywhere north of the Arctic Circle is now losing daylight in chunks of minutes. Utqiagvik, the northernmost town in Alaska and the U.S., will lose half its daylight this month, from more than 10 hours on Oct. 4 to less than 6 hours by Halloween.

On winter solstice, the top of the globe’s farthest nod away from the sun on December 21, the sun won’t appear to rise in places north of the Arctic Circle. Right here on the circle, and in towns such as Fort Yukon and Selawik, both just north of the circle, daylight will occur on winter solstice because of refraction. Refraction happens when gases in our atmosphere bend the rays of the sun so we can see its disk even when the sun is below the horizon.

While all lands and ocean north of the Arctic Circle are by definition what people are talking about when they say Arctic, not all of the Arctic is the same. Fort Yukon, surrounded by spruce, birch and willows, is very different from Kotzebue, a treeless town at the end of a tundra peninsula jutting into the Chukchi Sea just north of the circle.

In their book Land of Extremes: A Natural History of the Arctic North Slope of Alaska, Alex Huryn and John Hobbie suggested an “ecologically sound” definition of the Arctic. They suggested the Arctic as any area with an average July temperature of 50 degrees Fahrenheit or less. When plotted as a line, that standard somewhat marks the northern limit of trees.

The Arctic Circle proper cuts through the top third of Alaska. Worldwide, only about 4 million people live on the land north of the Arctic Circle, which covers about 4 percent of the Earth’s surface. In Alaska, less than 15,000 of the state’s 740,000 people live north of the circle, most in Utqiagvik (4,400) and Kotzebue (3,245).

Near where the Arctic Circle crosses the Dalton Highway, workers for the U.S. Bureau of Land Management have installed a sign marking the spot. The sign should perhaps be on wheels, because the Arctic Circle is always on the move.

The circle’s exact location depends on the tilt of the Earth. Due to tidal forces of the ocean caused by the orbit of the moon, that tilt is not constant. Earth wobbles on its axis within a margin of 2 degrees every 40,000 years. As a result, the Arctic Circle is now creeping northward by about 50 feet each year.