Caribou on the Run at Fortymile River

Floating down the Fortymile River, we heard the roar of a rapid just ahead. At the same time, we noticed the caribou, about 50 of them, clustered on a cliffside near the water.

It was too late to pull over. I aimed the canoe for the bumps of frothing brown water. As we plunged in, six antlered heads bobbed single-file in front of us. Caribou were swimming across the river at the pinch point. 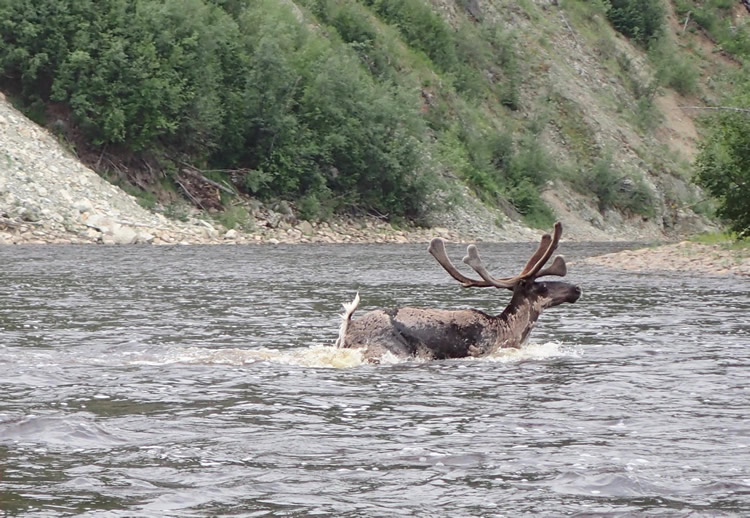 A caribou crosses the Fortymile River. Photo by Ned Rozell.

My neighbor, eight-year-old Nora Carlson, watched from the bow of the canoe as we parted the sea of caribou. As we splashed through, three caribou swam on toward the far bank. Three others saw the red canoe and U-turned back to the rocks from which they had stepped into the water. Nora could have combed the coarse hair of their backs with her paddle.

A few seconds later, we were past the splashy water, and the caribou. We spun into a river eddy and turned to watch the two other boats in our party slip past.

The adult caribou were shedding their hollow winter hair, leaving a dark circle over their vital zones that resembled a target. The calves, born a few weeks ago, were the size of large dogs. Like the adults, the new caribou were good swimmers.

The Fortymile, one of Alaska’s 31 herds of caribou living from the Canada border west to Adak Island, is at a modern high number of about 71,400 animals, according to a July 2017 count by biologists for the Alaska Department of Fish and Game. When we encountered the creatures in mid-July 2018, they were grouped up, which is typical behavior a few weeks after cows give birth.

We were fortunate to be in the thick of them. Before dodging gray/black bodies in the rapid, we named a campsite on a forested lobe of land Caribou Crossing. Just downstream, after sniffing the air, caribou swam across in singles, tens and twenties. They shook off water at the far bank. We saw them whenever we pointed the binoculars that way. The parade continued for 10 hours.

Those moments made me think of the incredible expanse of intact tundra hills, forested valleys and graveled river bottoms that enable the presence of such a large gathering of big wild creatures. It is a rare experience, even in Alaska, where caribou outnumber people.

Though the Fortymile Herd is now at the greatest number in anyone’s memory, biologists think the herd may have consisted of a quarter-million animals in the 1920s. That’s when Fortymile caribou roamed from almost Whitehorse, Yukon, to the village of Tanana, 130 miles west of Fairbanks.

The core country of the herd, occupied even when the herd fell to less than 6,500 animals in 1973, is the wild mountains and creeks surrounding the Fortymile River, which flows from the high country north of Tok to the Yukon River in Canada.

The herd may have reached its peak in the 1920s due to a scarcity of wolves that eat them. On a dogsled trip during the winter of 1922 to 1923, biologist Adolf Murie covered much of the Fortymile country and never saw a wolf track. He guessed wolves might have died in large numbers from canine diseases brought into the territory with miners’ dogs.

The nature of caribou herds is to boom when times are good and to bust when the animals overgraze lichen and other foods during the summer. By the 1960s, hunters noticed that caribou with young calves no longer crossed the Steese Highway north of Fairbanks, biologists including Rod Boertje and Kalin Kellie noted in a 2012 paper. The herd lost animals and shrunk its range until after the mid-1970s crash, when biologists shortened the name from the Steese-Fortymile Herd to the Fortymile.

Thanks to efforts from wildlife professionals, hunters and government leaders, the Fortymile Herd has grown steadily during the last 40 years. Yukon Territory hunters agreed to kill no animals there and Alaska hunters minded regulations to shoot a small number of bulls. Biologists also think the herd has grown because of programs to remove wolves from the herd’s range, good weather conditions since the early 1990s and the herd’s spilling out in winter into areas the caribou had not used for decades.