Pink salmon — too much of a good thing?

Of the five species of salmon that swim Alaska waters, the pink is by far the most plentiful. Some scientists think the fish is an overabundant predator that outcompetes other salmon and some seabirds.

In the late 1990s, Japanese researchers noticed an intriguing pattern while studying in the Bering Sea just north of the Aleutians. During every odd-numbered year, populations of tiny ocean creatures called copepods were very low. The year after, their numbers were high.

About a decade ago, biologists Alan Springer and Gus van Vliet noticed a similar pattern among tufted puffins in a well-studied colony on Buldir Island in the Aleutians. The puffins were laying eggs earlier in even-numbered years and later in odd years. They too wondered if pink salmon might be responsible, by leaving less food for the puffins.

Though they are the smallest of the salmon, pinks are the dominant species in the North Pacific Ocean and Bering Sea. Pink salmon born in hatcheries, where professionals harvest eggs from wild salmon and rear them in captivity before releasing them in the ocean, have doubled in numbers since 1990.

Pinks are different from kings, chums and other salmon species. Their life is just two years long, from the time they are eggs until they die after spawning. While other Alaska salmon spend at least two winters in either the Bering Sea or North Pacific, pinks spend only one year in the saltwater surrounding Alaska before returning to freshwater sources to spawn. They remain small until the last few months before they spawn, when they eat like crazy and their body mass increases by 500 percent.

In that time of pinks’ greatest growth — from about March to July in the spawning year — they may be eating so many shrimp, fish, squid and krill that they are not leaving enough for other species. Their ferocity and eating efficiency could even be affecting birds half a world away, off the coast of Australia and New Zealand.

Short-tailed shearwaters are dusky, gull-like birds that live in the Bering Sea and North Pacific in the Alaska summer and return to nest on islands off Australia during the Alaska winter. During odd-numbered years, the birds arrive south of the Equator with less body mass and tend to nest in fewer numbers. Springer, van Vliet and several of their Australian colleagues wrote about this 9,000-mile connection in a recent paper in the journal Proceedings of the National Academy of Sciences. 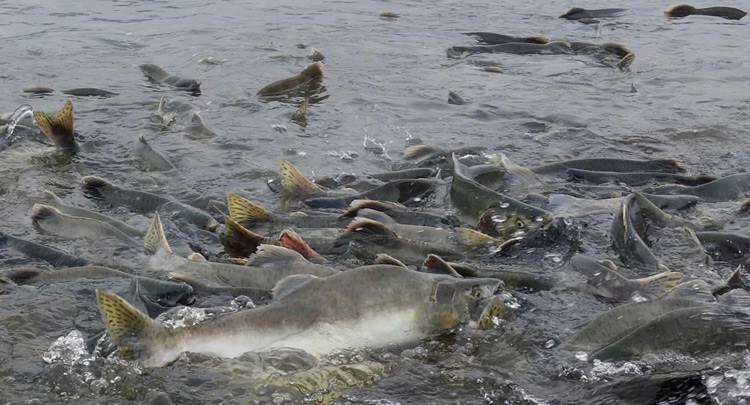 Springer, a research professor emeritus with UAF’s Institute of Marine Science, has pondered the impacts of pink salmon for quite a while. He pointed out that 100 million pinks returned to spawn in Prince William Sound in 2013: 30 percent were wild fish and 70 percent were born in hatcheries.

“There is an obvious strategy in using the oceans as unattended feedlots, but we know that the feed troughs will not be perpetually full, and despite the nutritious protein and fatty acids of free-range salmon, it is time to consider additional issues as well,” Springer wrote in a 2014 paper.

Possible solutions to the excess pink problem are relaxing catch limits for commercial fishermen and reduced hatchery releases of pink salmon each year, but Springer knows both of those are a hard sell.