A float down Alaska’s Tanana River

This is not Henry Allen’s Tanana River. Nor is it the Trail River of people living here thousands of years before the nineteenth-century government explorer struggled his way down the Tanana. But it seems close.

I’m on a family trip down the wide brown river, starting where it arcs from the mountains to Fairbanks. Wife, daughter, dog and I will float the river 150 miles to the town of Manley Hot Springs, where our car is waiting. 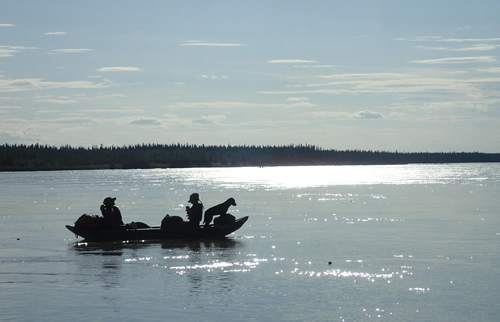 The middle Tanana River, as quiet now as it was a century ago. Photo by Ned Rozell.

When viewed from a hillside or a plane, the Tanana looks like the giant it is: a tan python slithering around wooded islands.

Here on the surface as we launch from near the ghost town of Chena, the river is glassy and gentle. It is also milky with powdered mountain from Alaska Range glaciers. The suspended minerals make the canoe hiss. U.S. Geological Survey scientists once estimated that the river carried six million pounds of sediment each hour past Fairbanks, and that half of the Yukon River’s load of liquid dirt comes from the Tanana River.

The Tanana drains the north side of the Alaska Range and much of the hills and swamps of Interior Alaska. Its watershed is larger than Virginia. The river flows 660 miles from near the village of Northway to where it rams the Yukon near the village of Tanana.

All this water of questionable depth is tough to quantify, but according to USGS scientists the amount of water moving us along at 5 miles per hour is like 61,000 of my 5-gallon water jugs flowing by each second of the day. The Tanana moves about as much water as the Arkansas River, but in half the length.

Though the sky is dark with rain clouds, smoke softens the hills and makes the air smell sweet like a driftwood fire. During this trip in mid-August, the total acreage of burned Alaska will creep above 5 million acres, making this the third largest recorded fire season in the state (2004, with 6.5 million acres burned, is No. 1).

The blade of the paddle disappears beneath the silty water, making me wonder how anything could live in it. We stop at the camp for the Fairbanks Folk School’s Week on the River, 30 miles downriver from the city. There, we taste evidence of invisible life swimming upstream.

Jenna Hertz, co-leader of the Week on the River with her partner David Jonas, is searing chum salmon in a cast-iron skillet over a driftwood fire. She offers some. The strips are fatty, smoky and fire the salivary glands. Campers caught the fish in a gill net set up in an eddy nearby.

More obvious life forms are the peregrine falcons that broadcast their worrisome screech from naked bluffs where the young birds were born in early summer. Now, the mated pairs are joined by one or more chicks, already full size and about to leap off the rocks and leave Alaska. Other migrants, like yellow warblers on their way to Baja, are staging in the tangled willows.

This stretch of river is, for the most part, silent. As we depart Nenana, the river shoots straight north for 30 miles. The terrain pancakes to boreal forest beneath big sky. Here, we float over what seismologists call the Minto Basin, where a hidden fault beneath a self-healing mucky surface has caused some significant shakes in recent years. Somewhere out here, Geophysical Institute scientists have installed instruments to help them understand a fault zone that responded to the distant shaking of a huge Sumatra earthquake with one of its own.

In this grand flat, after a long day of paddling, we come upon an unusual structure near the mouth of the Tolovana River. The building is 80 feet long and painted canary yellow with brick-red trim around the windows.

The door of Tolovana Roadhouse has no lock. A sign: “Use it if you need.”

My daughter’s feet are cold. It is 11 p.m. We swing open the door and step back a century. In the main room of four, we get a spruce fire snapping in a barrel stove and look around at the log structure. Now owned by Leslie Goodwin and Dave Williams of Fairbanks, the roadhouse was built in 1924 by Henry Martin and his wife Ida.

One year after its construction, Tolovana Roadhouse was the first stop in the Serum Run, when mushers carried a 20-pound package of diphtheria antitoxin from Nenana to Nome. In January 1925, Wild Bill Shannon carried the package inside the roadhouse to warm it. He then handed it to another musher who carried the drug to Manley Hot Springs, about 40 miles away. Twenty mushers carried the antidote 674 miles to Nome in less than six days. Tolovana Roadhouse is the only relay point still standing from that historic event, the last glory of dog freighting before the airplane appeared in the territory.

Downstream of the roadhouse, the river broadens, feeling like the Yukon. Unlike explorer Henry Allen, we are not driven by hunger to cover 50 river miles a day for possible resupply on the Yukon. We take two days to cover the 40 miles to the Manley Hot Springs boat landing.

But like Allen, who in summer 1885 travelled 1,500 river miles to our 150, we are surprised to see no moose or caribou over this stretch of river, one that still maybe feels like it did back then.