In late July, more than 300 wildfires are burning in Alaska. With burned acreage totals one month ahead of the historic 2004 fire season, summer 2015 is again the year of the wildfire.

Many scientists are not surprised. In papers written a few years ago, Alaska researchers and others suggested smoky years like this one will be the norm for a few decades as hardwoods replace the spruce of Interior Alaska. The boreal forest, a swath of spruce-dominated woods from Interior Alaska to the Atlantic Ocean, might be in for a big change. 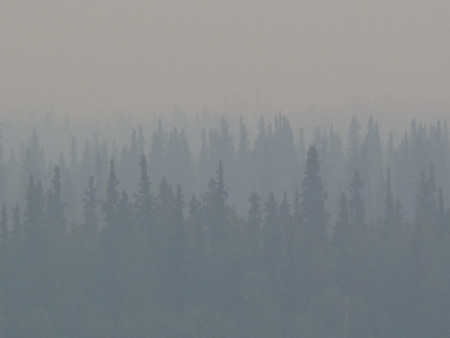 Burned Alaska forest might be the start of a different ecosystem. Photo by Ned Rozell.

“Results suggest that a widespread shift from coniferous to deciduous vegetation began around 1990 and will continue over the next several decades,” wrote UAF researcher Dan Mann in a paper published in 2012. “Our modeling results support previous inferences that Alaska’s boreal forest is now shifting to a new ecological state.”

And what might that state be? Terry Chapin of UAF wrote in 2004 that with an increase of temperature of 2 degrees C, aspen parkland or grassland could replace white spruce forests. Interior Alaska has worn those colors before, during a period a few thousand years ago when summer temperatures were 1 or 2 degrees warmer than they are today.

Mann wrote that Alaska’s future forest may look like the mixed woods of southern Canada. Aspen trees dominate in Alberta, which is warmer and dryer than Interior Alaska.

Over the years, the boreal forest’s stores of flammable black and white spruce have bulked up to where they cover much of the Interior Alaska landscape.

“According to the model, the ecological threshold now being crossed in Interior Alaska is the result of a fuel-load legacy encountering rapid summertime warming,” Mann wrote.

In 2012, now-retired UAF forest science professor Glenn Juday told a roomful of scientists at a San Francisco conference that the boreal forest was suffering in Interior Alaska and doing well in — and perhaps shifting to —western Alaska. His observations were based on his measurements of trees made on trips down the Tanana, Yukon and Kuskokwim rivers.

“The prospects are not good for survival (of boreal forest trees, including birch and aspen),” Juday said then. “This overall, coherent shift is not just an unlucky break at a stand or two, but is consistent with the first stages of a serious rearrangement of forest in the landscape across northern Alaska.”

The vegetation-disturbance model upon which Mann based his paper predicted that increased wildfire activity in Interior Alaska would continue until least 2040.

“This summer’s fires may fit into the larger, longer process of a biome in the throes of transition to a new state,” Mann wrote in an email. “To get to that new state, many of the old ecosystems comprising our familiar boreal forest must be burned away.”

Mann, who likes to think about ancient landscapes and their transformations to what we have today, said there are a lot of uncertainties as to what plants will colonize Interior Alaska in the future.

“Everything in nature changes, but it’s often a long time between these changes,” he said. “What’s unusual about the present day in Interior Alaska is that we are poised at the brink of what could be a very rapid change.”