Skip to content
Previous Next
Denali has the clearest air of any monitored U.S. national park

Denali has the clearest air of any monitored U.S. national park

Fairbanks’s air turns bitter every winter as we fill it with woodsmoke and other things, but just down the road Denali National Park has the clearest air measured among America’s monitored national parks.

Scientists at Colorado State University have taken a close look at Denali air as captured near the park entrance. A monitor there pulls air through a set of four filters, getting samples every third day. A park employee then mails the filters to the Lower 48. 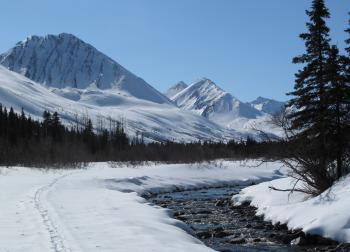 Denali has the clearest air of any monitored U.S. national park.
Photo by Ned Rozell

Postdoctoral fellow Qijing Bian and her advisor Sonia Kreidenweis studied the particles less than 2.5 micrometers in size trapped at the Denali station from 1988 to 2013. It takes dozens of specks that size to bridge the width of a human hair, but they combine to reduce visibility and are small enough to make it past our noses and into our lungs. Due to its temperature inversions and 100,000 people staying warm in the subarctic, Fairbanks has a problem with a buildup of PM (particle matter) 2.5.

Denali is squeaky clean in comparison, but Bian found a few invaders that drifted through the gates.

Bits of burned tundra and trees show up in the filters in summertime, especially in years like 2004 when wildfires burned an area of Alaska the size of Vermont.

Sea salt from the northwest coast and other areas finds its way to the park in winter, when there are high winds, low temperatures and some open water.

In spring, the samples show a “bromine explosion” Bian thinks is due to a natural process. It happens like this: When sunshine returns to the far north, it reacts with the salt in sea ice, frost flowers and snow, releasing molecules of bromine monoxide. Bromine monoxide can react with gaseous form of mercury to create a toxic product that falls out on land. It can also destroy ozone molecules.

In April, May and June, the Denali sensor captures a good amount of dust that carries iron and silicon. UAF’s Cathy Cahill once traced these specks to giant windstorms in the Gobi Desert. Rivers of wind carry the dust over the Pacific, where some of it rains out over Alaska.

Denali’s air sensor also tastes industrial pollution that is probably from Russia and northern Europe. Bian saw copper and lead that she thinks is from Norilsk, Russia. Even though Norilsk is farther from Denali Park than Denali Park is from Denver, springtime air masses carry Norilsk’s pollution along the top of the globe. Bian said the heavy metals seem to have decreased from 1988 to 2013, possibly because of better emission controls at metal-processing facilities in Norilsk, known as the most polluted city in Russia.

But even with a few dirty particles, Denali air is good stuff. In a 2013 report on air quality in national parks, Denali was the only park in the country with visibility rated “in good condition,” while 156 others warranted ”moderate concern” and 189 “significant concern.”

Alaskans can see just how lucky we are when Denali is visible from Fairbanks or Anchorage, each more than 100 miles from the mountain.