Skip to content
Previous Next
Tidal stresses and giant earthquakes

A scientist once noticed a connection between the stress that tides inflict on the planet and the number of small earthquakes that happen in some areas when that pressure is greatest. She saw a pattern to these earthquakes leading up to great tsunamis. A graduate student is now looking for a similar signal in Alaska.

Yen Joe Tan of Columbia University is combing through a database of offshore Alaska earthquakes to see if there is any link between the number of small earthquakes triggered by tides and great earthquakes that send tsunamis racing thousands of miles. 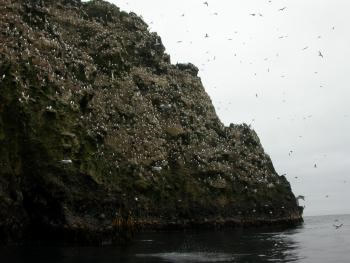 Buldir Island, with its tremendous population of seabirds, is just north of the Aleutian Trench, home to giant earthquakes.
Photo by Ned Rozell.

How might tides cause earthquakes? At high tide, more water piles on top of geological faults, adding to stress that’s already there. If the fault is close to slipping, the tides can trigger small tremors. Solid ground also responds to the gravitational pulls of the moon and sun. Joe Tan is looking at the combined effects of ocean and Earth tides.

A Japanese researcher has studied the relationship between tides and earthquakes. Sachiko Tanaka of the National Research Institute for Earth Science and Disaster Prevention in Tsukuba, Japan, found that tidally triggered earthquakes were common off the northeast coast of Japan several to 10 years before the magnitude 9 earthquake that triggered the tsunami in 2011. She found similar results when she went back and looked at data from around Sumatra before the 2004 tsunami.

“She showed a small nudge by tidal stress can push it over the limit,” Joe Yen Tan said.

Using records of past earthquakes, Yen Tan wants to see if any parts of the Aleutian Arc are perhaps giving the same signals. Though his data are much more sparse than that available to Tanaka, he has seen three areas that seem to increase in seismicity when tidal forces are high. Those zones are southeast of Kodiak, south of Tanaga in the central Aleutians and south of Buldir in the western Aleutians.

“They might be currently critically stressed,” he said of these areas.

The potential for a giant earthquake along the sweep of the Aleutians is no secret. When U.S. Geological Survey scientists and others last year imagined an earthquake/tsunami scenario that would affect millions on the anniversary of the 1964 Good Friday earthquake, they chose a fictional magnitude 9.1 epicentered just south of Sand Point. The Alaska effects would be terrifying and deadly, and the researchers estimated the resulting tsunami would inundate the ports of Los Angeles and Long Beach, crippling a supply system we all depend upon.

Yen Joe Tan hopes to see if his approach of using statistics could be useful in improving forecasting earthquakes in great subduction zones, like the one where southern Alaska meets the sea.