Researchers at the Poker Flat Research Range sent four rockets into an aurora filled sky early this morning. The four launches were successful and appear to have produced data that will help researchers understand turbulent air currents in the upper atmosphere, said Sue Mitchell a spokeswoman for the University of Alaska Fairbanks Geophysical Institute. Mitchell was at the Steese Highway rocket range until about 2 a.m., she said. “They were getting the data and everything seemed to be successful,” she said. 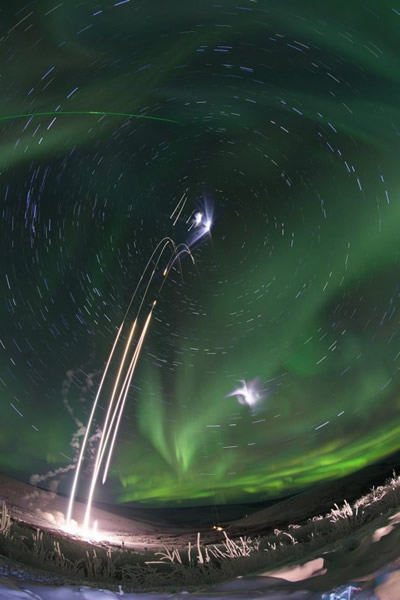 Two teams collaborated to launch the four rockets. One team was led by Rich Collins from the University of Alaska Fairbanks, the other by Miguel Larsen at Clemson University. Larsen’s rockets released a gas called trimethyl aluminum, which glows green when it reacts with oxygen. His team will use images of the gas dispersal to better understand turbulence. Researchers have been in position to launch since Jan. 13, waiting each night for the clear weather they needed for their experiments. Monday’s opening was just in time; their launch window closed Tuesday. A fifth rocket did not launch Monday. That launch is a separate aurora research project operated by a Utah State team. The launch was delayed, someone ironically, because the aurora was too strong Monday morning, Mitchell said. The rocket is expected to measure the aurora above Kaktovik, on the North Slope, and the strongest aurora was farther south Monday morning. The Utah State rocket may launch later this week.

From the NASA website: The NASA Auroral Spatial Structures Probe (ASSP) is a mission to measure both the spatial and temporal variation of the energy flow into the upper atmosphere in and around the aurora. Electromagnetic energy is generated when the solar wind interacts with the Earth’s magnetosphere and flows into the Earth’s upper atmosphere. ASSP is the first NASA sounding rocket mission to make use of a constellation of mini-payloads to observe both the spatial pattern and temporal variations associated with this energy. Seven payloads will fly in rapid successions through the same volumes of space making sensitive observations of electric and magnetic fields. The energy flow, computed from both of these measurements, will allow scientists at Utah State University to understand when and where the Earth’s thermosphere will heat and expand due to the Joule heating process. 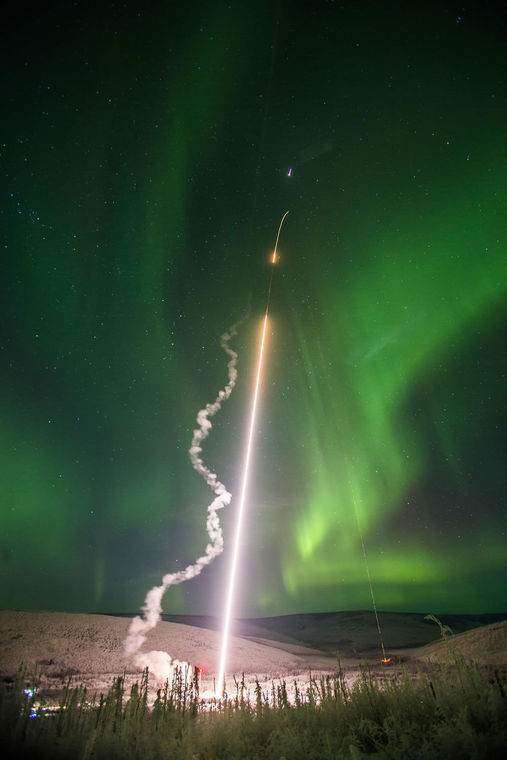 Satellite drag is diffcult to predict without a precise understanding of the state of the thermosphere which limits the ability to forecast satellite trajectories. This is especially true during geomagnetic storms when large amounts of electromagnetic energy are dumped into the thermosphere and dissipated through the Joule heating process. The data from ASSP will be combined with ground-based observations of winds, large-scale electric field patterns, and auroral images. This research is focused on understanding the importance of small spatial scale and rapid temporal fluctuations of electromagnetic fields relative to slow and larger-scale electrodynamical processes. The end result will be an increased understanding of Joule heating and ultimately the processes that lead to global temperature changes in the thermosphere.